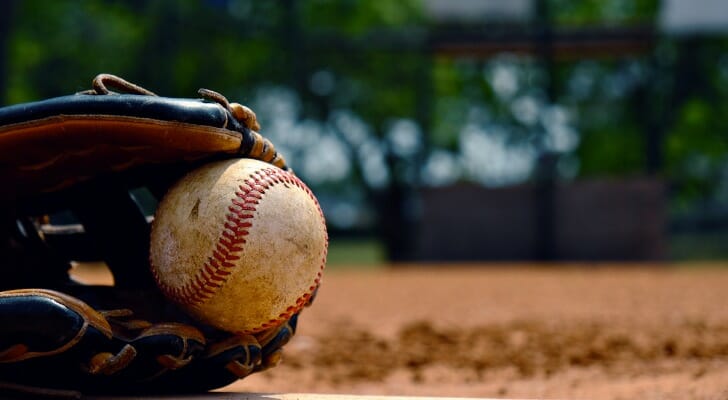 While Major League Baseball is what you are most likely to see on television, baseball fans in cities across the country flock to the ballpark to watch the stars of tomorrow hone their craft in Minor League Baseball. These games are less expensive and less crowded than the average Major League game, so they are more accessible to the average family. With that in mind, SmartAsset analyzed the data for the sixth consecutive year to find the best minor league baseball towns in America.

To find the best towns for minor league baseball, SmartAsset analyzed nine different factors. We used those metrics to come up with two scores – one related to the game-day experience and the other related to the quality of life in the city. We used these two scores to create our final rankings. For details on data sources and how we put it all together, check out the Data and Methodology section below.

This is SmartAsset’s sixth annual study of the best minor league baseball towns. Check out the 2018 version here. 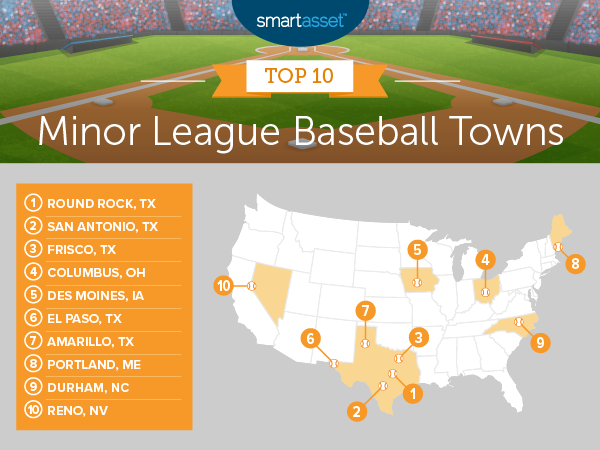 1. Round Rock, TX (Round Rock Express)

Topping our list is Round Rock, Texas, home of the Express, a Triple-A affiliate of the Houston Astros. Round Rock does fairly well in both game-day and quality of life metrics. It has the 11th-highest attendance, an average of 7,849 fans per game. It also has a decent record, winning 60% of games this year. The median income after housing costs is $60,455, the ninth-highest of all 157 cities we considered in this study, which hopefully means some extra cash for fans to spend on a ball game or two.

San Antonio, Texas comes in second on our list. The San Antonio Missions average 7,578 fans per game, a whopping 122% of their stadium’s capacity (the highest rate for this metric in the study overall), showing fans really want to see the Triple-A team in action. San Antonio also ranks in the top 30 in two of the quality of life metrics, with a low unemployment rate of 3.2% and a high dining and entertainment establishment rate of 11% of all establishments.

Another Texas city comes next: Frisco, home of the RoughRiders. This is the highest-ranked Double-A class team. This affiliate of the Texas Rangers averages 6,802 fans per game, and though the team isn’t knocking it out of the park when it comes to game-day scores, Frisco does well in quality of life metrics. The median income after housing costs is $98,465, the highest in our study. The violent crime rate is eighth-lowest in the study, with just 102 incidents per 100,000 residents.

The Columbus Clippers in Ohio, ranking fourth in the study, are the Triple-A affiliate of the Cleveland Indians and close to the top of this study in terms of game-day score. The average attendance of 8,684 is second-highest in the study, and the team is in the top 25 performance-wise, winning 58% of its games. Quality of life metrics for Columbus are not quite as strong as those for other top-ranking minor league baseball towns, but 10% of the city’s establishments are dedicated to dining and entertainment.

Des Moines, Iowa, the home of the Triple-A Iowa Cubs, takes the No. 5 spot. The Cubs have an average attendance of 9,299 fans, the best rate for this metric in the study. That’s 81% of the stadium’s capacity, a top-25 rate. Des Moines’ unemployment rate of just 2.7% is also the 10th-lowest in the study.

We’re back in Texas for the sixth city on our list, El Paso, where the Chihuahuas are the Triple-A affiliate of the San Diego Padres. The team ranks in the top 30 of the study overall for both attendance (5,759 per game on average) and record (winning 57% of games). The city has a low rate of violent crime, just 379 per 100,000 residents.

The final Texas city in the top 10, and ranking seventh overall, is Amarillo, home of the Sod Poodles, a Double-A team affiliated with the San Diego Padres. The team has a 90% attendance rate, 10th-highest of the cities we analyzed. The median income after housing costs is $40,962, a top-35 rate.

Portland, Maine is eighth on our list. The Portland Sea Dogs are the Double-A affiliate of Boston Red Sox. Portland scores in the top half of the study for all of our quality of life metrics. There is a violent crime rate of just 277 incidents per 100,00 residents and a low unemployment rate, just 2.3%. The team didn’t do great on the field this year, winning just 49% of games, but the team still averages 5,677 fans through the turnstiles each game.

Durham, North Carolina takes the No. 9 spot and is home to the Durham Bulls, the Triple-A affiliate of the Tampa Bay Rays. The Bulls average 7,668 fans per game, 77% of its stadium’s capacity. They had a good year on the field, winning 54% of their games. Around 10% of the establishments in the city are dedicated to dining and entertainment. The unemployment rate is fairly high, though, at 4%.

Rounding out the top 10 is Reno, Nevada, home of the Triple-A Reno Aces, an affiliate of the Arizona Diamondbacks. The team fills 95% of its stadium capacity, the eighth-highest rate in the study, and has the seventh-highest total average attendance, 8,542 fans per game. Reno ranks in the better half of the study on three of five of our quality of life metrics: property crime rate, income after housing costs and unemployment rate. 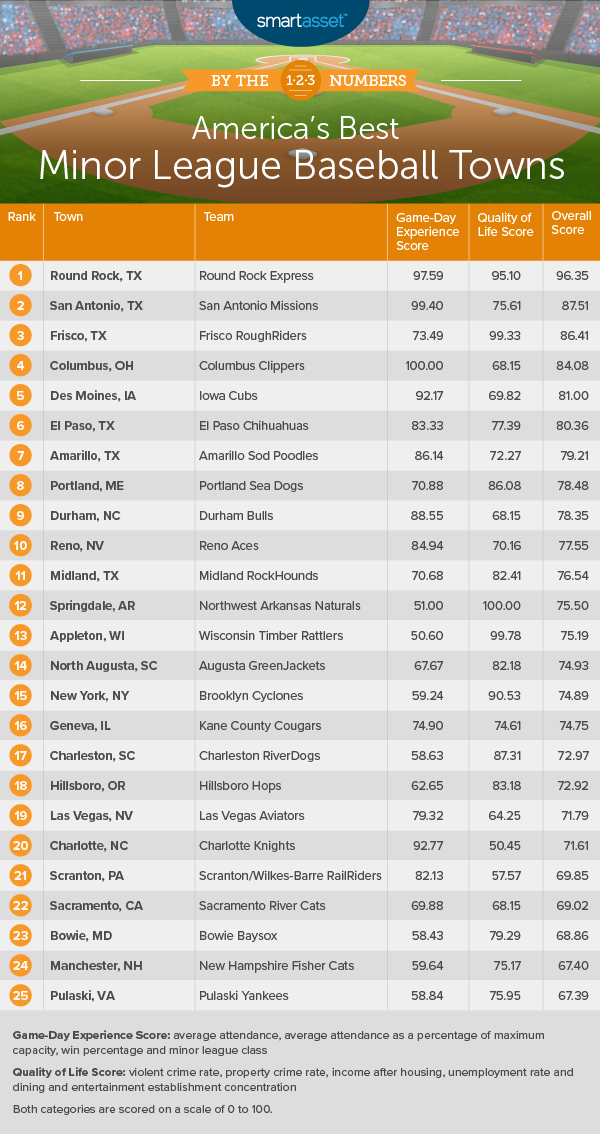 To find the best minor league baseball towns in the country, SmartAsset analyzed the following metrics:

First, we ranked each city in each metric. We created separate indexes for the quality of life metrics and for the game-day experience metrics, assigning a score to each based on their rankings in each category. Every metric received equal weighting, except for the two crime metrics, which received a half weight. Then we averaged the two indexes to come to a final score. We ranked cities from highest to lowest based on this final score.