5 Reasons You Can’t Save Money 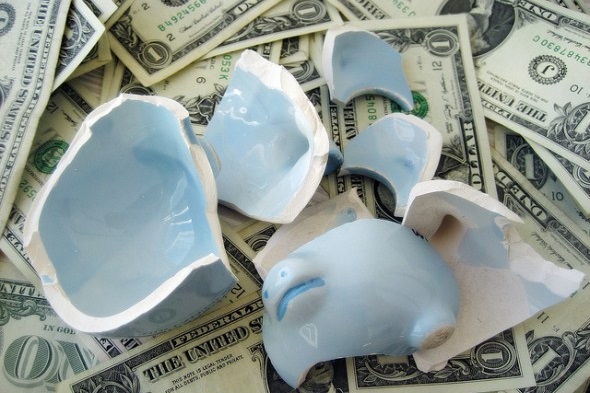 Most people know how to spend money but learning how to save money is an entirely different story. The Federal Reserve puts the personal saving rate at just 4.8% of disposable income, as of May 2014. While the overall saving rate has improved in the post-recession area, Americans for the most part still aren’t socking away nearly enough dough. If you’ve been trying to develop your saving muscle but haven’t had much success, these common money blunders may be the reason why.

1. Working Without a Budget

Writing out a budget each month lets you see exactly where your money’s going and not having one puts you at a serious disadvantage when you’re trying to save money. You may plan to set something aside but what inevitably happens is you wind up at the end of the month with no extra cash to spare. Making a budget gives you control over every penny so your savings doesn’t come up short.

Having a specific goal or target you’re trying to reach helps you to stay focused on what it is you’re trying to achieve. If you don’t have a goal in mind of how much you want to save or what you want to use the money for it’s easy to let other things take priority. Take some time to think about what your goals are and what you’re willing to sacrifice to achieve them. The more specific you are about what you want to do the easier it is to create a plan for getting there. A savings calculator can help you see how your efforts will grow your money and reach that goal.

3. Not Preparing for the Unexpected

Life happens and everyone experiences their share of financial setbacks at some point. The car breaks down or the refrigerator goes out and suddenly you’ve got to cover an extra expense of several hundred or even several thousand dollars. The money that you were planning to put in your savings account suddenly gets swallowed up by something else or worse, you end up charging it to a credit card.

An emergency fund is a buffer of cash that insulates you against the unexpected. Building a small emergency fund before you get started with your other savings goals means you won’t be derailed if something pops up out of the blue. Even if it’s just a few hundred bucks, having that extra money on hand can make a huge difference to your bottom line. Then it’s a good idea to work towards having 3-9 months’ worth of expenses saved in that emergency fund for a major setback like job loss or a medical crisis.

Many financial experts would tell you that saving money while you’re still in debt is an oxymoron. You may have money in the bank but if you owe the same amount or more to your creditors you’re actually in the red. Chances are, you’re paying much more in interest on the debt than you’re earning from your savings account so you’re that much more in the hole. So it’s a good idea to secure that small emergency fund (of maybe $1,000) and then aggressively tackle your debt.

The faster you get rid of your debt, the more money you’ll free up to put into savings but you’ll need a plan for paying it off. Some experts argue that the best way to get rid of debt is to pay down the smallest balances first and snowball your payments over time. Others would argue that it’s better to tackle the debts with the highest interest rates first since those are the ones that are costing you the most money. Which method you choose isn’t as important as making sure you stick with it for the long haul.

5. Making Excuses Not to Save Money

It’s easy to make excuses about why you can’t save money. My parents never taught me about money. I’m just no good with numbers. I don’t make enough to save money. These are just a few of the mental roadblocks you might be putting in the way of your path to saving. Until you defeat these bad money attitudes, you’ll find it difficult to really get serious about becoming a saver. Changing how you view money may not happen overnight but the more work you’re willing to put into it the bigger the pay off will be.

Being able to save money shouldn’t be an elusive goal. Unless your income is extremely tight you’ve probably got room in your budget to sock away at least a few dollars on a regular basis. Even if you start small, you’re building the foundation for a solid financial future. An interest-earning savings account can accelerate the process.