The Best Cities for Electric Cars 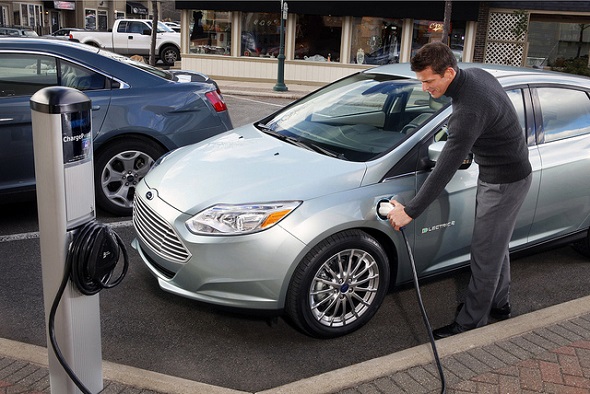 In 2014, total U.S. sales of plug-in electric vehicles (EVs) hit 118,000. This was a 27% increase over 2013 and the first time in history that electric vehicle sales have reached six figures. While those numbers seem to promise a bright future for electric cars, another development threatens to knock EVs right off the road: plummeting gasoline prices. With the price of a gallon of regular gasoline at a five-year low, consumers thinking about going electric face a difficult financial choice. EVs may be cool, quiet and clean, but if they can’t compete with traditional vehicles on cost, it will be difficult to claim a significant share of the automobile market.

To determine where (and if) electric vehicles make financial sense, SmartAsset compared total costs of ownership for three of the most popular EVs—the Tesla Model S, the Ford Focus EV and the Nissan Leaf—to ownership costs of their gasoline-powered equivalents. In our analysis, we considered retail price for a new vehicle (although buying used may be the smarter choice), fuel and energy prices, state and local taxes, state and federal subsidies and average miles driven. (Read more about our methodology below.) 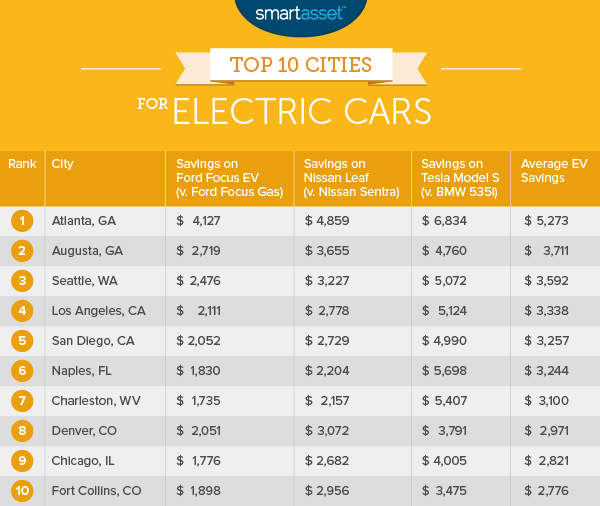 Thanks to the state of Georgia’s generous subsidy program for electric vehicles, which features a tax credit worth 20% of the price of any zero-emission EV (up to $5,000), residents of Atlanta could save an average of $5,273 by buying electric. This makes the ATL the best U.S. city to save money by going electric (in addition to being in the best county in Georgia to save money with a refinance). [Editor’s Note: Since this analysis was done, the Georgia governor has eliminated the subsidy for electric vehicles. It will no longer be available after June 30th.]

As in Atlanta, drivers in Augusta who are interested in buying an electric car will benefit greatly from Georgia’s strong incentives for EV purchasers. The main difference between Augusta and Atlanta, when it comes to EVs, is that drivers in Atlanta spend more time (and drive more miles) in their cars. According to the Federal Highway Administration, residents of Augusta drove 10,744 miles per capita in 2012, while Atlantans drove 13,530. That means extra savings for EVs in Atlanta, since electric vehicles generally cost less to operate on a per mile basis.

Electric car owners in the Puget Sound region benefit from the state of Washington’s cheap, mostly hydroelectric energy, which, at an average of 8.83 cents per kilowatt-hour, is the cheapest in the nation (not to mention the cleanest). Sweetening the deal is the sales tax exemption on EVs for Washington state residents. With a tax rate of 9.5% in the city of Seattle, that adds up to between $2,700 and $6,500 in savings for the three electric cars in our analysis.

Teslas are becoming increasingly popular in Los Angeles and with good reason. Our analysis found that for the average LA driver, the total cost of a Tesla is about $5,124 less than a comparable BMW. For drivers in a position to take advantage of one of the three “super-charging” stations in the LA area, the difference may be even greater. At these stations, Tesla owners get to charge their vehicles for free, and in a fraction of the time it takes to charge at home. EV drivers also benefit from the State of California’s $2,500 rebate for battery-powered electric vehicle purchases.

Among the benefits that California electric car owners receive is eligibility to drive in carpool lanes without any passengers. This is especially helpful in San Diego, which is often rated among the most congested cities in the U.S. Of course, EV owners in the fast lanes should be prepared to suffer the scorn of other drivers who remain stuck in traffic and burning gas.

Unlike drivers in many of the other cities on this list, electric car owners in Naples (which is also one of SmartAsset’s best places for retirement) do not benefit from any state EV incentive programs. What’s driving their high ranking is mileage—Naples drivers put in over 20,000 miles a year, among the highest of any city in our study. Since electric cars cost less to run than traditional automobiles, more miles mean more savings.

West Virginia is coal-country, with coal-fired electric power plants contributing 95% of the state’s energy as of 2013. So, while owning an electric car in Charleston won’t necessarily be any cleaner than a gas car, it will be cheaper. The state average electricity rate is among the lowest in the country, at 9.7 cents per kilowatt-hour.

According to our analysis, the average EV owner in Denver will save $2,971 over the life of his or her car ownership. The source of those savings? Colorado’s EV tax-credit, which ranged from $5,000 to $6,000 for the three vehicles we considered. Just remember: you can only claim that credit if you have state taxes of that amount or greater. Given that Colorado’s state tax rate is 4.63% of taxable income, that means you’ll need to be earning six-figures to get the full EV tax-credit.

While EV owners in Chicago may save money, they may have to sacrifice some convenience to do so—especially in the winter. According to a recent study by AAA, electric vehicle range (i.e. the distance an EV can drive without needing to recharge) falls significantly in cold weather. At 20 degrees Fahrenheit, the average range of the EVs in that study (which included a Ford and a Nissan but not a Tesla) fell by 57%, from 105 miles to 43 miles.

According to the Federal Highway Administration, the per capita mileage of the Fort Collins area is just 9,006 miles, lower than any other metro area on the list. While that low level of driving means less savings for EV owners, it also means lower costs of vehicle ownership overall, a good tradeoff.

The Worst Cities for EVs

To determine where electric vehicles make the most financial sense, SmartAsset calculated total costs of ownership for three electric vehicles and three gasoline-powered comparables. Specifically, we compared the Ford Focus EV with the Ford Focus, the Nissan Leaf with the Nissan Sentra and the Tesla Model S with the BMW 535i xDrive. For the Nissan and the Tesla, we chose the comparable based on vehicle specs including horsepower, size and interior features.

For each of those six cars, we calculated the total costs of ownership as follows (we assumed car-buyers could claim the full amount of any tax credits).

With those formulas, we calculated the purchase cost and the value of annual costs over six years. Six years is the average length of vehicle ownership in the U.S., according to the industry research group IHS. We combined those two costs to produce the total cost of ownership for each vehicle.

As a final step, we averaged the three separate cost-differential numbers for each city. The top cities in our study are the cities that had the highest average savings for the three electric vehicles.

The data used in our study comes from the U.S. Census Bureau, GasBuddy.com, the Federal Highway Administration, the U.S. Energy Information Administration and fueleconomy.gov.

Question about our study? Contact us at blog [at] smartasset.com.