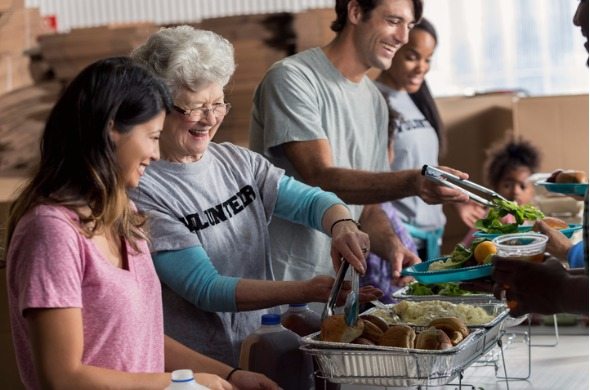 The United States is the second-most generous country in the world, according to 2016 data from the Charities Aid Foundation. But not all states in the United States are equally generous. Residents in some states give more to charity or volunteer more free time to causes near and dear to their hearts. Below we rank the America’s most charitable states using those and other metrics. 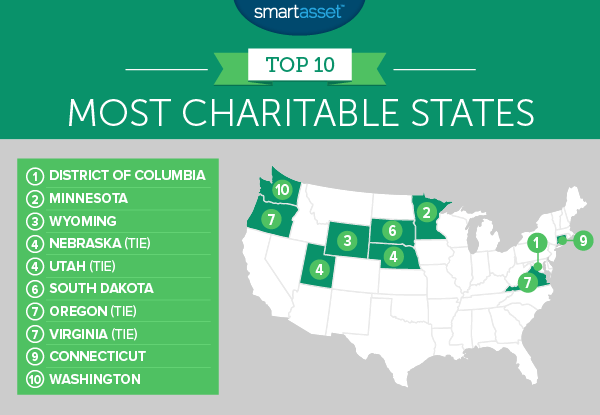 The nation’s capital retained its title as the most charitable in the country. Washington, D.C. has the highest concentration of non-profits in the country, according to our data. Residents here also volunteered their highly valued time to a variety of causes.

Our data shows the average D.C. resident’s volunteer time is worth $1,470, the second-most in the country. Residents here also donate the most to charity. According to IRS tax data, the average Washington D.C. resident donates over $1,400 to charities each year.

In total, this volunteer time is worth over $960 per year. That’s equivalent to 1.5% of the average Minnesota’s household income.

Last year’s second-most charitable state takes third in 2017. Wyoming scored well due to the large number of non-profits in the state. Our data shows that there are over 71 non-profits per 10,000 residents. For that metric, Wyoming ranks sixth.

Almost one in three people in the Corn Husker State volunteer for a charitable cause. By volunteering, Nebraskans are helping in two ways: They help make sure the charitable work gets done and also help charities save money.

Our estimates show that the average volunteer’s time is worth about $900 per year in Nebraska, which is money charities would otherwise have to spend hiring workers.

No one is more generous with their time than Utah residents. Our data shows that over 43% of residents in Utah volunteer. For that specific metric Utah ranks first and it’s not particularly close. Minnesota has the second-highest volunteer rate at 35%.

All that volunteering is worth quite a bit to charities in the area. According to our data, the average Utah volunteer’s time is worth almost $2,000 per year. Combine that with the annual $1,200 that Utah residents give to charities and you can see why Utah made our list.

There are almost 74 non-profits per 10,000 residents in South Dakota, the fifth-highest rate in the country. Over 35% of residents here volunteer, suggesting giving back to the community is a commonly shared ideal in the Mount Rushmore State.

In total South Dakota ranks above-average in every metric we analyzed.

Volunteers’ time in the Beaver State is worth $978 per year, or the seventh-most in our study. Oregon also scores well in other metrics like percent of residents who volunteer and the concentration of non-profits.

According to our data, just over 31% of residents in Oregon volunteer. On average Oregonians put in 40 hours per year volunteering. This state also has 51 non-profits per 10,000 residents.

Virginia ranks seventh tied with Oregon. Residents of the Old Dominion State have an average volunteer value of $1,140 per year, the third-most in the country.

The reason Virginia volunteer time is worth so much is because they spend so much time volunteering. The average Virginian commits 42 hours per year to volunteering and over 30% of residents volunteer.

Connecticut taxpayers are a generous bunch. According to our data, the average Connecticut resident gives just under $1,000 per year in charitable contributions, the fifth-most in our study.

The Constitution State’s volunteers’ time is worth an average of $834. That’s the 18th-most in the country. Additionally, the state has 52 nonprofits per 10,000 residents.

Our list ends in the Pacific Northwest, home of the 10th-most charitable state in America, Washington. Residents here seem to prefer to volunteer their time rather than their money, although they do a quite a bit of both.

Volunteer time in Washington is valued at $1,081 per resident, fifth-highest in the country and the average resident donates $791 per year. The most popular volunteering activity in Washington is fundraising, according to our data.

Did you know you could deduct your charitable donations from your taxes? Here are some tips to make the most out of your giving.