The Best Cities to Pay Off Student Loan Debt 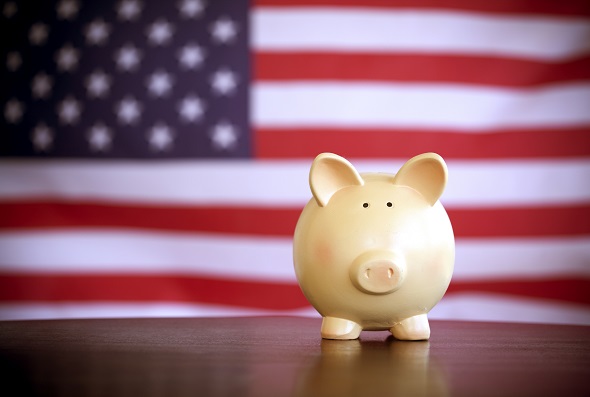 According to a report from the Institute for College Access & Success, the average 2014 graduate with loans owed nearly $29,000. With that much debt, paying off student loans can seem nearly impossible for a new graduate. And it isn’t just the amount of debt that can make repayment difficult.

Among the other obstacles to debt repayment for new graduates are rising housing costs, stagnant wages and a tough job market. Indeed, that same report found that unemployment among young college graduates remains stubbornly high at 7.2% for the year 2014.

In some parts of the country, however, the situation is not quite so dire for college graduates with student loan debt. In fact, SmartAsset’s analysis found that in some areas a person with the average loan debt burden may be able to pay off debt in less than 7 years.

To find the best cities to pay off student loan debt, SmartAsset looked at data from Credit Karma, a company that provides consumers with free credit scores, reports and monitoring, on the average student loan debt in America’s 100 largest cities. We also considered the median income for college graduates in these cities, which we ran through our income tax calculator to generate an after-tax income estimate for each area.

Lastly, we subtracted median housing costs to calculate disposable monthly income. Based on that number, SmartAsset calculated the number of years it would take the typical graduate to pay off average debt in each city. (Read our full methodology below.) 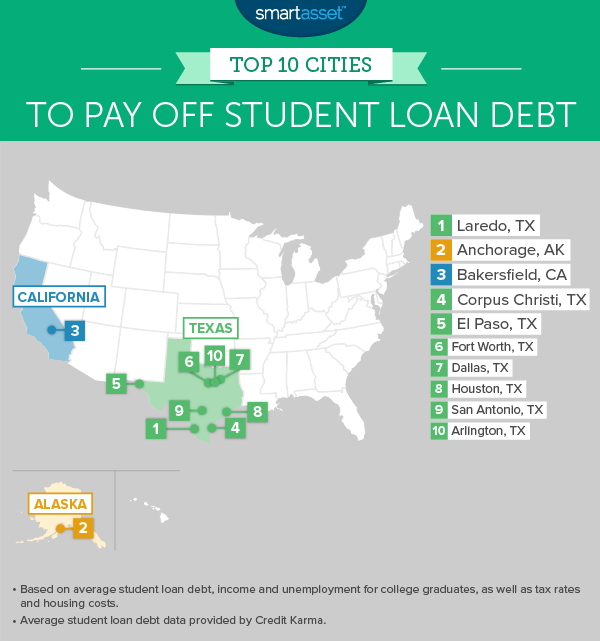 The average college graduate with student loan debt in Laredo owes $19,774, far below the national average. Additionally, college graduates in Laredo face low housing costs and low taxes. That means more money can be put toward paying off debt. In all, our analysis found that the typical graduate in Laredo could pay off debt in 7.4 years—about seven years and five months.

Alaska is known for its low taxes, but what makes Anchorage a top city for paying off student loan debt is the relatively high level of income earned by college graduates in the city. Workers with a college degree earn a median income of $61,037 in Anchorage. Among the 100 largest cities in the U.S., that is the sixth highest amount.

Our analysis found that the typical college graduate who has student loan debt in Bakersfield could pay off that debt in about 8.8 years. The average debt owed by graduates in Bakersfield is $24,414, below the national average.

One reason for that low debt load may be the relative affordability of California State Bakersfield, where the cost of annual tuition and fees is $6,792. According to the College Board, the national average is $9,410 among public four-year institutions.

Located on the Gulf Coast, south of San Antonio, Corpus Christi has a very low cost of living, which leaves college graduates with more money to pay down their student loan debt. Despite the generally high property taxes in the state of Texas, median annual housing costs paid by Corpus Christ residents are less than $11,000. That’s just 22% of the income earned by a typical college graduate in the city.

Median housing costs in El Paso are less than $800 per month, making it one of the most affordable big cities in the country. A college graduate earning the typical income for an El Paso resident with a bachelor’s degree could put $246 per month toward her student loan debt, paying it off in just over 10 years.

It is hard for a college graduate to pay off student debt without a job. For grads in Fort Worth, that shouldn’t be a problem. Among bachelor’s degree holders in the city, the unemployment rate is just 3.2%, which is near (or even below) the level economists consider to be full employment.

The Dallas area has experienced something of an economic boom in recent years. That means lots of job opportunities for college graduates. That type of growth can also lead to wage increases for workers across the city. The median income for bachelor’s degree holders in Dallas is $54,256, according to the U.S. Census Bureau.

Houston is the largest city in Texas and the fourth-largest in the country, but for college grads who need to pay off debt it rates well-ahead of places like New York, Los Angeles and Chicago. For starters, unlike residents of those cities, people who live in Houston do not have to pay any state or local income taxes.

Find out now: What is the true cost of living in Houston?

Additionally, housing in Houston is relatively affordable for such a large city. According to the U.S. Census Bureau, the typical Houston resident pays $10,920 annually in housing costs. That adds up to thousands of dollars in savings as compared with the country’s other largest cities.

The median income for workers with a bachelor’s degree in San Antonio is $47,328. After subtracting taxes and typical housing costs, someone earning that level of income in San Antonio would have $30,383 in disposable income. Dedicating 10% of that disposable income to student loan debt payments, it would be possible to pay off the average debt for graduates in the city in about 11.8 years.

Located between Dallas and Fort Worth, college graduates in Arlington have access to the region’s strong employment market. The unemployment rate in Arlington is currently less than 4%. Meanwhile, the typical income for residents with a bachelor’s degree was $50,045 as of 2014. 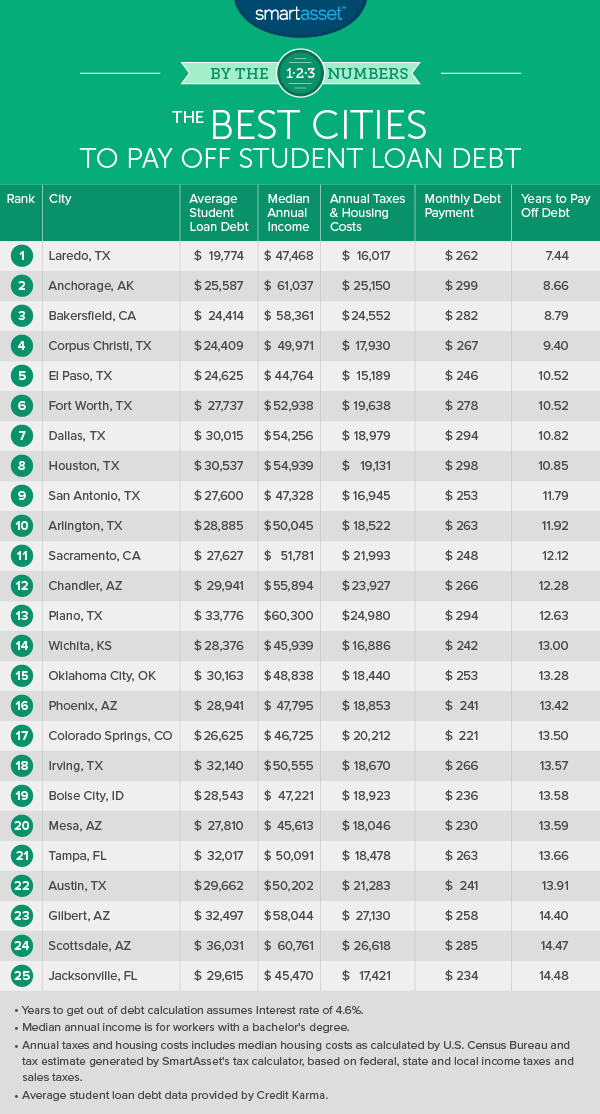 Next, we estimated the typical disposable income for graduates in each city. We ran U.S. Census Data on the median income among bachelor’s degree holders in each city through our income tax calculator, which incorporates state and local taxes, in addition to federal income taxes. That generated an expected after-tax income.

From that after-tax income we subtracted the median housing costs in each city, which includes things like mortgage payments, insurance costs, real estate taxes and utilities. (That data also comes from the U.S. Census Bureau.)

After subtracting taxes and housing costs from income, we assumed that graduates would dedicate 10% of their remaining income to student debt payments (the amount anyone would be able to earmark for debt varies but for this study we made this assumption for each of the cities). That leaves room for other expenses, like food or child care.

The last step was to calculate the length of time it would take to pay off debt at that rate of 10% of disposable income. To make this calculation, we used Credit Karma data on the average student loan debt owed by people with student loans in each city. We assumed an interest rate of 4.6%, which is the average rate across subsidized and unsubsidized federal student loans for undergraduates over the past five years.