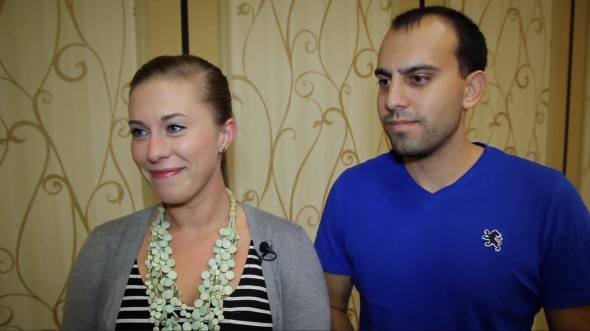 Mike and Lauren plan to retire early. Like super early. The couple, married since 2008, plan to have saved enough money to be financially independent by the time they are thirty. Sound crazy? They explain for us in this edition of SmartAsset Talks.

Mike and Lauren have always been savers. But after a 2 1/2 month backpacking trip around Europe gave them a glimpse of life outside the regular work routine, they wanted more. To get to that place of financial freedom faster, they ramped up their retirement savings to 75% of their income!

Lauren says anyone can save that much. In fact, Mike explains that they don’t make a fortune, just right about the median income for American families. But it’s enough to live on 25% of what they make and save the rest. The couple focuses on reducing costs on the three big ticket items that most people spend money on – house, car and food. That allows them to save at such an accelerated pace.

In order to be financially independent Mike and Lauren want to have accumulated enough assets that when invested, it produces enough income to cover their monthly expenses. They won’t necessarily stop working at that point but the couple plan to make money doing only what they love. Check out the above video to hear Mike and Lauren explain their early retirement plan and how they are getting there!

Thank you so much to Mike and Lauren for joining us at SmartAsset Talks! This is an ongoing vlog (video blog) series with some of your favorite bloggers and personal finance experts. Keep checking back here for interviews – once a week we post them right here on the SmartAsset blog.

AJ Smith, CEPF® AJ Smith is an award-winning journalist and personal finance expert with more than a decade of experience in television, radio, newspapers, magazines and online content. She has appeared on CNN, The Weather Channel, Wall Street Journal Radio and ABC News Radio. Her work has appeared on websites including MarketWatch, Huffington Post, Yahoo Finance and Credit.com. She is a contributor for Forbes. The SmartAsset VP of Content and Financial Education has degrees from Princeton University and Mississippi State University. AJ was named an honoree of the 2018 Women in Media awards in the Corporate Champions category. She is a member of the Society for Advancing Business Editing and Writing and a Certified Educator in Personal Finance® (CEPF®). AJ and her husband also write and illustrate educational children's books.
Related Posts
Read next article