Crazy for Clipping: The Downside of Extreme Couponing 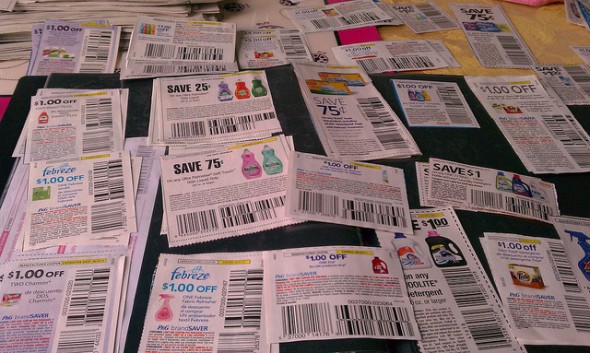 Who doesn’t love a bargain? Be honest, no matter how big or small the saving is, you love the feeling of sticking it to the man. Getting a good deal is a big deal no matter how small that deal is. That’s a lot to deal with I know but it does bring us face to face with an uncomfortable truth: sometimes we buy things we don’t need because the price is right.  Couponing can have a downside.

Couponing and bargain hunting in general remind me the time a friend of mine took me to his garage and pointed to what can only be described as a contraption of some sort. It had dials and gauges and wheels to make it easy to move around. He pointed to it with pride and said, “Well what do you think?” I circled it and examined it, trying to figure out what it was when I couldn’t I asked, “What is it?” His smile got even bigger and his chest puffed out even more and he said, “I have no idea but it was half price!”

Finding coupons can lead you to buy stuff you don’t need at a discount. Extreme couponing only makes matters worse by making you buy even larger quantities of stuff you don’t need so you can get it for even less. The cycles of bargain buying perpetuates itself like any other addiction, by making us feel good about our successes but are they really successes if we have no need for the stuff we’re buying?

My grandmother used to say everything in moderation. She would not approve of extreme couponing’s logic that if a 10 pack of paper towels at four cents on the dollar is a good deal than ten 10 packs at that same rate is a great deal. Now throw in toothpaste and canned tomatoes and macaroni and dog food (even if you don’t own a dog, a deal is a deal). The list of items goes on and on and pretty soon you’re up to your elbows in stuff.

With the exception of the dog food for your non-existent dog, you will eventually use all your goodies right? Sure you will but in the meantime it takes up space. Since most of us don’t have the ability to build additions to our homes every time we go shopping to accommodate the latest multi-year supply of macaroni and cheese, it often ends up intruding on what limited space we do have. Buying in bulk because it was a great deal can quickly create a storage problem that affects our quality of life.

Getting one hundred rolls of paper towels at a steep discount like 2 for the price of one sounds great. But if every time you dry your hands, you use twice as many because they were so cheap, it’s as if you paid full price for half as many paper towels. Using more of something just because it was cheap can work to eliminate or at least diminish the savings.

Paper towels are such an easy example because most of tend to overuse them but the principle carries through to other things as well. Not squeezing out the last of the toothpaste, using more laundry detergent than is needed because you know it cheap. Opening a large can of tomatoes when a small can is all you need but you only have large cans because that’s the only coupon you had.

It is easy not to think about the final cost of products and just consider the purchase price. Unfortunately we don’t live in a math free world and because we don’t we should be aware that using 2 or 3 times the amount of something that was 70 percent off means the bargain that once was is no more.

The Other Waist Race

Time is money and extreme couponing takes lots of time. If you value your time at just $15 per hour and you spend 4 hours a week clipping coupons to save $100 you’ve really only saved $40 because you invested $60 of your time. This equation of course does not include the added time of going to multiple stores to cash in your coupon savings.

Factoring in things like waste, remember toothpaste, tomatoes and paper towels, and even more of your coupon savings vanish. I’m not even going to try and calculate the added cost to your health that comes from the extra pounds that are a direct result of coupon addiction. Coupons are not a bad thing if you listen to my grandmother and do them in moderation.