Cities Where Renters Can Afford to Live Alone 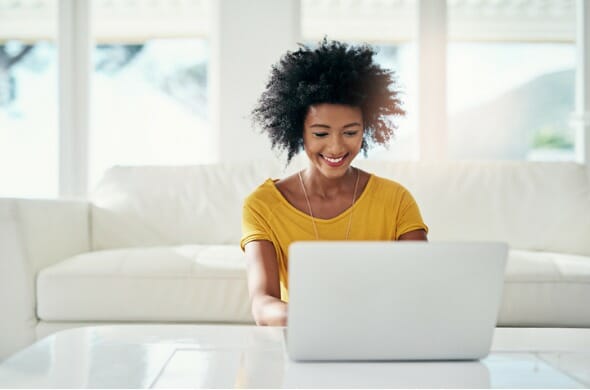 Many renters don’t enjoy living with roommates, but in order to live alone you need to find an affordable home. This can be challenging, especially with rents on the rise across the country. However, there are some cities where living alone is within reach for a large number of workers. Below we look at these and other factors to rank the cities where you can afford to live alone.

In order to rank the most affordable cities for renters to live alone, we looked at data on five metrics. We looked at median rents, the number of studio and one-bedroom apartments as a percent of all homes, median earnings for full-time workers, overall cost of living and unemployment rate. 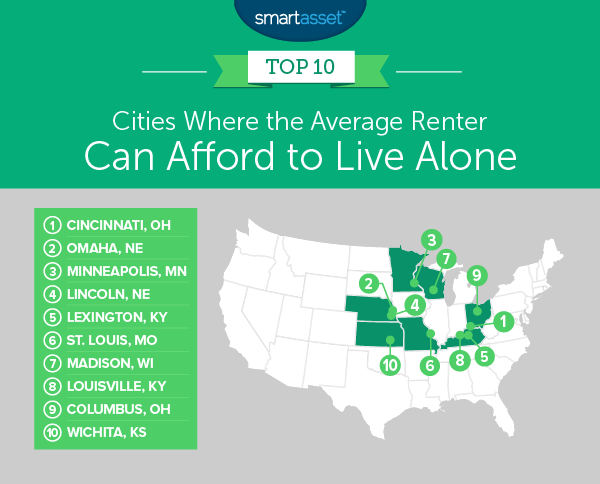 When it comes to affordably living alone, no cities scores better than Cincinnati. The average person living in a studio or one-bedroom apartment in this city pays only $575 on rent and the overall cost of living is over 3% less than the national average. With those low rents and costs of living, renters here can get started on saving to make the switch from renting to buying.

What puts Omaha in second is its economic climate. Jobs are relatively plentiful here. In total only 3.2% of workers in Omaha are out of work, a score beaten by only 14 other cities in this study.

If you want to rent an apartment to live alone, it’s important that you can find one. In Minneapolis over 34% of all homes are studios or have one bedroom, meaning there is no shortage of realistic option for renting alone.

When it comes to price Minneapolis is on the pricey side, however. According to data from the Census Bureau, the average studio or one-bedroom apartment costs nearly $800 per month. Fortunately those high costs are somewhat balanced by high local earnings. The average full-time worker in Minneapolis earns nearly $49,000 per year.

Nebraska’s capital comes in fourth. This is one of the most affordable cities in our study. According to our data the average person renting a studio or one-bedroom pays an average of just under $600 per month. At the same time the overall cost of living is a few percent below the national average.

With those two statistics in mind, it makes sense that Lincoln is one of the most affordable places to live alone. In fact with the cost of living so low it may be a great place for a single person to buy a home.

Lexington scores well thanks to affordability and access to economic opportunity. This city ranks 14th in rent, with the average studio or one-bedroom apartment costing $608 per month. In terms of cost of living, this city costs about as much as the national average, which is great for a relatively large city. Jobs are readily available too.

The biggest hurdle to living alone in Lexington? Supply of studios and one-bedroom apartments. According to our data, less than 14% of housing units in this city are studios or one-bedrooms.

The city is hurt in this ranking by high unemployment levels and low earnings. In each of those metrics, St. Louis ranks below average.

St. Louis residents who want help managing their money, including rent, should check out SmartAsset’s top financial advisors in the city.

Residents in Madison have access to some promising economic prospects. This city has an unemployment rate of 2.2%, second-lowest in our study, and the highest median earnings for full-time workers in our top 10. With high incomes and great job prospects, renters in Madison can afford to splurge on living alone.

However the costs of living stop Madison from climbing any higher on the list. The city has the highest rent costs in our top 10 and the overall cost of living is 10% higher than the national average.

Another Kentucky city comes in eighth, this time its Louisville. Louisville scores well thanks to affordable rents and low costs of living. The average person in a studio or one-bedroom apartment in this city pays less than $600 per month. And the cost of living is similar to the national average.

The biggest concern for someone trying to live alone in this city might be finding a suitable apartment. According to our data, less than 16% of the housing stock in this city are studios or one-bedroom apartments.

In ninth is Columbus, Ohio. This is a college town with low costs of living. Overall this city ranks 11th out of all the cities we analyzed for cost of living. Renting a home alone is also pretty affordable. This city ranks 26th for median rental costs.

Where residents may struggle is earnings and finding an apartment. In both of those metrics, Columbus ranks around average.

Our list ends in one of the most affordable cities in our study. The average person living in a one-bedroom apartment or a studio in Kansas pays just over $550 per month. That means in order to afford living alone comfortably the average worker would need to earn about $1,650 per month. The good news for residents here is that average pay for outpaces that number. The average full-time worker earns about $3,440 per month. 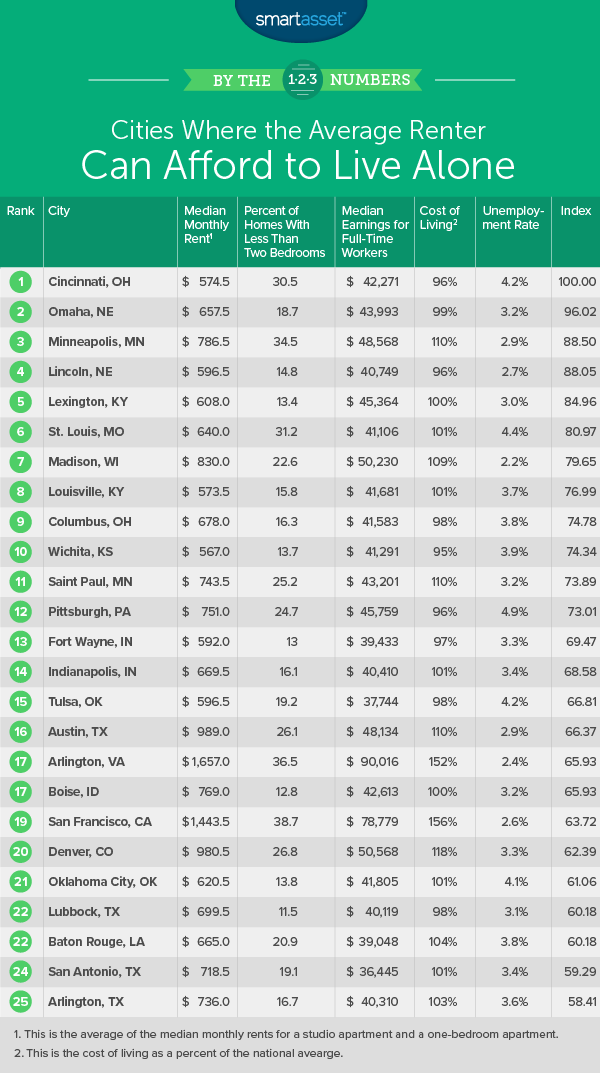 In order to rank the most affordable places to live alone, we looked at data on 100 cities. Specifically we compared them across the following five categories:

Tips for Moving From Renting to Buying