The Top Ten Most Dangerous Cities in the Country 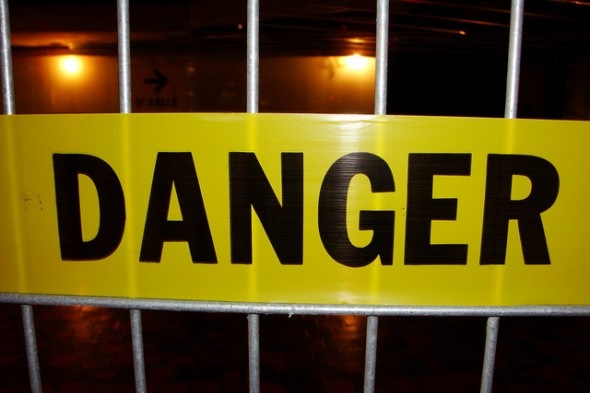 A feeling of safety where we live and work is an essential part of quality of life. After all, it’s hard to enjoy our situation when we’re constantly worrying whether we’ll come to harm. So where is safety hardest to find – which of America’s major cities is most dangerous? SmartAsset wanted to find out.

If you live in a city, other than disease, there are three primary ways you can come to harm: Getting in an automobile accident, being subject to violence or having an accident at work. For 107 major cities, we took data on frequency of car crashes, courtesy of AllState, the crime rate, as reported by the FBI and the number of workplace fatalities per capita, from the Bureau of Labor Statistics. We weighted car accidents most heavily, since this is the most common danger of the three, followed by violent crime, followed by property crime and workplace fatalities weighted equally.

The Top Ten Most Dangerous Cities 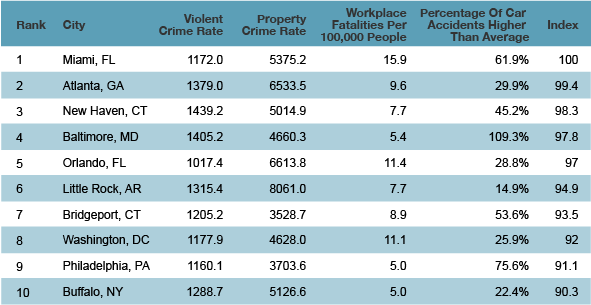 The sunny port of Miami is a center for trade of all kinds – including the ones in illicit drugs, which is part of why it has the nineteenth-highest violent crime rate in the country. At 15.93 deaths in the workplace per 100,000 people, it also has the highest workplace accident rate in the country, as well as the fourth-most car accidents per capita.

“Hotlanta” can get pretty dangerous – it has the ninth-highest rate of violent crime in the country, as well as ranking tenth for both property crimes and workplace accidents.

New Haven is a major college town, most notably for the presence of Ivy League institution Yale University, among others. Usually this indicates safety, but New Haven nevertheless has the sixth-highest amount of violent crime among cities surveyed, along with the eighth-highest rate of traffic accidents, with a 45.2 percent higher accident risk than the national average.

By far the worst drivers in the country seem to come from Baltimore – Charm City’s car accident rate is a full 109.3 percent higher than the national average. It also ranks seventh-highest in the nation for violent crime.

Orlando is a tourist town, so all those visitors (who may be less aware of their surroundings than locals are, and who are flush with money) make it one of the places with the highest risk for property crime in the country – ranked eighth. It also has the fifth-highest level of workplace fatalities in the country.

Is It Better to Buy or Rent?

The Arkansas capital has a high property crime rate, ranked third in the country, as well as the eleventh-highest rate of violent crime on the list.

Birthplace of the Frisbee and home to legendary huckster P.T. Barnum, Bridgeport is one of the more accident-prone cities in the country, with the fifth-highest rate of automobile accidents and the thirteenth-highest rate of workplace casualties on the list.

Our nation’s capital is notorious for its confusingly-designed thoroughfares; the Beltway is a hard road for outsiders (and even locals) to get around. This may be why Washington has the twentieth-most car accidents on the list – you’re 25.9 percent more likely to get in a car accident there than average. There are also 11.07 workplace fatalities per 100,000 people, the seventh-highest in the country.

Philly has a reputation as a tough town – it’s famous for Rocky and sports fans who once assaulted Santa Claus – but its violent crime rate is not especially high, at twenty-first in the nation. However, its drivers are rather dangerous, with the third-highest rate of car accidents on the list – 75.6 percent higher than the national average.

The famously erratic and dangerous weather of Buffalo may have something to do with its rate of car accidents that’s 22.4 percent higher than average – ranked twenty-sixth – but it’s also ranked thirteenth for violent crime.