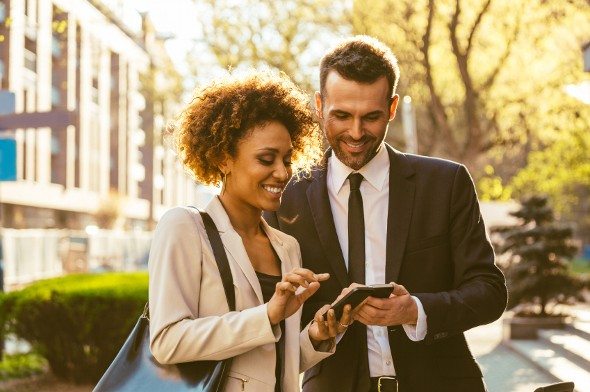 In real estate it’s all about location, which is why some cities are more profitable and have higher salaries for real estate agents than others. For the 2016 edition of our annual study we crunched the numbers to find the ten best cities to be a real estate agent.

This is the 2016 edition of our annual study on the top ten cities to be a real estate agent. To see the 2015 rankings, head here. 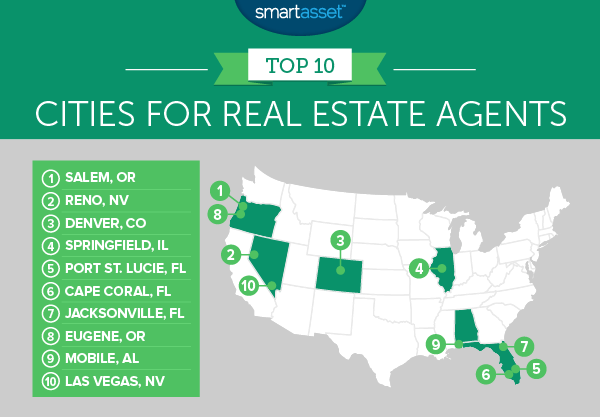 Salem, Oregon moved up from the #4 spot in last year’s study to claim the #1 spot on the 2016 list of the ten best places to be a real estate agent. Between the fourth quarters of 2014 and 2015, real estate prices in Salem jumped 17.5%. That, combined with the high number of sales per agent, helped Salem claim the top spot. High prices mean real estate agents get paid more, and it’s also a sign of a competitive market.

Related Article: The Cost of Living in Oregon

Last year’s #1 was Reno, which this year came in a close second to Salem. Though the median annual real estate agent salary in Reno is higher than in Salem ($67,420 vs. $41,100), Reno home prices “only” rose 9.91% between the end of 2014 and the end of 2015. That’s still a high rate of growth. Northern Nevada has one of the fastest rates of economic growth in the nation, which has led to an influx of new residents, all searching for housing. The numbers show we can probably expect prices to continue to climb unless new housing inventory can be added in time to keep up with the region’s growth.

Springfield hasn’t seen the same double-digit growth percent change in real estate prices that some of the other cities on our list have enjoyed. Still, the city boasts a high number of sales per agent and a median annual real estate agent salary of $55,800. Springfield is new to the top ten this year, replacing its neighbor to the north, Peoria, as the only Illinois city on our list.

The first Florida city on our list is Port St. Lucie, which came in 6th in last year’s study and claims the #5 spot this year. Prices in Port St. Lucie rose 15.74% between the fourth quarters of 2014 and 2015. One factor that could be contributing to the rising prices? Retirees are flocking to Port St. Lucie. It’s #7 on our list of the cities where retirees are moving. The population of Port St. Lucie has doubled in the last 15 years.

Though the median annual salary for real estate agents in Jacksonville is a modest $29,220, the city saw a stunning 25.2% increase in prices between 2014 and 2015. That’s the biggest percent price change of any of the cities in our top ten. Jacksonville is also one of the best cities for boat owners.

The second Oregon city on our list is Eugene, home to the University of Oregon. The median annual real estate agent salary in Eugene is $64,800. Sales per agent and turnover are both fairly high, but prices are holding steady. Eugene real estate prices rose just 3.29% between 2014 and 2015.

Mobile, Alabama has enjoyed a bit of a renaissance in recent years, spurred in part by the opening of an Airbus U.S. Manufacturing Facility (which recently delivered its first A321 to American Airlines). The city’s real estate agents have benefited from the economic upswing. Prices in Mobile rose 11.5% between 2014 and 2015, and the median annual real estate agent salary is $60,180.

Las Vegas is famous for many things, including its relatively affordable housing. However, prices in Sin City rose 9% between the end of 2014 and the end of 2015. That’s good news for the city’s real estate agents, who earn a median annual salary of $56,260. It’s also a sign that Las Vegas, which was hit hard by the foreclosure crisis, may be rebounding. 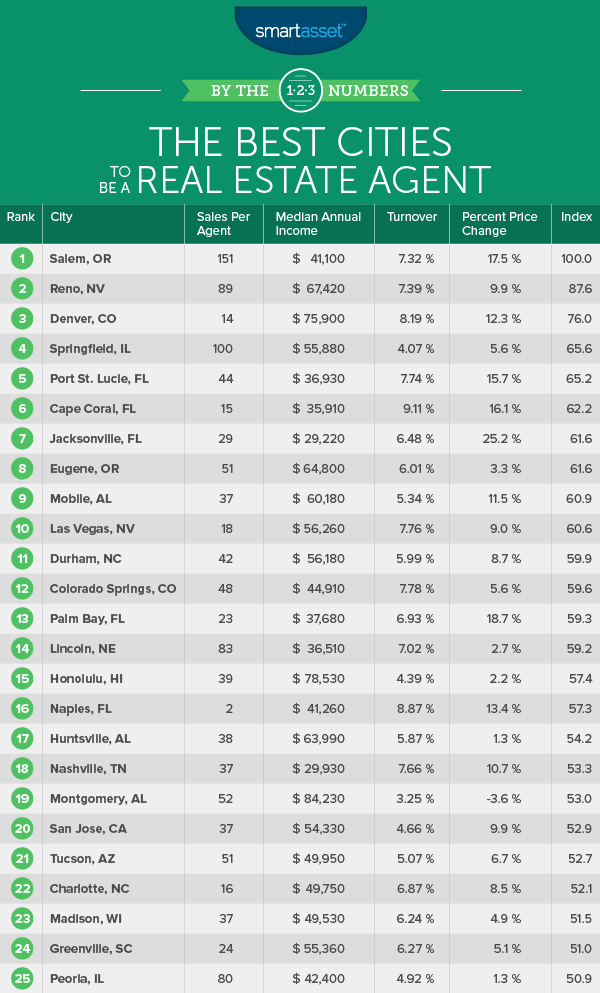 To find the best cities for real estate agents, SmartAsset pulled data from several sources. Our turnover data came from Zillow, which tracks the percentage of homes sold in U.S. cities. We used the turnover data for January 2016.

The data for the percent change of home prices between the fourth quarters of 2014 and 2015 came from the National Association of Realtors.