The Most Transient Cities in America 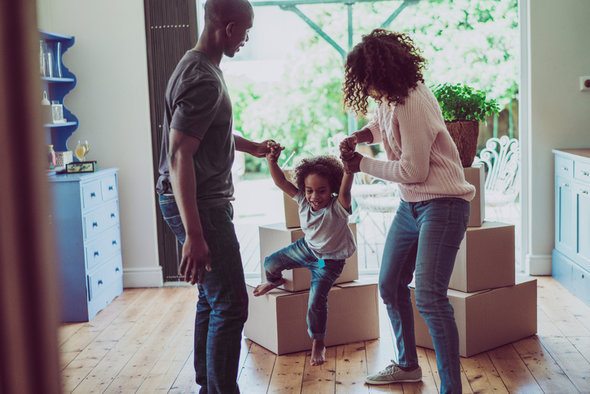 Americans don’t move as much as they used to. According to Census Bureau data, Americans in 1948 moved almost twice as often as Americans in 2016. In fact, the current rates at which Americans move around the country is at the lowest point in recorded history. Recent research from Yale University has shown declining mobility hurts the country’s ability to grow. In particular researchers point to the declining mobility out of areas with high unemployment rates and low incomes.

Moving to a new city? Should you be renting or buying?

Some economists argue home affordability issues is one reason for this. But some cities are still a buzzing hive of activity, with large portions of its residents moving in or out in any given year. Below we rank the most transient cities in America. For this study, we analyzed the number of residents who moved in or out of a city and compared it to the city’s overall population. Check out our data and methodology below to see where we got our data and how we put it together. 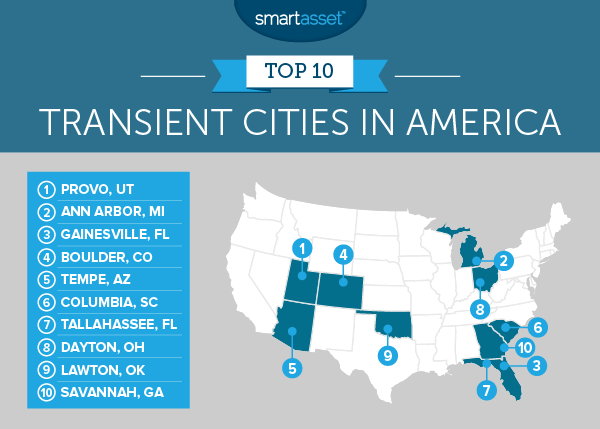 In 2015 just about 65% of the residents in Provo made a move of some kind, whether into the city or out of it. The city saw an overall gain of residents – about 4,000 more people moved into the city than left it. The city also saw a net gain of 1,733 millennials. Neither of these facts are too surprising. Provo is home to Brigham Young University, so year after year a large number of students and faculty move in and out of the city.

Census Bureau data shows that renters are much more mobile than homeowners. People who invest in a home are more likely to stay there for a longer period than someone who is renting. Provo is one of the most affordable cities for renting, which may contribute to its transience.

Ann Arbor has a total population of 115,828 meaning about 63% of the population moved. For people looking to move here, be aware that Michigan property taxes are some of the highest in the nation.

Gainesville is a relatively large city located in central Florida. This city saw around 80,000 people move in or out in 2015, or about 62% of the total population. Like Provo and Ann Arbor ranked above it, Gainesville is a college town, home to the University of Florida.

But data shows that it’s more than just students moving to Gainesville. The city is the 83rd-most popular landing spot for retirees.

Boulder is a hub of activity, much of it positive. This city is home to one of the most stable housing markets. It’s seen median home prices grow over 300% since 1992 with no years of significant losses. Unfortunately, this has also made the cost of living relatively high in Boulder and may be making buying a home unaffordable for some.

Overall about 65,000 people moved in or out of Boulder in 2015. That figure accounts for about 61% of the total population, the fourth-most in our study.

Tempe is an economic powerhouse, especially for students. This city is home to Arizona State University. In the past we have ranked Tempe as one of the best cities for working students. Perhaps that goes some way to explaining why there’s so much movement in and out of Tempe.

Columbia is the sixth-most transient city in the country, according to our data. The University of South Carolina is located here, which may be one reason so many people are moving in or out. The city is also located next to Fort Jackson, the Army’s largest initial entry training center.

Overall about 80,000 people moved in or out of Columbia which equaled around 60% of the overall population. Columbia also seems to be a popular place to end up. About 7,300 more people moved into the Capital of Southern Hospitality than left.

Florida State University is located in Tallahassee. While there are other schools in Tallahassee, like Florida A&M, the student population of Florida State alone makes up over 20% of the city’s population. That means the year-to-year flux of students has a big impact on the city.

Around 81,595 people moved in or out of Dayton in 2015. That is the fourth-most movement in terms of raw numbers in our top 10. But due to Dayton’s relatively large population of 138,000, 81,595 only represents around 58% of the population. This was good enough for eighth place.

Dayton saw more people coming in than leaving. About 3,600 more people immigrated to Dayton than emigrated. The Wright-Patterson Air Force Base is located just east of this Ohio city.

Overall Lawton, Oklahoma had the lowest number of total movers in our top 10. Just under 55,000 people moved in or out of Lawton. In 2015, 30,429 people immigrated to Lawton while 24,555 emigrated from the city. But because Lawton has a relatively small population, that 55,000 makes up a significant figure. Just over 58.1% of Lawton’s population moved in or out in 2015.

There is a major military institution, the Fort Sill Military Reservation, in the nearby area, perhaps explaining some of the reason why there is so much movement around Lawton.

This city located in eastern Georgia is the oldest city in the Peach State. In total, around 82,000 people immigrated to or emigrated from Savannah. That figure means around 57% of the population were migrating in 2015.

One positive takeaway is that moving into the city was slightly more popular than leaving, with around 5,500 more people coming to Savannah than leaving it. 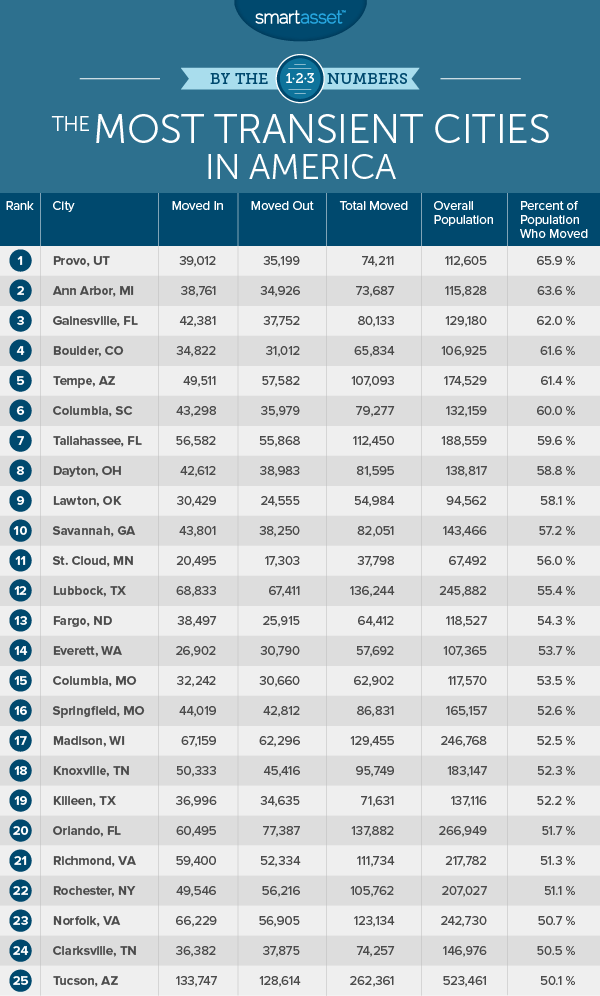 Tips for Saving on a Move

If you are planning a big move, the costs can be higher than you expect. For this reason, making a moving budget can be a good idea. Paying for moving equipment or hiring professional movers can get expensive. Plus, there are other small costs that come with moving, like cable installation fees at your new home.

A tip for movers who are looking for professional moving help is to shop around. There are usually plenty of different moving companies. Ask friends or relatives (or social media!) for recommendations for the best affordable moving companies.

Did you know that your move could qualify you for a tax break? Before you get too excited, there are restrictions attached to this. To begin with, your move must be related to a new job to qualify. There is typically a one-year deadline from when you started the job and when you moved for it to qualify, but there are exceptions to this rule. There are also rules around the distance you’re commuting and the hours you’re working. However if you do qualify, you may be able to deduct travel expenses related to your move. These include things like airfare, hotel stays, rental costs and gas. Shipping and storage costs are also deductible.