The Most Entrepreneurial Small and Mid-Size Metros 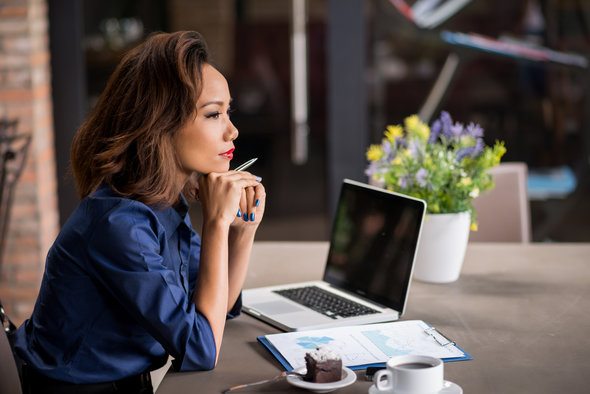 Of all American values, entrepreneurship is one of the most revered. Many Americans dream of the day they can take out a loan, build their own business and make it on their own. Big metro areas like San Francisco and New York get most of the attention when it comes to entrepreneurship but there are plenty of smaller metros where people are also living the American dream. We were curious about them. Read on for SmartAsset’s look at which small and mid-size metro areas in America are the most entrepreneurial.

In order to determine the most entrepreneurial small and mid-size places in America, we considered factors like the percentages of new and small businesses in a metro area, the percentage of workers who work for new businesses, the number of small business loans per 10,000 residents and the area’s unemployment rate.

To get a better understanding of how we put all these numbers together to create the final ranking, read the data and methodology section below. 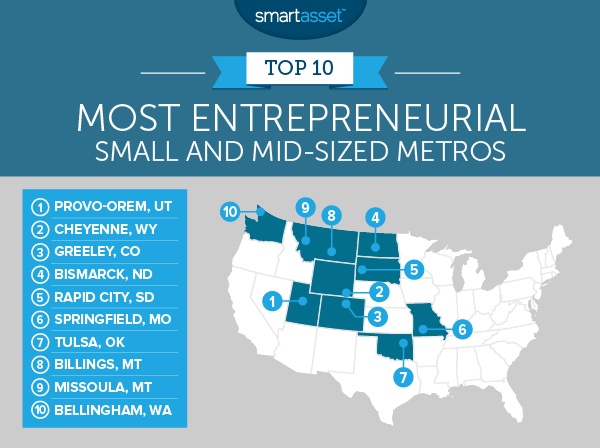 Provo-Orem claimed the top spot in our ranking of the most entrepreneurial small and mid-size places. More than 18% of businesses in Provo-Orem were launched between 2012 and 2014 and 6.79% of employees work for a new business. It ranks first for both of those metrics. Plus, a whopping 76.2% of businesses in the area are classified as a small business (meaning there are less than 10 persons employed by the business).

Cheyenne, a metro area that’s home to 97,121 people and encompasses the capital of Wyoming, comes in a close second in our study. Our data shows that Cheyenne is a hub of small businesses. About 76% of businesses in Cheyenne have less than 10 workers, which is the sixth-highest rate in the study. And the area’s 5.1% unemployment rate is lower than that in our first place city, Provo-Orem.

Related Article: The Best States for Homeowners in 2016

Business in Bismarck, North Dakota is booming. It has the lowest unemployment rate in our study (3.3%). And about 71% of the businesses in Bismarck can be considered small. Bismarck citizenry also seem eager to start new small businesses. Over the past year, Bismarck residents had a small business loan rate of six per 10,000 residents, that’s the second-highest in our top 10.

Tulsa is the lone representative of the Sooner state in our top 10. With a population of 980,794, Tulsa is also the biggest metro area in our top 10. Unlike some areas which have some very good scores and some low scores, Tulsa cracks the top 10 due to consistency. It has solid scores across all factors, without any one metric standing out in particular. Tulsa’s best scores were in percentage of new businesses and percentage of all employees who work in new businesses, for which it ranked 19th and 25th respectively.

Two metro areas in Montana appear in our top 10. The first is Billings, which has a population of 169,329. Billings ranks fourth overall for its 4.5% unemployment rate. It also ranks third in our study for its rate of small business loans. Over the past year, there were more than seven small business loans per 10,000 residents – that’s the highest in our top 10. Billings isn’t ranked higher in our study because it has a relatively low percentage of new businesses (11.2%). 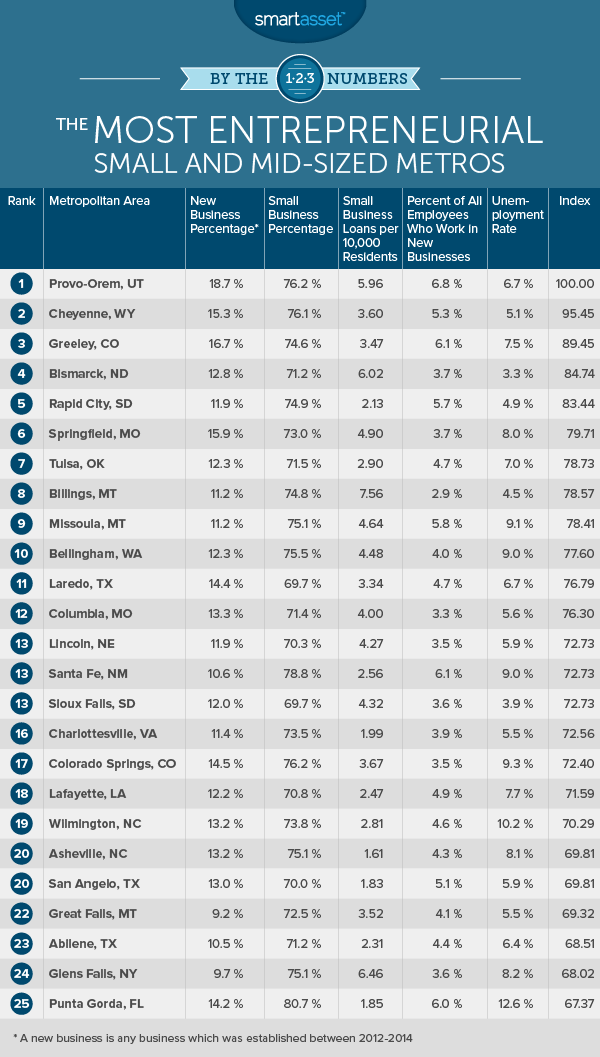 As previously mentioned, we considered small to mid-size metro areas as those with less than 1 million residents. We did not have complete data sets for some metro areas which fall under this classification. These areas are not included in our final ranking.

In order to rank the most entrepreneurial small and mid-size metro areas in the U.S., we looked at the following five metrics for 151 metro areas: