The Best Cities for Pizza Lovers

Among all the beloved foods in America, pizza seems to be one of the most hotly debated. Due to its simplicity and loosely defined parameters (dough, cheese, sometimes sauce), just about everyone has a favorite kind of pizza. Pizza topics like depth (thin vs deep dish), shape (square vs triangle) and even frozen preparation methods (microwave vs oven) are all passionately debated. But the most famous debate seems to be geographic. People across America swear by New York slices or Chicago deep dishes. But are either of these really the best places for American pizza lovers?
Find out now: Is it better to rent or buy?

Imagine you are a pizza lover. And by pizza lover I mean you really love pizza. In fact, as a pizza lover there is nothing more important to you than getting as much good pizza as you can, as often as possible, for as little as possible. Would you want to be in New York or Chicago?

In order to determine the best cities for pizza lovers Smart Asset looked at those factors which would matter most to a true pizza-lover. Availability of pizza, how good the average pizza was, the percentage of pizza which was outstanding and how much it would cost said pizza lover to live in that city (aka how much money will you have left over after covering basic expenses to buy pizza). After all true pizza-lovers want to maximize their pizza dollars. To find out how SmartAsset compiled the numbers please read the full methodology below.

No Chicago or New York. If one listens closely one can hear the dim roar of 11 million anguished souls roaring out in anger over being passed over in this study. To put it bluntly, there are too many other options in New York and Chicago for them to be great for people who are true pizza lovers. This is not necessarily a bad thing. It’s just tough to compare New York (11.9) and Chicago (13.5) to cities like Carlsbad, CA (111.7) in terms of pizzerias per resident.

College towns do well. Perhaps it is unsurprising that if you want to eat a lot of cheap pizza you should go to college towns. It turns out that a lot of the college town pizzerias are also pretty good. South Bend, IN and Springfield, MO had the 9th and 7th highest percentages of great pizza places. Perhaps it could be argued that people in New York (scored last in that category) are tougher graders than people in South Bend. 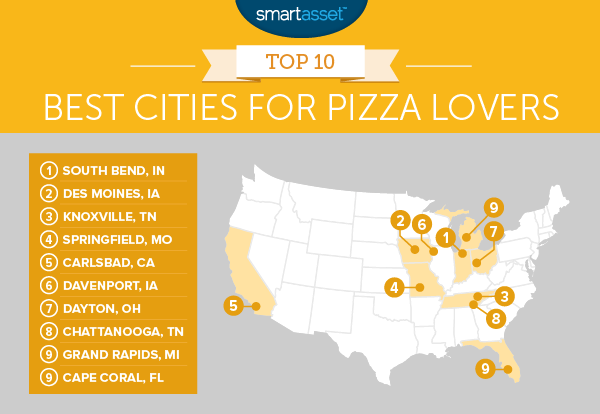 As mentioned above, college towns did well in our study and South Bend is indeed a college town. The University of Notre Dame is in fact the largest employer in the city, employing over 5,000 people. While that probably isn’t a surprise, it may be more surprising to find it at the top of a study looking at best cities for pizza lovers. South Bend has good scores in every category we looked at with the percentage of great pizza spots being the stand out statistic.

Probably more known for being the first site in the presidential primary races, it turns out Des Moines is also a great place for pizza lovers. Des Moines offers pizza lovers a lot of extra pizza dollars because of its low cost of living (91) as well as a lot of good pizza (according to Yelp reviewers). Des Moines ranks 12th in highest average pizza rating at 3.6. For the pizza lovers looking to have a little fun, Des Moines can offer up “Fong’s” part Asian fusion pizza part Tiki-bar.

Another college town, Knoxville, Tennessee is the home of the University of Tennessee. Judging by the numbers, it’s also a great place for pizza. Knoxville has above average scores in all the categories we analyzed. Knoxville can offer pizza lovers the 16th highest percentage of great pizza and the 14th lowest cost of living. That should get pizza lovers in New York looking longingly at their wallets.

One of the cities with the highest variance in scores, Springfield scores in the top 10 in three categories – average rating of pizza, percentage of great pizza and cost of living. But the city ranks 97th in pizza places per capita. Indeed, as one of the cheapest places to live Springfield should give residents some extra money to binge on pizza.

Although Carlsbad is more famous for its open spaces and flower beds, it also has something to offer pizza lovers. It should not be too hard to stumble upon a pizza place in Carlsbad. The city has the 5th highest score in pizza places per 10,000 residents at 111. Carlsbad also has the 9th highest average rating for pizza places.

The second Iowa city to make our list, Davenport is in fact the superior of the two in terms of pizza quality (10th and 8th compared to Des Moines ranking of 12th and 14th for average pizza rating and percentage of great pizza). Davenport falls behind its Iowa rival because of the city’s higher cost of living. Fortunately for pizza lovers stressed about their pizza dollars, Davenport is home to the Palmer College of Chiropractic which is where the first ever chiropractic adjustment took place. It’s probably a good place to get stress-related back issues looked at.

A similar story to other cities on the list, pretty good pizza mixed with low cost of living make Dayton a top ten city for pizza lovers. Unfortunately for the pizza tourists, Dayton only has 10 pizza places per 10,000 residents (only good enough to score 74th for that metric) so it may take a while to find one without the inside scoop (or, um, slice).

Chattanooga ranks first in most fun cities to pronounce (probably!) but only 8th in best cities for pizza lovers. It ranks 23rd in both average pizza ranking and cost of living at 3.56 and 91 respectively. Sadly, there are not enough pizza places per capita to get Chattanooga any higher on our list. The city has only 7.7 pizza places per 10,000 residents.

Perhaps the antithesis to Grand Rapids, Cape Coral comes with much milder winters and a lot more pizza places. Cape Coral has around 50 pizza places per 10,000 residents. That’s good enough for 8th on our list in that metric. And while the pizza isn’t as good as other cities in our top 10 list (based on Yelp reviewers), Cape Coral still has a pretty good average of 3.5. That puts it at 44th on our list for that metric. 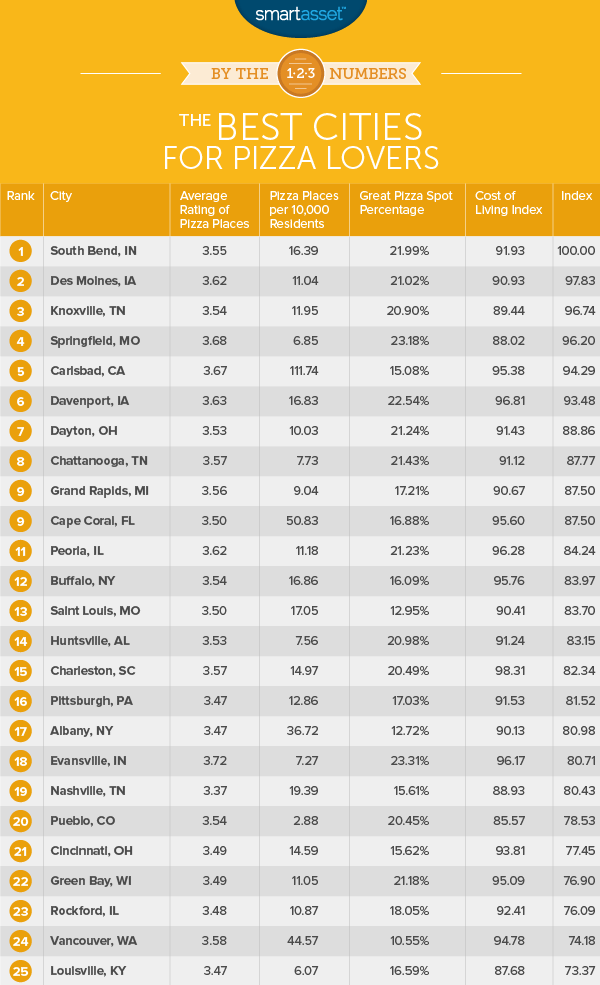 To conduct our study and find the best cities for pizza lovers, SmartAsset looked at data on four different factors for 137 cities:

Average rating of pizza places. This is the average score of all pizza places on Yelp for that city.

Pizza places per 10,000 residents. We calculated this number using the U.S. Census Bureau data for population and Yelp data for number of pizza places.

Cost of living. This is the cost of living for each city taken from the Census Bureau. 100 is the national average.

We ranked each city according to those four metrics. We then averaged those rankings, giving equal weight to each factor. We calculated an overall index score based on those averages. The city with the best overall averaged received a 100 and the city with the worst average received a 0.