The Best Cities for Healthcare Workers 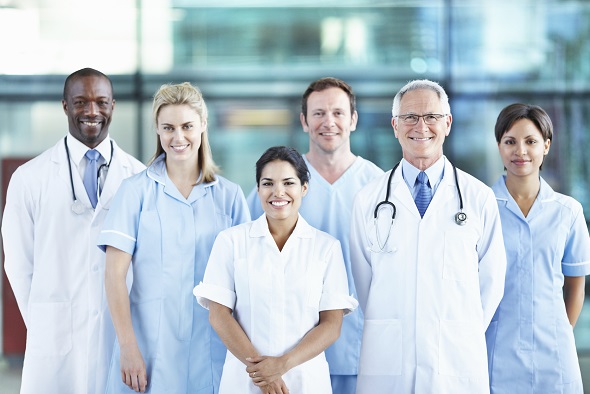 The healthcare industry is one of the fastest growing in the U.S., adding over 360,000 jobs between March 2014 and March 2015. That’s about 30,000 per month. As demand for healthcare professionals continues to grow, more workers are pursuing degrees in fields such as nursing, radiology and anesthesiology. Jobs in these fields usually pay well and, depending on where you work, can include great benefits like an employer-matched 401(k) account and, yes, health insurance. So where are healthcare workers doing the best?

To answer that question, SmartAsset look at data from the Bureau of Labor Statistics (BLS), the U.S. Census Bureau and Indeed.com on healthcare employment and pay in each of America’s metro areas. In particular, we considered the following five metrics:

For each of these five metrics, SmartAsset ranked every one of the 379 major metro areas in the U.S. We then averaged those five rankings, giving half-weight to the last two metrics listed above, and assigned a 0-100 score based on each city’s average. The city with the lowest average ranking scored a perfect 100, while the city with the highest average ranking scored a zero. 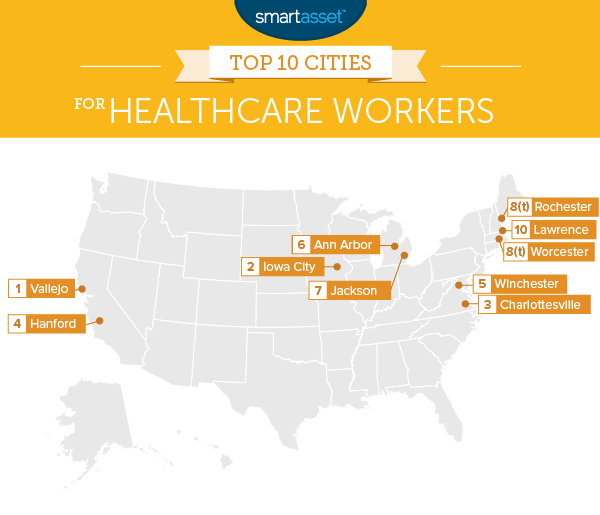 Located at the north end of the San Francisco Bay Area, Vallejo is a relatively small city (the population is around 120,000), but healthcare plays a huge role in the local economy. The city’s largest employer is the Kaiser Permanente Medical Center, which employs 3,906 people in Vallejo according to the City of Vallejo’s 2014 financial report.

That facility first opened in 2010 and has been adding jobs ever since. As of April 2015, indeed.com listed 6,932 healthcare openings in Vallejo, more than significantly larger cities like Denver and Baltimore.

As home to the University of Iowa Hospitals and Clinics (UIHC), Iowa City is an established center for the healthcare sector. UIHC employs more than 8,000 people including 1,617 physicians, residents and fellows. It is frequently selected as one of the best employers to work for in healthcare.

Along with UIHC, Iowa City boasts several other hospitals, including Mercy Hospital and the Iowa City VA Medical Center. SmartAsset’s analysis found that the average income for healthcare workers in Iowa City grew by a whopping 33% between 2010 and 2013, an annual growth rate of about 10%.

According to the city of Charlottesville’s annual financial report, the city’s largest employer is the University of Virginia Medical Center. The Martha Jefferson Hospital has historically also been among the largest employers in the city. Those two institutions, in addition to the UVA medical school (which has over 1,000 faculty teaching various types of medicine) make Charlottesville a great city for healthcare workers.

Hanford rated ninth in SmartAsset’s analysis for healthcare worker pay after housing costs, behind several major California cities including San Jose and Sacramento. On average, healthcare workers in Hanford earn $72,832 per year, which leaves them with around $60,000 after accounting for the cost of housing in the city.

According to the Bureau of Labor Statistics, there are about 53,000 people employed in the Winchester metro area. Of those, nearly 6,000 (more than 11% of the workforce) work in healthcare. The largest area healthcare employer is Valley Health, which operates the Winchester Medical Center, and employs 5,300 people in the region.

Ann Arbor is home to one of the premier universities in the country, which boasts one of the best hospitals in the world. U.S. News & World Report ranks the University of Michigan Health System (UMHS) among the top facilities nationally (out of more than 5,000 hospitals) for eight different adult specialties and ten pediatric specialties, including cancer, cardiology and diabetes.

That kind of quality is likely a draw to any healthcare professional, but UMHS also rates highly for sheer size. It boasts an operating budget of over $3.3 billion, including $466 million for research alone.

The healthcare industry in Jackson is driven by Allegiance Health, a 480-bed health system that is based in Jackson. Allegiance Health employs more than 4,100 people, including 400 physicians. It is currently working to combine with the University of Michigan Health System, which would likely only bolster the strong growth the region’s healthcare sector has experienced in recent years. Income growth and job growth in healthcare were 23% and 14% respectively between 2010 and 2013 in the Jackson metro area.

The second largest city in Massachusetts, Worcester claims a number of major healthcare institutions among the city’s most significant employers. UMass Memorial Health Care leads the way, with over 13,000 employees, followed by the Reliant Medical Group and Saint Vincent Hospital with about 2,100 each. Worcester ranked in the top 100 (out of 379) for four of the five metrics SmartAsset considered.

The Rochester metro area (which also includes Dover, New Hampshire), ranked in the top 50 of the 379 metros in SmartAsset’s analysis for both its three year income growth (18%) and the number of current job openings (7.97 listed on Indeed.com for every 1,000 area employees). There are two major hospitals in the area: the Frisbie Memorial Hospital in Rochester and the Wentworth-Douglass Hospital in Dover.

The Lawrence General Hospital is currently undergoing a $72 million expansion, including the addition of 42,250-square-foot surgical building. That, in a town of less than 100,000 may explain why there are so many healthcare job openings currently listed in Lawrence. Indeed.com lists more than 8,000 (133 for every 1,000 people employed in Lawrence) the highest number of any city in SmartAsset’s analysis. 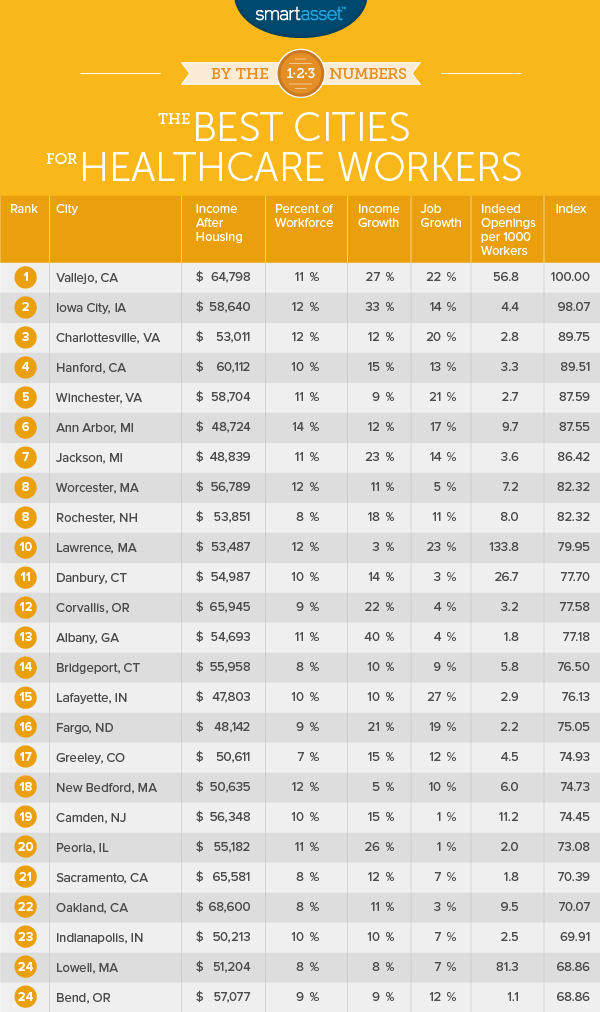