The Best American Cities to Work in Tech in 2017 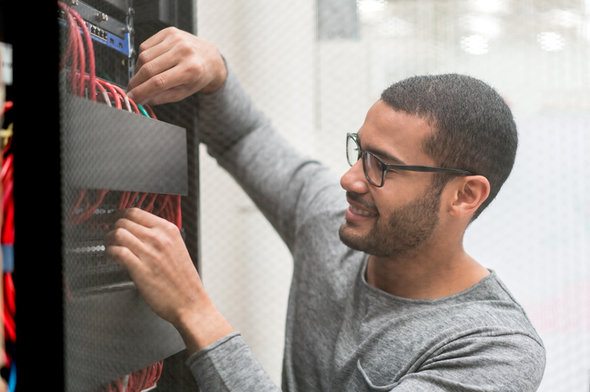 You probably picture San Jose or San Francisco when you picture tech cities. But with the cost of living in the Bay Area sky rocketing, the generous benefits tech workers receive may no longer feel like a lot. The good news is that tech jobs are booming in places across the country where costs of living are lower but the wages are still high. For the fourth year in a row, SmartAsset looked at these and other factors to find the best cities to work in tech.

Time to buy a home? Check our mortgage rates in your area.

In order to find the best cities to work in tech, we looked at data on five different factors. We considered the percent of workers employed in tech, the ratio of the average tech salary to the average salary across all fields, the cost of living, the unemployment rate and average salary for tech workers. Check out our data and methodology section below to see where we got our data and how we put it together.

This is SmartAsset’s fourth annual study of the best cities to work in tech. Check out the 2016 work in tech study here. 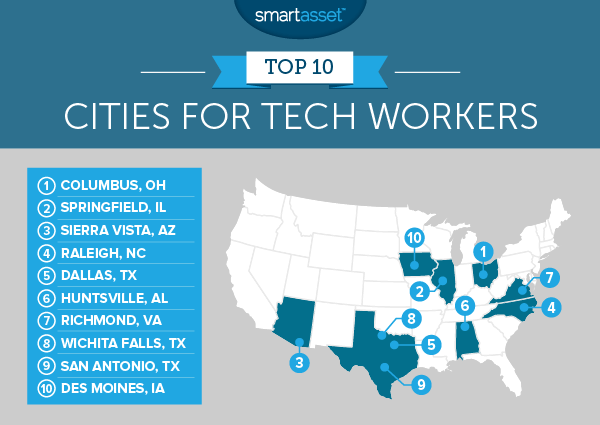 The city also benefits from being home to one of the largest schools in the county, Ohio State University, which supplies fresh-faced tech workers for local tech businesses. In fact Columbus is one of the best cities for new college grads. The only metric Columbus tech workers may be concerned about is the unemployment rate. The unemployment rate for holders of bachelor’s degrees is 2.9%, the fifth-highest in the top 10.

Another state capital, Springfield, Illinois, takes second place. Springfield has the eighth-lowest unemployment rate for workers with a bachelor’s degree (1.6%). Springfield tech workers are also well paid. They earn an average of $83,500 per year, which is 69% more than the average salary in the city.

All those tech jobs in the area mean Raleigh is a great place to work in tech. About 5.8% of all workers in the city work in tech, the 11th-highest rate in the country. Another plus for tech workers is the pay. On average tech workers earn just over $89,000 per year, the second-highest amount in our top 10. However, that paycheck does not go quite as far in Raleigh as it may in other cities. Raleigh has a cost of living only 6% lower than the national average, a relatively high score for our top 10.

Dallas rose nine spots from last year’s study to claim the fifth spot. The city owes its rise in our ranks to its improving unemployment rate for bachelor’s degree holders and the increased salary tech workers earn. Last year our data showed that bachelor’s degree holders had an unemployment rate of 4.1%. That number fell to 3.3% in this year’s study. Compared to last year, tech workers also earn $4,000 more per year on average.

Dallas’ best scores came in the aforementioned tech salary metric. Dallas tech workers are the 21st-highest paid in the country. This city also has a large concentration of tech workers. About 5.8% of workers in Dallas work in tech, the 15th-highest rate in the country.

Huntsville is the tech capital of Alabama. Over 6.1% of workers in Huntsville work in tech, a score only surpassed by one city in our top 25. Huntsville tech workers are also well compensated for their work, especially when you compare the salary to the low cost of living. The cost of living in Huntsville is about 8% less than the national average while the average tech worker earns just under $93,000 per year. Another plus for Huntsville workers is the relatively low taxes in Alabama, meaning workers keep a large chunk of what they earn.

What keeps Huntsville from scoring higher in our ranks in the unemployment rate for bachelor’s degree holders. About 3.6% of graduates with bachelor’s degrees are unemployed, the 126th-worst rate in the study.

Richmond jumped 11 spots from last year. Tech workers in Richmond saw their median incomes rise $3,000 from last year, which lifted the city up the rankings. Other metrics improved, too. Like the unemployment rate for bachelor’s degree holders, which dropped from 3.9% to 3.1%.

Wichita Falls is a city northwest of Dallas, right next to the Oklahoma border, with a population around 100,000. Of the people who work in Wichita Falls, not too many work in tech (only about 1.39%), but the ones who do are well paid. The average tech worker in Wichita Falls earns 1.93 times the overall average salary in Wichita. That is the fourth-highest score in that metric in our study.

The cost of living is also low in Wichita Falls. Our data shows that living there costs 15.5% less than the national average, giving the city the 12th-lowest cost of living in the country.

The big downside for San Antonio workers is that jobs may be relatively hard to find. Our data shows that San Antonio has an unemployment rate of 3.9% for holders of bachelor’s degrees.

Des Moines dropped two spots from last year but managed to stay in the top 10. The city scores fairly well in all metrics, without any single metric leading the way. Des Moines’ best score comes in percent of workers employed in tech (3.7%). The city’s worst score came in the ratio of the average tech salary to the average salary across all fields. The average tech worker only earns 65% more than the average worker. 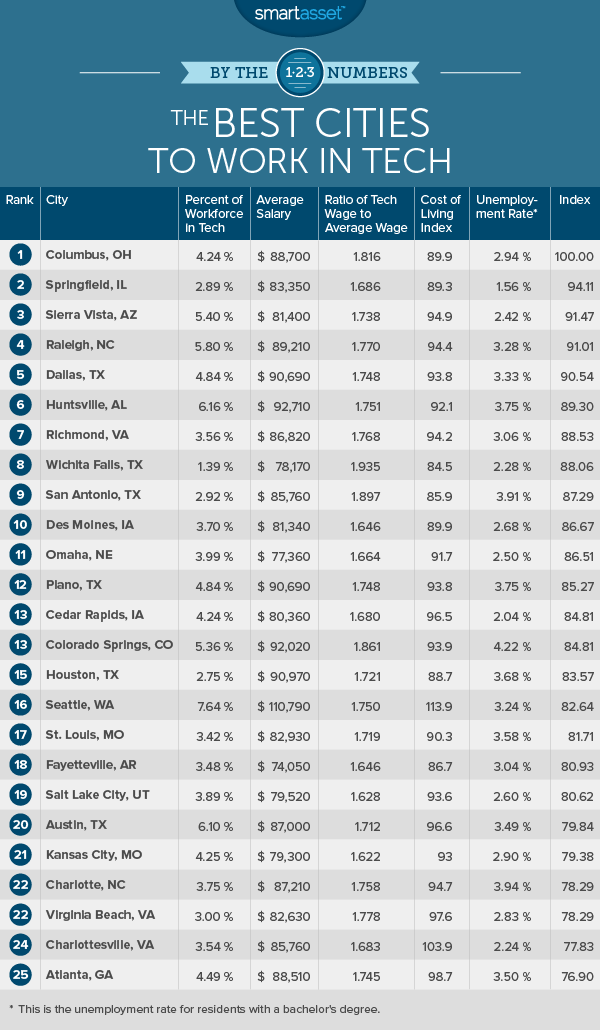 In order to find the best cities to work in tech, SmartAsset looked at data on 201 cities. Specifically, we looked at the following five factors:

If you have recently taken a new job in tech, or are a long-term tech worker,  you may be earning more than you used to. With time, and increased financial muscle, it’s likely your credit score has risen. Combine that with the fact that mortgage rates are at historic lows, now may be a good time to refinance your mortgage.

The primary goal when refinancing is to get a lower interest rate on your mortgage. But there are other reasons to refinance, as well. For example, if you want to lower the overall amount of interest you are paying and can comfortably afford to pay a higher monthly payment, consider refinancing to a shorter mortgage. On the other hand if you have racked up a ton of credit card debt or student debt, consider refinancing to a longer mortgage. This will mean your monthly mortgage payments will go down and you can more aggressively take on your other, more expensive, debt.