Property Tax: Who is Getting the Best Bang for Their Buck? 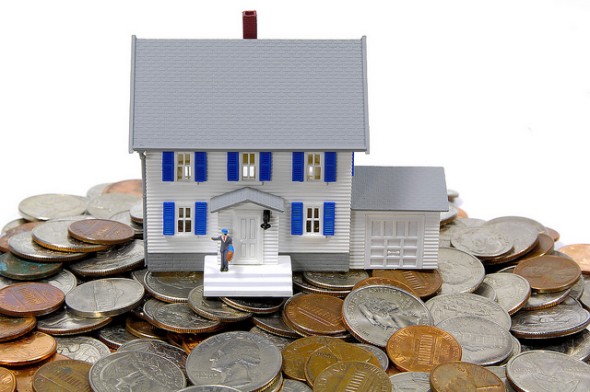 SmartAsset wanted to know who in the country is getting the best deal for their property taxes. To find that out we answered 3 questions: how good are the schools, how safe is the area and how much are the property taxes.

The United States is divided into 3,144 counties (or county equivalents in the case of states like Louisiana and Alaska which use the terms parish and borough). SmartAsset has measured quality of public services (by looking at school rankings and crime rates) in each US county and compared that to the property tax paid per capita. We created a metric we call the tax value index to show where in the country residents get the most and the least for each tax dollar.

Schools are ranked from 10 (the best) to 1 (the worst) according to an average of math and reading performance proficiencies in standardized tests, weighted by number of students. Counties that rate a 10 have schools in the top decile in the state.

The effective tax rates were derived from national census data: The median amount of tax paid divided by the median home value in each county.

To create the tax value index, the county school rankings have been divided by the total violent and property crime rates per 100,000 people in each county and then that number is divided by the average property tax amount paid per person per year to obtain a number representing public service value per tax dollar. We then multiplied that number by 1,000,000 to form the tax value index. Basically, the greater the number, the more residents get for their tax dollars.

We then ranked all counties with populations greater than 50,000 people to find the top 10 and the bottom 10.

The following counties are getting a deal – better public schools and lower crime rates compared to the amount of money they pay each year in property taxes. 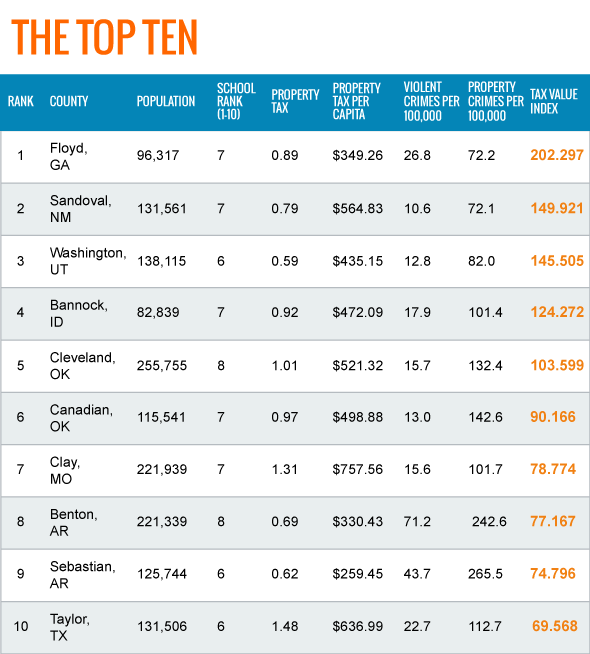 Topping the list is Floyd County, Georgia, which was carved out of the existing, considerably larger Cherokee County in the 1830s. Floyd is one of the northernmost and westernmost counties in the state, along the state line with Alabama, and the county seat of Rome is just over an hour outside of Atlanta. It is home to replicas of a number of monuments from the Roman Empire as well as US News and World Report’s number-one up-and-coming liberal arts school, Berry College.

Sandoval County is part of the Albuquerque metropolitan area. The county is southeast of Los Alamos County, where the famous atomic physics laboratory is located. It has a number of historical and nature preserves of note, including the Bandelier National Monument archaeological site and Cibola National Forest. Sandoval County’s city of Rio Rancho is home to Intel’s Fab 11x, the largest semiconductor plant in the world.

Given the Washington County area’s hot and relatively rainy climate, the earliest white settlers there, Mormon pioneers, tried to experiment with essentially transporting the American South’s farming conditions to Utah. Early cotton growing operations failed, but the nickname of “Utah’s Dixie” stuck. Washington County is actually hundreds of miles closer to Las Vegas than to Salt Lake City. The county seat, St. George, is less than a 2-hour drive from Sin City. It is also home to the headquarters of regional air carrier SkyWest Airlines and a midsize state college, Dixie State University.

Bannock County is near the southeastern edge of Idaho, and contains an interesting geographical feature that is also something of a tourism draw: Geothermal springs, after which the town of Lava Hot Springs is named. The county seat, Pocatello, is notable as the home of Idaho State University. In popular culture, the cult hit comedy flick Napoleon Dynamite was partially filmed here.

Cleveland County is just south of Oklahoma City, and indeed contains part of the city’s boundaries. Its county seat, Norman, is perhaps best known in other parts of the country as the location of the National Weather Center, whose studies periodically made the news during the polar vortex situations of the past winter. The University of Oklahoma, boasting 30,000 students, 3,000 academic staff members, and the renowned Sooner NCAA teams, is also in Norman.

Canadian County, like Cleveland County, is within the Oklahoma City metropolitan area, and its name is only indirectly related to Canada, because it’s called after the Canadian River, whose own name has obscure origins. Historically, Canadian has been a major agricultural center for grain milling, and had one of the largest populations of Czech immigrants in the region at the beginning of the 20th century, whose cultural influence is still felt.

Clay County is part of the Kansas City metropolitan area and near the Kansas border. Clay County is also notable for containing Kearney, birthplace of legendary Old West outlaw Jesse James, and experiencing some weather extremes, including the world record fastest average rainfall accumulation on one day in 1947.

Benton’s county seat, Bentonville, is about half hour outside of Fayetteville. It was also the site of Sam Walton’s Five and Dime Store in 1945, a humble shop that would eventually become the largest public corporation in the world – Wal-Mart. The company is still headquartered in Bentonville, where it employs about 14,000 people at its corporate offices.

Unusually, Sebastian County boasts two county seats. One is the smaller Greenwood and the second is Fort Smith, second-largest city in the state. Fort Smith is home to a branch of the University of Arkansas with about 7,800 students and is historically significant in terms of the American frontier, being home to the infamous Wild West “hanging judge” Isaac Parker.

Taylor County’s seat is the well-known city of Abilene, which is something of a major central-Texas college town with seven institutes of higher education. The Dyess Air Force Base also provides more than 5,000 jobs in Taylor County. Abilene is about three hours west of Dallas.

Our analysis shows the following counties aren’t getting a very good return for their property tax dollars. 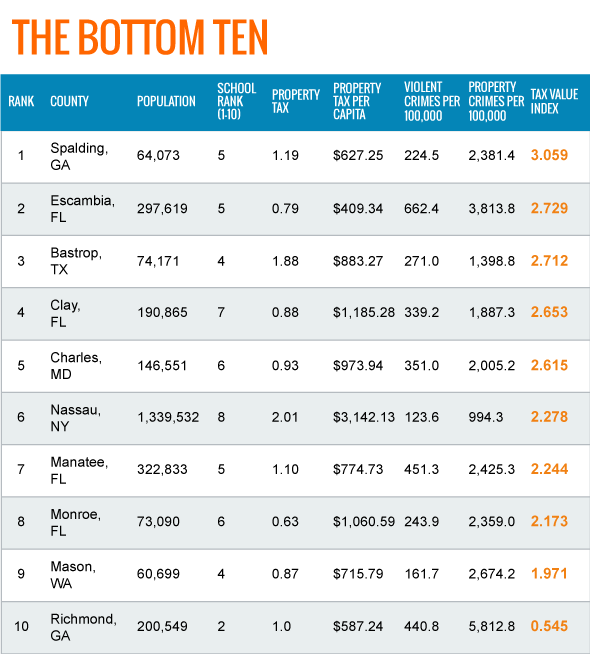 Spalding County is near the center of Georgia about an hour south of Atlanta. It borders eight different counties, including Fayette County, where Fayetteville is located. The oddly-named town of Experiment in Spalding County can be explained by the fact that the University of Georgia’s Agricultural Sciences Center is located there.

Pensacola is Escambia’s county seat, and it is the westernmost county in Florida, being situated at the very end of the Panhandle just east of Baldwin County, Alabama (which came in as the 11th best state for property tax value). A recent controversy led to a Justice Department investigation of conditions at the Escambia County jail.

Bastrop County is just east of Austin. It unfortunately fell victim to the worst wildfire in state history in 2011, when two trees downed power lines during a drought and resulted in a blaze that killed two and caused $325 million in damages. On a pop culture note, two people who are longtime heroes in their fields have lived here: Wrestling great Mark “Undertaker” Callaway and bestselling fantasy author Michael Moorcock.

Clay County played home to the 90,000 soldiers training to fight in Europe in World War II at Camp Blanding, which would have made the army outpost the fourth largest city in the state if it were in fact a city. Clay County just south of Jacksonville, and many personnel of the Naval Air Station in that city live in Clay County.

Charles County borders eight counties, mostly in Virginia, and sits in the Washington, DC metro area. John Wilkes Booth fled through Charles County on his way to Virginia after assassinating President Lincoln. One of the county’s largest employers is the US Navy’s Surface Warfare Center.

Forbes lists Nassau as the wealthiest county in the state of New York in 2012. It is a suburb of New York City on Long Island. All of the towns on the island that are not in either of the New York City boroughs of Brooklyn and Queens are part of Nassau or Suffolk County.

Manatee County is named for a river whose mouth it sits on, which in turn was named for Florida’s state marine mammal. It is south of Tampa and north of Sarasota, and the site of conquistador Hernando de Soto’s landing in 1539 is commemorated with a national memorial west of county seat Bradenton.

Monroe County is split, in a sense. Most of the county land – 87 percent – is on the Florida mainland, but is uninhabited because it is in the Everglades. 99 percent of the population lives on the Florida Keys, all of which are in Monroe County. The county seat is Key West, southernmost city in the continental US.

Mason County borders Tacoma and is part of the Seattle metropolitan area. The Simpson Timber Company has operated in the county seat of Shelton since 1890, producing many Christmas trees for the area. Shelton is the only town in Washington governed by a city commission.

According to our tax value index, the people getting the worst deal for their property tax dollars live in Richmond County, Georgia. Richmond’s county seat is Augusta, home of the Masters international pro golf tournament every April. Richmond County is on the Georgia-South Carolina border and is adjacent to Aiken County, SC.

* Note: Counties with one or more of data factors missing could not be ranked, so out of the 3,144 counties in the US about half of them were included in our list.