Most Livable Places to Impact the 2020 Election 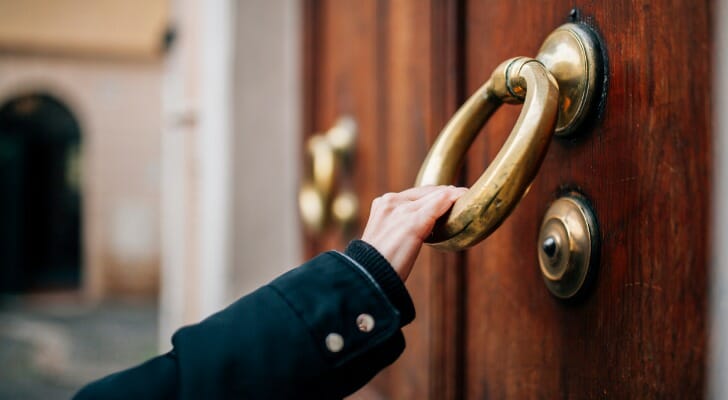 December 4, 2019 – As the 2020 presidential race heats up, it’s important to remember there are significant political contests within the legislative branch, along with state and local elections, that can impact the political future of the U.S. For those who are most passionate about making an impact, voting in swing districts could be more appealing. And no matter where on the political spectrum they fall, voters who are considering moving to those places will be looking at livability as an important factor for where they decide to settle. At the federal level, all 435 seats of the House of Representatives and 35 of the total 100 seats in the Senate are up for election. State executive offices up for election in 2020 include 11 gubernatorial seats, nine lieutenant gubernatorial seats, 10 attorney general seats and seven secretary of state seats. With next November not far away, SmartAsset determined some of the most livable places where your votes may make the most difference in the 2020 elections.

SmartAsset first considered all congressional districts in the 115th Congress. To create a list of swing districts, we found every congressional district where the margin of victory in the November 2018 House election was less than 15%. After gathering data on how close those races were, we looked at livability factors such as median income, median housing costs, poverty rate, unemployment rate and income inequality. For details on our data sources and how we put all the information together to create our final rankings, check out the Data and Methodology below. 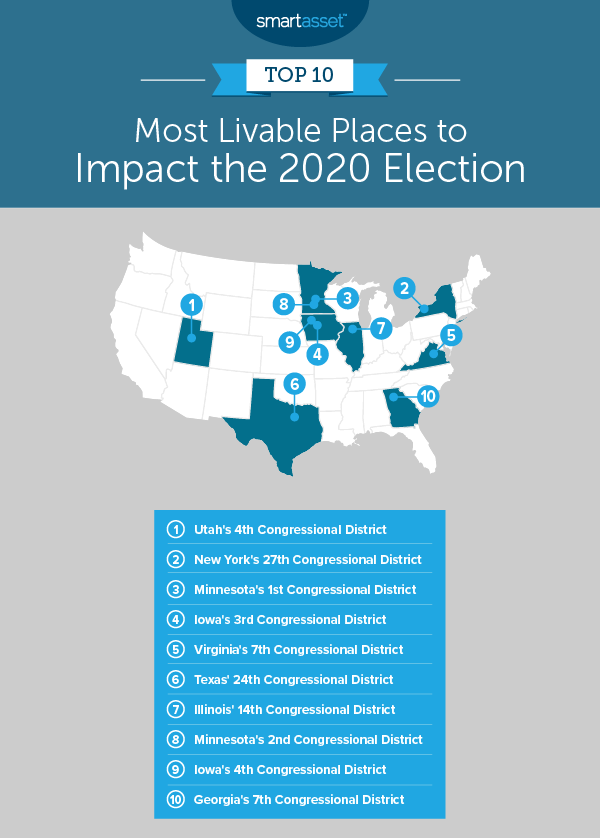 With an estimated 85% of the congressional district concentrated in Salt Lake County, the district is also very livable. In 2017, it had the 11th-lowest unemployment rate of any district in our study and ranks the best overall on our measure of income inequality, the Gini coefficient. A statistical measurement of wealth distribution using a scale of zero to one, where zero represents total equality and one represents total inequality across groups, the 2017 Gini coefficient in Utah’s 4th congressional district was 0.39.

Located in western New York State, New York’s 27th Congressional District encompasses most of the eastern and southern suburbs of Buffalo. The incumbent Republic representative, Chris Collins, narrowly won the House seat in 2018. He had a margin of victory of 0.38%, or 1,084 votes, over Democrat Nate McMurray. Relative to other congressional districts, that is the third-lowest percentage margin of victory and fifth-lowest margin of victory in terms of counted votes.

Minnesota’s 1st Congressional District ranked second in our previous study on the best places to move to make an impact in the 2018 midterm elections. According to Ballotpedia, Tim Walz, the Democratic representative who narrowly won in the 2016 congressional elections, did not seek reelection in 2018. As a result, two new candidates – Republican Jim Hagedorn and Democrat Dan Feehan – ran for the representative position in 2018. Hagedorn narrowly won by a margin of 0.45%, the fifth-tightest race in 2018 in terms of percentage.

In the 2018 congressional election, Democrat Cindy Axne won by 2.16%, or about 7,700 votes, against Republican candidate David Young in Iowa’s 3rd Congressional District. Additionally, according to Census estimates, the 2017 unemployment rate was 3.4%, the eighth-lowest of any congressional swing district. The close 2018 race and the district’s strong performance on livability metrics suggest that it may be a great place for people looking to move to a swing district.

For the first time since the 1970s, a Democratic candidate won the congressional seat in Virginia’s 7th Congressional District in 2018. The margin of victory was only 1.94%, the 17th-lowest of all congressional races that year, indicating that each vote made a big difference. Moreover, on livability factors, the district ranks in the top half of the 128 congressional districts in our study on all but one factor – median monthly housing costs.

Part of northern Illinois and surrounding the outer northern and western suburbs of Chicago, Illinois’ 14th Congressional District counts Democrat Lauren Underwood as its representative. In the 2018 election, she won the seat by a margin of 5% over her Republican opponent, Randy Hultgren. Though this is a wider margin than the margin in eight other districts in our top 10, the district does well in terms of livability. Incomes in Illinois’ 14th Congressional District are high, surpassing even those in Texas’ 24th Congressional District. Specifically, the median individual income within the district was almost $52,500 in 2017, the highest of any district in our top 10 and 10th-highest of all 128 districts in our study.

Though the margin of victory in terms of both percentage and number of votes was not as close in 2018 in Minnesota’s 2nd Congressional District than in many other districts in our top 10, the district ranks in the top 40 of our study on four of the five livability factors. It has the 15th-lowest unemployment rate, sixth-lowest poverty rate, fifth-lowest Gini coefficient and 37th-highest median individual income.

Housing costs in Iowa’s 4th Congressional District are the lowest of any district in our top 10. According to Census estimates, 2017 median monthly housing costs were $713, meaning that residents would spend a rough average of $8,500 on housing annually. In the most recent congressional election, Republican Steve King narrowly won the seat against Democrat J.D. Scholten by a margin of 3.33%, or 10,431 votes.

Georgia’s 7th Congressional District rounds out our list with the tightest 2018 congressional election of any district in the U.S. The spread between the victor, Republican Rob Woodall, and runner-up, Democrat Carolyn Bourdeaux, was only 0.15%, or 421 votes. On the five livability factors, Georgia’s 7th district scored particularly well for the metric of median individual income. According to Census estimates, the 2017 median individual income for residents in the district was more than $47,000 and the 28th-highest of all 128 congressional districts in our study.