The Hottest Secondary Home Markets in the U.S. 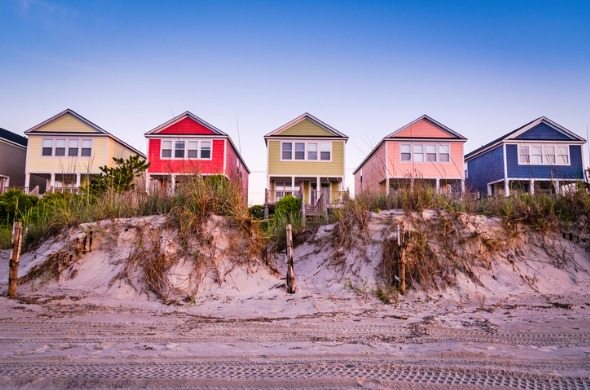 People buy second homes for a variety of reasons. Some people buy a beach home as a place to get away during the winter months, others buy a place next to their favorite mountain to enjoy the slopes. Homebuyers may choose to buy second homes as investments, taking advantage of rising home values. For some that move has paid off. The median home value in the U.S. increased from $194,500 in 2015 to $205,000 in 2016.

But purchasing a second home is much more popular in some metros than in others. Below we look at home purchase data to find the hottest secondary home markets in the U.S. In order to create this ranking, we looked at data on 402 metro areas. We compared the number of homes purchased as primary residences and compared it to the number of homes purchased as secondary residences. Check out our data and methodology below to see where we got our data and how we put it together to create our rankings. 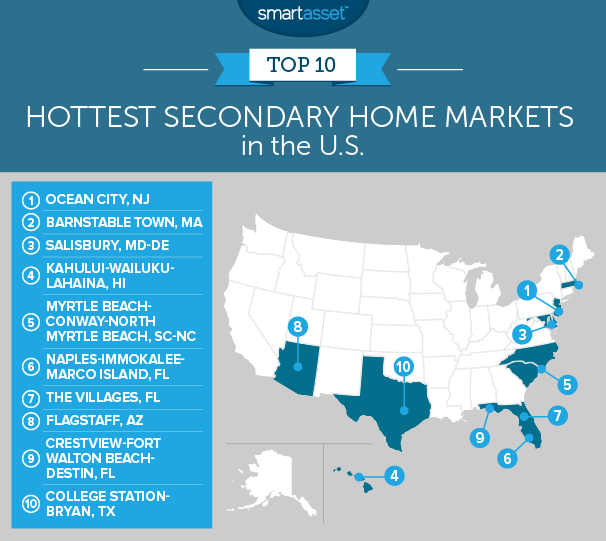 Ocean City lies on the famous Jersey Shore. In total almost 72% of all homes purchased in this metro area were purchased as non-primary dwellings, the highest rate in our study.

Located within the Barnstable Town metro area is Massachusetts’ favorite vacation spot, Cape Cod. About 4,650 homes were bought here in 2016 and roughly 44% of those were to people purchasing secondary homes.

On average secondary homebuyers in this metro area took out a mortgage worth 1.39 times their income to purchase their house. For buyers purchasing a primary residence, the average mortgage-to-income ratio was 2.5.

About 43% of the 7,548 homes purchased in Salisbury in 2016 were purchased by people acquiring a second home. On average, people buying second homes had an income worth 2.6 times what people purchasing a primary dwelling had.

Who wouldn’t want to own a home in Maui? Around 36% of all homes bought in this slice of paradise were purchased by secondary homebuyers.

One of the most historic beach locales in America takes our fifth spot. According to data from the Consumer Financial Protection Bureau, about 65% of homes purchased here in 2016 were by primary residence homebuyers. That leaves 35% of homes going to people buying secondary homes.

Homebuyers buying a primary residence in this metro had the lowest average mortgage in our top 10.

Located in Southwest Florida, Naples-Immokalee-Marco Island is another popular spot for secondary homebuyers. Of the roughly 6,800 homes bought here in 2016, 2,360 were purchased by people in the market for a secondary home. On average people purchasing secondary homes in this metro had an income of $330,000 and took out a mortgage of about $397,000.

The Villages, a retirement community in Florida, is an attractive place to buy for people in the market for a second home. Properties here are much more affordable on average than they are in Naples-Immokalee-Marco Island. The average homebuyer buying a secondary home here took out a mortgage of only $195,000. That same figure for people buying a primary residence is $204,000.

Around 2,030 homes were purchased here in 2016. Of that number 628 went to people buying second homes. That equals roughly 30.9% of all homes. Homebuyers in Flagstaff who were purchasing primary residences took out a home loan worth about 2.8 times their income on average. When purchasing a home it’s important to factor in long-term costs like property taxes. Arizona’s average effective property tax rate is 0.84%, well below the national average.

This metro area is part of Florida’s northwest corridor, between the Pensacola metro area and the Panama City metro area. In the past we’ve found that Fort Walton is a good option for those hoping to purchase an affordable beach town.

Our list ends in College Station-Bryan, the 10th-hottest secondary home market. According to our data, 29.3% of all home purchases in this metro were made by people looking for a secondary home. 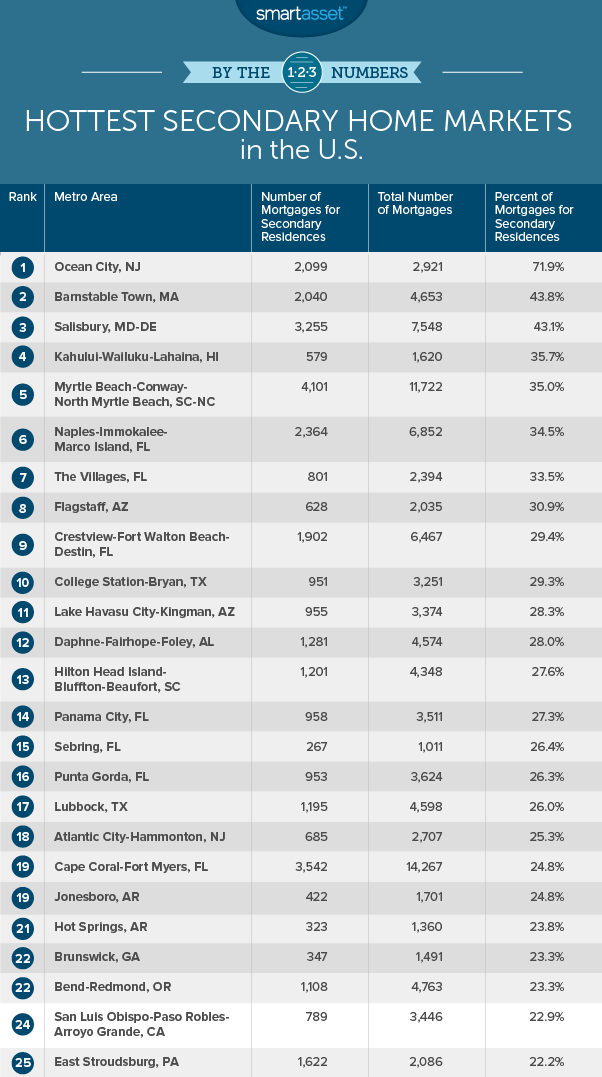 In order to find the places with the hottest secondary home markets in the U.S., we looked at data for 402 metro areas. We compared them across the following two metrics:

Data for both metrics comes from the Consumer Financial Protection Bureau’s Home Mortgage Disclosure Act Database and is from 2016.

Tips for Buying a Second Home