High Homeownership Counties Were Twice as Likely to Vote for Trump 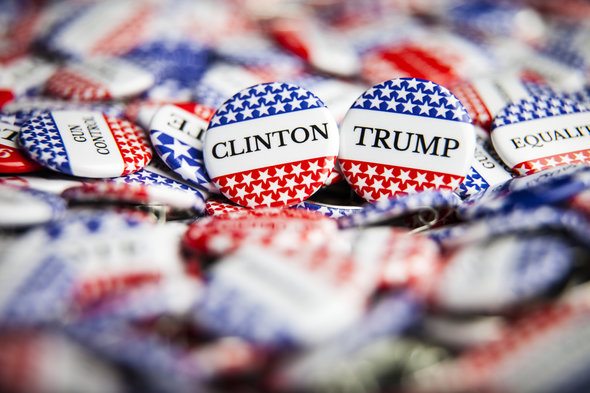 Ahead of the presidential election, publications like the New York Times, the Huffington Post and 538 gave Hillary Clinton somewhere between a 65%-99% chance of winning the election. You know what happened next. As November 8 ticked into November 9 and it became less and less likely that Clinton would win, people began wondering how forecasters got it so wrong.

Now that a month has gone by and pollsters have had a chance to look into the data, some partial explanations have emerged: pre-election polls underrepresented Trump voters, two candidates with historically low approval ratings caused voters to stay home and white working class voters in the Rust Belt came out strong for Trump. As personal finance is SmartAsset’s specialty, we decided to look at voter statistics through that lens.

We examined data on homeownership rates, median home values, credit card debt, costs of living, the percentage of the population with health insurance and the percent change of median income from 2010-2014 in 2,127 counties. We compared that data to the percentage of people in each county who voted for Donald Trump, the winning candidate. By doing this we can see which personal finance metrics correlated with voting for Trump.

Even in cases where the charts show a strong correlation readers should not assume the relationship is causal. There are a variety of reasons people pick their preferred candidate, some economic, some cultural and so on, making it hard to isolate any one cause. 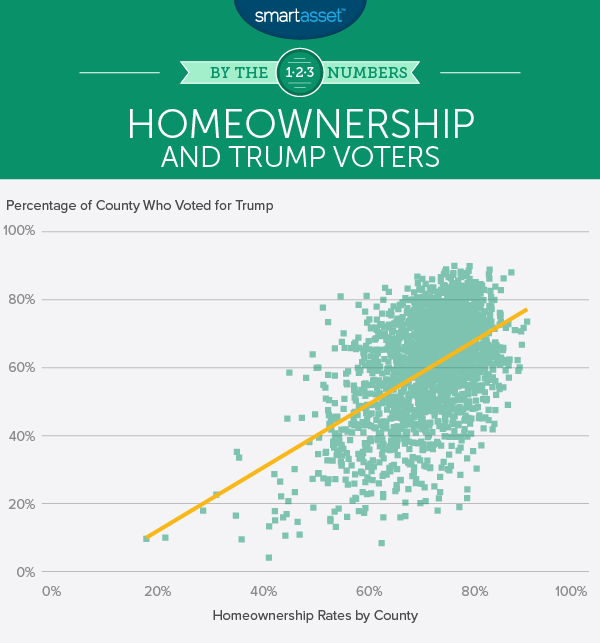 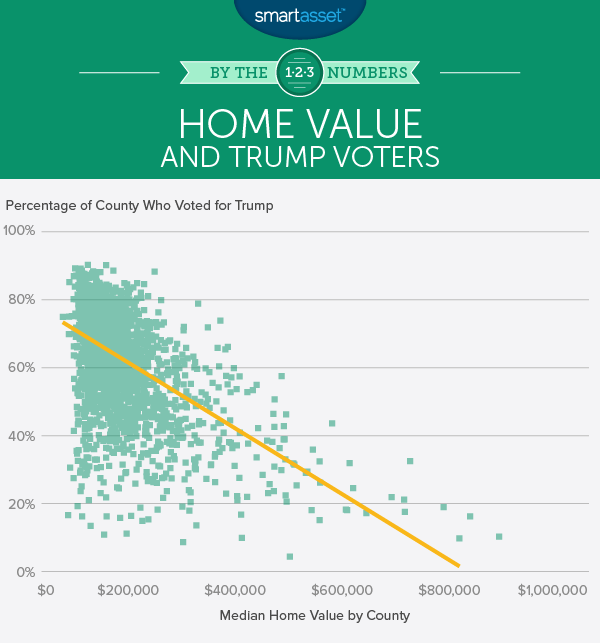 At the other end of the spectrum is McDowell County, West Virginia. McDowell County has the lowest median home value ($38,100) and Trump won the county by 49 points.

Find out: Should you rent or buy? 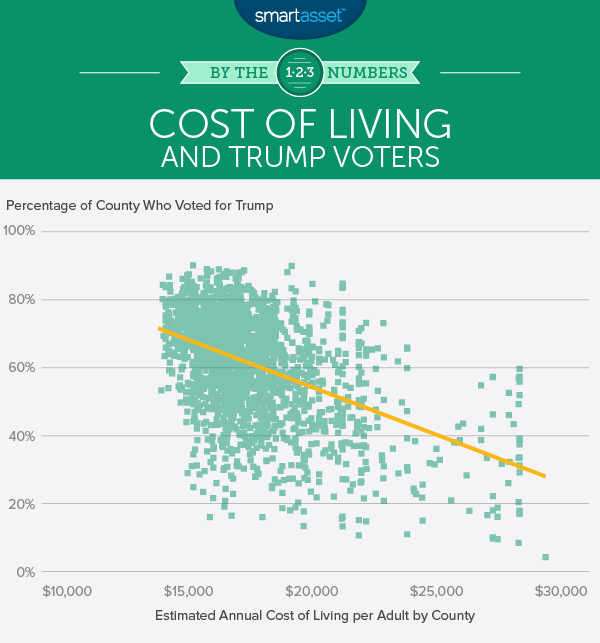 The average cost of living across all counties we looked at is $17,600 (for one adult). In the 52 counties in our study where living costs exceed $24,000 per year, Trump lost by 33 points on average. Once again the District of Columbia is the county which voted for Clinton the most and has the highest cost of living in the country at about $28,000 per year. Trump lost D.C. by a whopping 88 points.

Trump received more support as a place became less expensive to live in. In Converse County, Wyoming, which has the third-lowest cost of living in the country at $14,400, Trump received 84% of votes.

Related Article: Here’s How the Trump Tax Plan Could Affect You 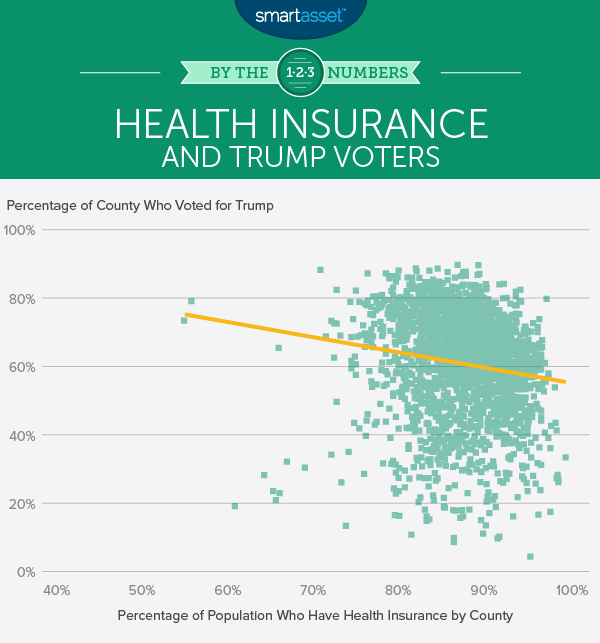 Trump spent a lot of time during this election season hammering home his opinion that Obamacare is a disaster for the country. One of his big campaign promises was that he would repeal President Obama’s signature health care law. Did the success or failure of Obamacare determine how people voted? The data suggests not really.

The trend shows that people who voted for Trump tended to be slightly less likely to have health insurance but the relationship was not very strong.

The least-insured county in our study is LaGrange, Indiana. Only 55% of the population has health insurance and 73% of votes there went to Trump. On the other end of the spectrum 97.5% of people living in Norfolk, Massachusetts have health insurance and only 33% voted for Trump. 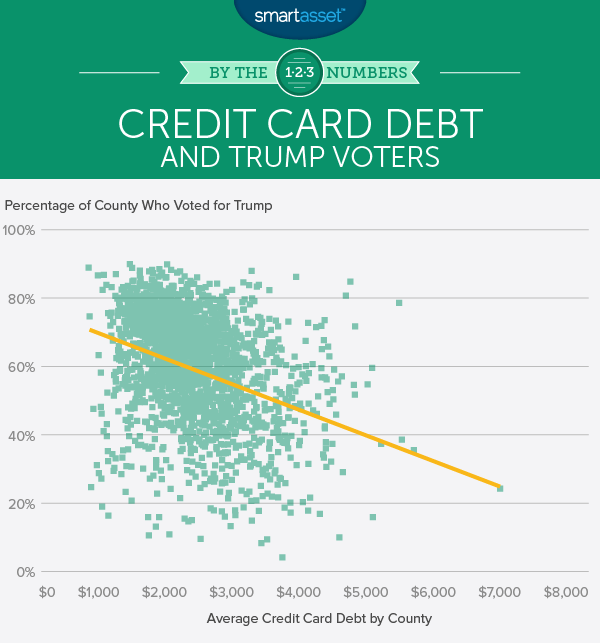 On average residents of Jackson County, Kentucky have just $816.66 in credit card debt. Trump won by the county by 80 points. 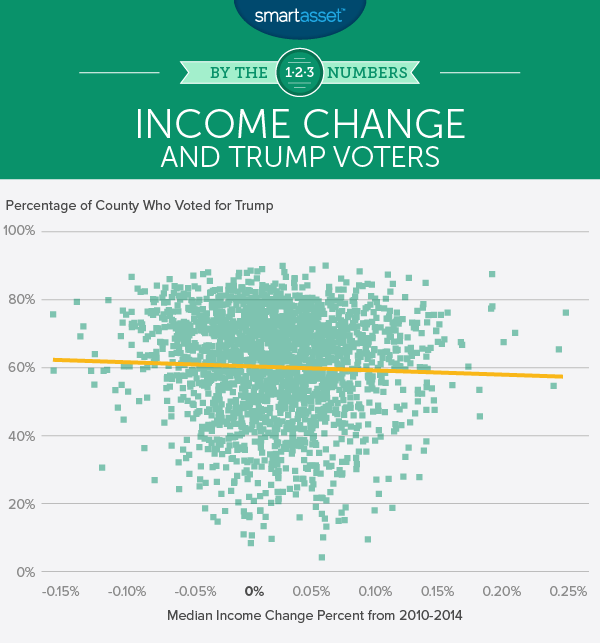 Another key part of Trump’s election messaging was that so-called elites had betrayed American workers by outsourcing their jobs and by extensions their livelihoods. Despite this rhetoric, our data suggests that whether or not a counties’ median income grew or shrunk over the past five years was not a major factor in the election.

You can find evidence for places which saw incomes shrink voting for Clinton, like Hertford County, North Carolina where median incomes shrunk 10% on average from 2010 to 2014, and 70% of the voters voted for Clinton. You can also find places like Knott County, Kentucky where incomes shrunk 14% on average over the same timeframe, and Trump won by 50 points. The same is true for counties in which median incomes grew as well.

Interestingly, in areas with large changes in income in either direction, Trump came out on top. Of the 10 counties in our study with the most income growth, only one county – Iberville, Louisiana – went to Clinton. Similarly, of the 10 counties in our study where incomes shrunk the most, only the aforementioned Hertford, North Carolina went to Clinton.

Of course income alone does not reflect the entire economic reality of a county. Specifics like job quality and job type are also potentially important indications.

In order to create these charts, we gathered data on six metrics and compared them to the election results in 2,127 counties. Election results data comes from the American Press Bureau. The data does not include Alaskan counties, nor does it include counties for which we did not have data.