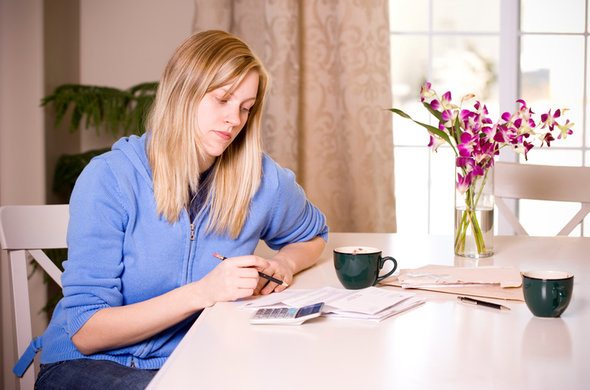 The average woman earns 80% of what the average man earns, according to U.S. Census Bureau data. The real-world implications of the pay gap sometimes get lost in the discussion around the issue. Of course, being paid less is bad, but when it comes to things like housing, for example, women may be worse off than the pay gap suggests. What can appear to be a minor pay difference may be the difference between living in affordable housing or not.

Thinking about making the leap from renting to owning? Check out our rent vs. buy calculator. 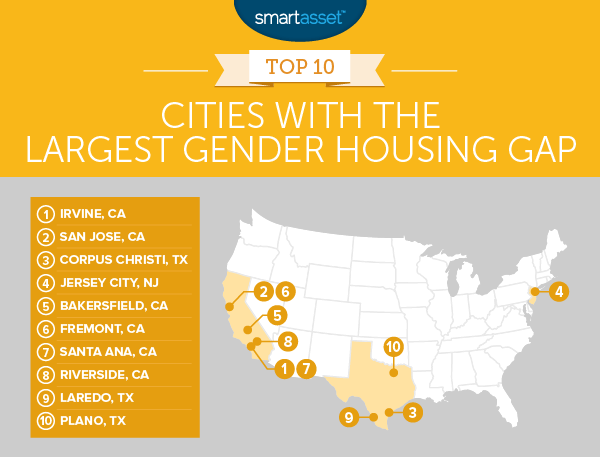 Our data shows that the average Irvine woman earns around $41,000 per year. Unfortunately for Irvine women, the average one-bedroom costs $1,785 per month. That means an Irvine woman who earns the area’s median salary would have to put 52% of her income toward the average apartment.

The situation for men is quite different. Irvine men earn substantially more: $71,100 per year, on average. So renting the average one-bedroom would cost only about 30% of their income. This puts them right around the Department of Housing and Urban Development’s housing affordability threshold.

Rents in the Bay Area are expensive for everyone, and even more expensive for women earning the median salary. The average woman in San Jose makes about $32,700. She would need to spend 53% of her earnings to pay the rent on the average one-bedroom in the San Jose area.

In fact, while women probably need to find roommates in order to not be housing cost-burdened, the average man should have no problem paying for an apartment alone. It would cost just over 25% of the average man’s income to pay for the average one-bedroom in Corpus Christi. That same figure for women is over 41%.

Jersey City is one of the most livable cities in the country. But the large pay gap in the city means it’s a more livable city for men than it is for women. Women in America’s Golden Door earn about 64% of what men earn, making housing less affordable for women. Data from the Census Bureau shows that renting the average one-bedroom apartment in Jersey City will set you back around $1,090 per month.

Bakersfield, California is relatively affordable. Of all the cities in our top 10, Bakersfield is actually the second-most affordable for women. It’s also a good city to get out of credit card debt. So why does Bakersfield have the fifth-highest gender housing gap?

The average Bakersfield man, who earns just under $39,000 per year, according to Census Bureau data, need only sacrifice 21.4% of his income to pay the rent on the average one-bedroom apartment. On average, women in Bakersfield earn less: around $23,000 a year. To pay for the same one-bedroom apartment, they’d need to sacrifice 36.4% of their income, making them housing cost-burdened.

In our study of the safest cities in America, Fremont, California ranked second. For this study, we discovered that the average Fremont woman has to spend over 42% of her income to afford the rent on a one-bedroom. That’s squarely on the wrong side of HUD’s housing cost-burden benchmark.

On the other hand, the average man in Fremont takes home $76,000 per year. That means the average man is only sacrificing 27.4% of his income in order to pay for a $1,700 one-bedroom apartment (the median cost).

To rent the average one-bedroom abode in Santa Ana, the average woman would need to fork over just under 70% of her income. That’s an alarming statistic. To be fair the situation is only a little better for men. The average man would need to pay around 54% of his income to afford the same apartment. This makes Santa Ana the least affordable city in our top 10 for both men and women when it comes to renting a one-bedroom.

The final California city in our top 10 is Riverside. This city, about 50 miles east of Los Angeles, is home to some underpaid women. Women in Riverside, on average, earn 73% of what men earn. Women earn $22,790 per year, while men earn $31,251 per year, on average.

This puts women in a bind when they are looking to find good deals on a one-bedroom apartment. The average one-bedroom, according to Census Bureau data, costs about $950 per month, which would eat up 50% of the average woman’s income. For men that same figure is 36.8%, for a difference of 13.7 percentage points. It’s worth noting that both those stats are considered housing cost-burdened by HUD.

In order to afford the same apartment, men would need to pay, on average, less of than 25% of their income. 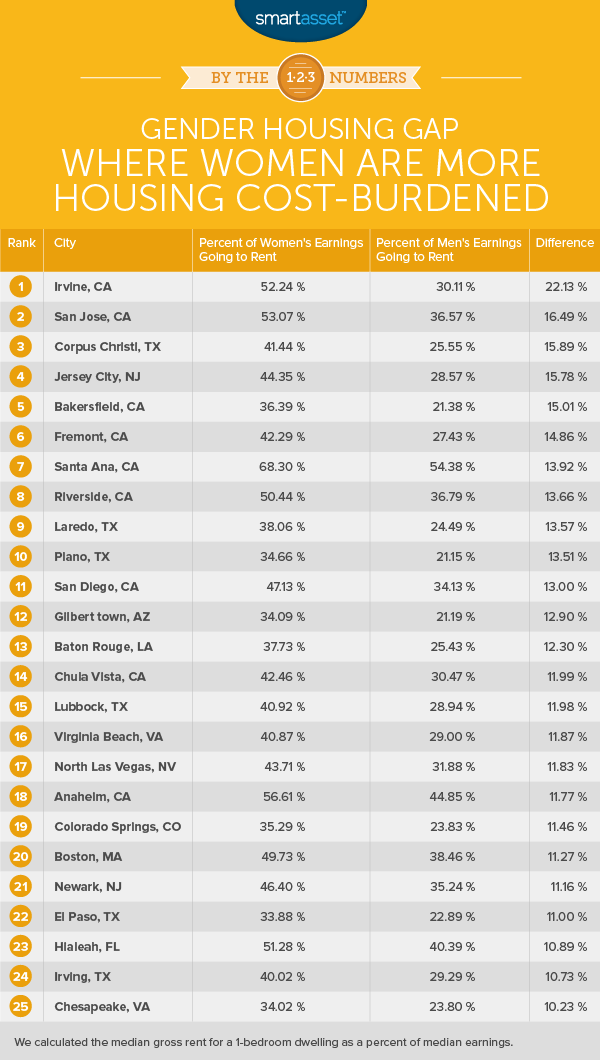 In order to find the cities with the biggest gender housing gaps, we gathered data on the 100 largest cities in the U.S. and looked at the following three factors: