Florida Housing Markets on the Rise 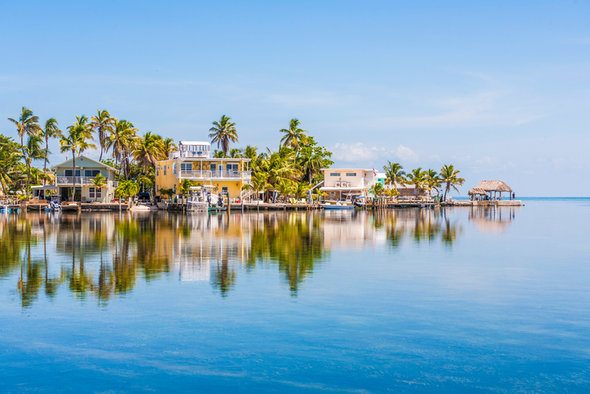 Florida has some of the most volatile housing markets in the country. The Sunshine State was one of the worst affected during the subprime mortgage loan crisis, with mortgage delinquency rates hitting 20% in 2009. But in recent times the state has seen explosive home value growth. Median home values in the state jumped 10% from 2014 to 2015. With home values growing so fast, there are rising Florida housing markets worth checking out.

In order to find the fastest-rising housing markets in Florida, we looked at city data for population growth, housing stock growth, median home value growth and median income growth. To understand where we got our data and how we put it together, see our data and methodology section at the end of this article. 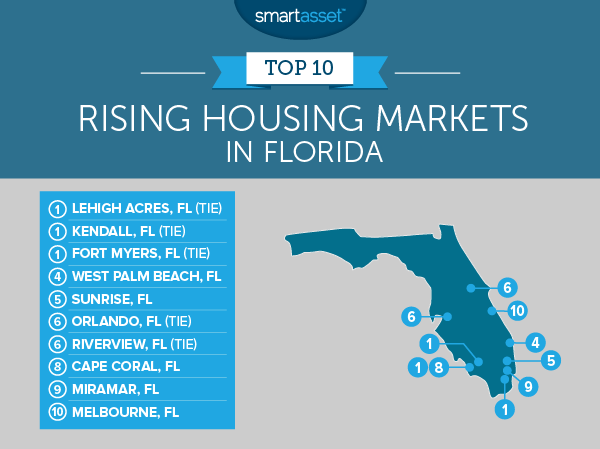 For those readers worried about inflated numbers there are signs that demand for housing here is growing, meaning the values are less speculative than in the past. The number of people living in Lehigh Acres has grown from 98,100 in 2011 to 119,480 in 2015. That’s an increase of 21.8%. During the same time, the number of housing units dropped.

Kendall, not to be confused with Kendall Green or Kendall West, is located just outside of Miami and is one of three cities tied for the fastest-rising housing market in Florida.

Tied with Lehigh Acres and Kendall for the fastest-rising Florida housing market is Fort Myers. Perhaps best known as the spring training base for many Major League Baseball teams, Fort Myers was also a 2016 boomtown. From 2011 to 2015, the population growth outpaced new housing stock growth by 10.8%. The median home values grew 57% over that same time period.

No city in the top 10 saw a bigger decline in housing stock than West Palm Beach. From 2011 to 2015 its housing stock shrunk 4.6%, from 54,482 housing units to 51,976 units. When you combine that with the increase in population (the West Palm Beach population grew 5.7% from 2011 to 2015), you can see there was a pretty steep uptick in demand for housing. Over that same period West Palm Beach residents saw their incomes increase by 16%, meaning they have more income which they can put toward housing.

Located about 30 miles from Miami is Sunrise, our fifth-fastest rising Florida housing market. Only one city in our top 10 saw faster income growth than Sunrise. That’s a good sign for people interested in homes in the area. This city has also seen noteworthy population growth. From 2011 to 2015, the city experienced a population boom of 7.8%. That increase outpaced the rate of new homes by 1.9%. Even more impressive than those two stats is the change in home values. From 2011 to 2015 median home values in Sunrise grew 37%.

Orlando is the biggest city in our top 10. Despite being so large, it still saw impressive population growth. From 2011 to 2015 the population in Orlando grew 11.4%, the third-fastest growth in the top 10. During the same time, there was a bit of a housing boom in Orlando. The number of housing units jumped 8.2%. This leaves a difference of 3.2%, meaning more people are chasing fewer housing units. That increases the likelihood that home values will rise. Orlando’s best score came in income growth. Thanks in part to the growing tech industry and the tourism industry, incomes in The City Beautiful grew 16%.

No city in our top 10 is faced with a bigger housing crunch than Riverview. New people in the area outgrew new homes by a whopping 32.4% from 2011 to 2015. This increased demand for housing led to homes growing in value by an average of 22% over the same time period.

What is causing Cape Coral home values to rise so fast? It comes from both a lack of supply (population numbers outgrew housing stock by 7.6%) and new demand – Cape Coral residents saw incomes grow 7.3% from 2011 to 2015.

If you bought a home in Miramar in 2011, you are probably patting yourself on the back right now – as long as you didn’t sell it. From 2011 to 2015, median home values in the area grew an astonishing 61%. What can explain such growth? Well, the population outgrew new homes by 8.4%, the fifth-highest rate in the top 10, increasing the demand for housing. The median incomes in Miramar grew 4.7% over that same time period.

From 2011 to 2015, the housing stock in Melbourne decreased by 11.8%. Over that same time period the population grew 5.3%, for a net difference of 17.1%. That means plenty of demand for housing. The area has not seen the most impressive home value growth – only 18.8% from 2011 to 2015 – but thanks to the demand for housing, we expect that number to rise. Residents of Melbourne should also be able to afford slightly more expensive homes, as well. They saw their incomes rise almost 12% on average from 2011 to 2015.

In order to find Florida housing markets on the rise, we looked at data on 42 different Florida cities. Specifically we looked at: