The Best States for Homeowners in 2018 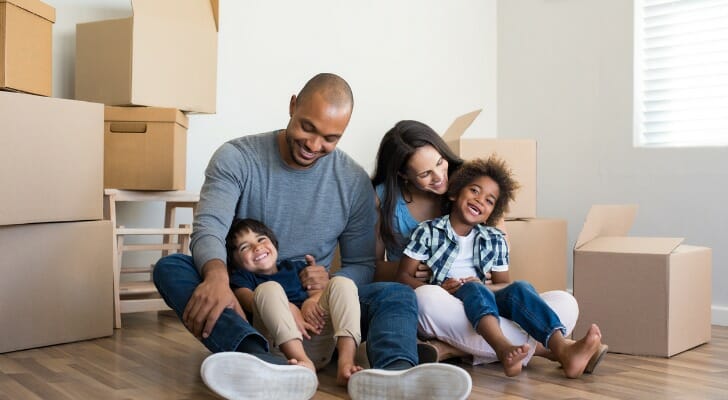 Homeownership is a hallmark of American society. Data from the Federal Reserve Bank of St. Louis shows that 64.2% of homes in America are owner-occupied, and a Pew Research survey from 2016 found that 72% of renters would like to own a home at some time in the future. But the benefits to home ownership are different based on which state you live. Some states have seen fast-growing home values while others offer affordable mortgages, thanks to low property tax rates.

In order to find the best states for homeowners, we looked at nine metrics. Specifically we looked at average price per square foot, the one-year percent change in value per square foot, foreclosures per 10,000 homes, average effective property tax rate, median annual property taxes, average closing costs, average homeowners insurance and the burglary rate. Check out our data and methodology section below to see where we got our data and how we put it together. 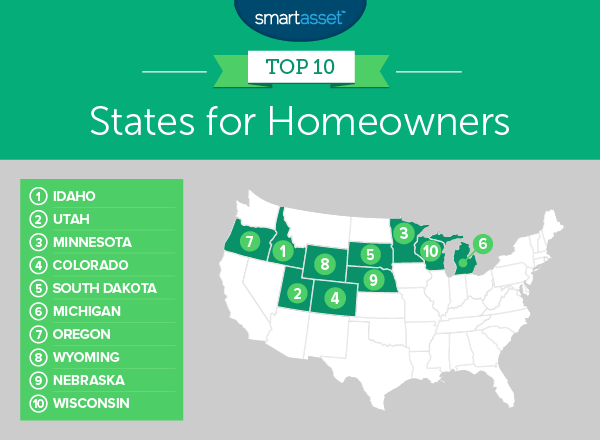 Idaho is a great place for homeowners looking to make a profit on their home investment. From 2016 to 2017, the value per square foot of the average home in Idaho increased by 9.3%. That is the sixth-fastest rate recorded in our study.

The state is also a fairly safe place to be a homeowner. Homeowners insurance costs are low here and Idaho has the 16th-lowest burglary rate in our study. Homeowners in it for the long-haul can rejoice as well: Idaho’s property tax rates are the 14th-lowest in our study.

The median home in Utah has a value of $205 per square foot. That is the sixth-most in the study. You can probably expect that number to continue rising as well. From 2016 to 2017 that figure grew by 9.4%, a top 5 rate. One cost that new homebuyers may overlook is closing costs. That isn’t too much of a concern in Utah. Average closing costs are under $1,900, the fifth-lowest in our study.

The main concern for Utah homebuyers may be the upfront affordability. The average home in Utah is worth 3.79 times the median annual income, a below-average figure.

Minnesota scores well across the board, securing the third spot. In total this state scored better than 50% of states in six of our nine metrics. Notable scores include foreclosure rate, average closing costs and burglary rate. In each of those metrics Minnesota scored in the top 15.

Homes here are also more affordable for the average homebuyer than they are in the two states ranked above. The average home in Minnesota is worth 3.23 times the median household income.

Colorado homes come with a high upfront cost, but if you can manage to become a homeowner here it is likely your investment will pay off. In 2018, the average Colorado home had a value per square foot of $230. That figure rose nearly 9% from 2016 to 2017.

The one stumbling block, as mentioned, is the upfront cost. The average home here is worth nearly 4.8 times the median household income. But if you’re a Colorado homeowner with good credit, you may be able to secure a low mortgage rate. After paying off the mortgage you won’t have to worry about long-run costs. Colorado’s effective property tax rate is only 0.51%, third-lowest in our study.

South Dakota comes in fifth, primarily thanks to the lowest foreclosure rate in the study and the second-lowest average closing costs. Other important metrics include affordability. The average home here is worth less than three times the median household income, meaning most households should be able to buy a home.

Another Midwest state pops up in this top 10, this time it is the Wolverine State in sixth. Michigan has affordable homes which are quickly growing in value. Census Bureau data shows that the median home in Michigan is worth only 2.8 times the median household income, and from 2016 to 2017 the value per square foot of the average home grew by 9.2%.

In each of those metrics Michigan ranks in the top 10.

Homes in Oregon are a pretty good investment. From 2016 to 2017, the value per square foot of the average home in Oregon grew by 10%. For that metric, Oregon ranks fourth. Unfortunately not every Oregonian may be able to get in on the home-buying bonanza. The median home here is worth five times the average household’s annual income. Oregon property taxes are also higher than average.

The Cowboy State ranks eighth. This state is one of the safest for homeowners. According to data from the FBI, Wyoming has a burglary rate of 303 per 100,000 residents, which is the ninth-lowest in the study.

The Midwest domination of this list continues in Nebraska. The Cornhusker State takes a top 10 spot thanks to its affordability. The median home is worth only 2.6 times the median household income in Nebraska, meaning the dream of homeownership should be open to most residents. Closing costs are also low and Nebraska is a safe state for homeowners. In both average closing costs and burglary rate Nebraska ranks in the top 15.

The long-term costs of owning a home are slightly on the high side, however. Nebraska property taxes are some of the highest in the top 10.

Wrapping up the top 10 is Wisconsin. This state scored in the top 10 in three different metrics, including average closing costs, average annual homeowners insurance costs and burglary rate.

Wisconsin also posted above-average scores in affordability and foreclosures. Census Bureau data shows that the median home in Wisconsin is worth just 3.05 times more than the median household income. 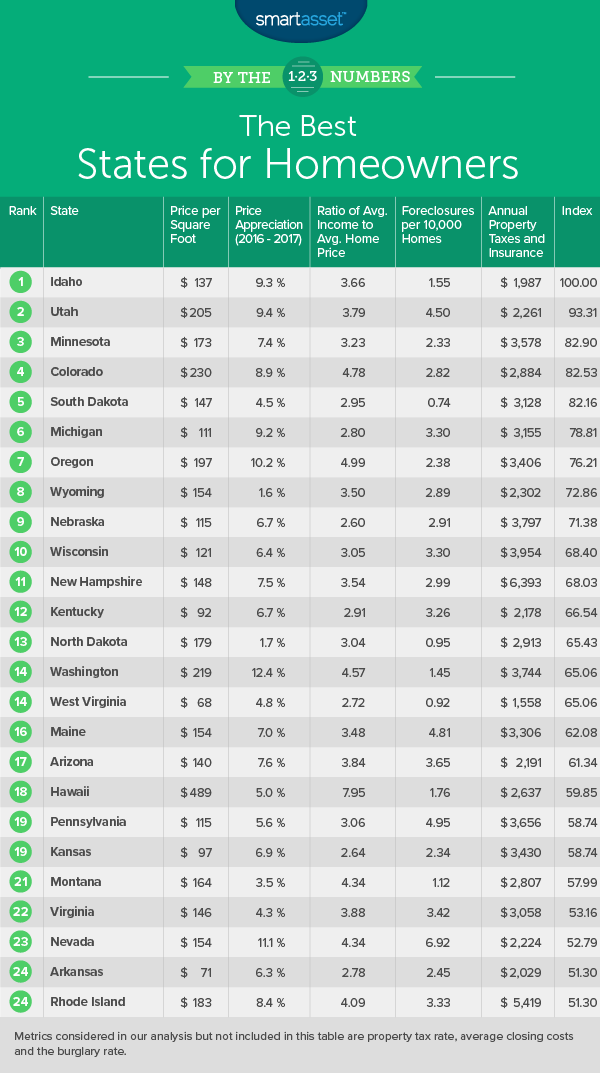 In order to rank the best states for homeowners, SmartAsset analyzed data for all states except Vermont due to a lack of data for that state. We used the following metrics to rank the states: