The Best Places to Trick-or-Treat in 2017 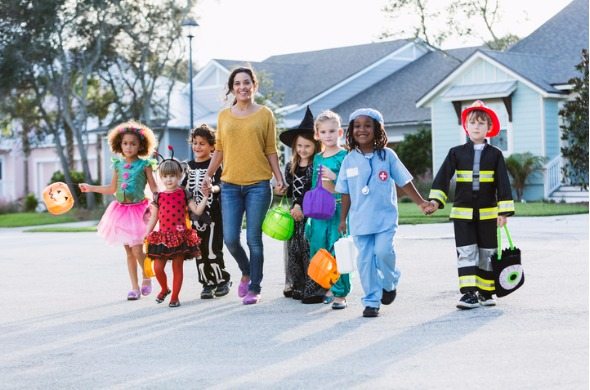 Just under 10% of Americans chose Halloween as their favorite holiday, according to a 2015 Harris Poll. The chance to dress up and eat candy is always a treat, especially for the younger generation. But not all places have the same trick-or-treating experience. Some places are better for maxing out how much candy you can get your hands on while others offer a safer environment. Below we rank the best places to trick-or-treat.

Looking to buy a home? Check out the latest mortgage rates.

In order to rank the best places to trick or treat, we looked at seven metrics. We looked at data for population density, percent of residents under the age of 15, home values, violent and property crime rates, precipitation and temperature. Check out our data and methodology below to see where we got our data and how we put it together.

This is the fourth annual study of the best places to trick-or-treat. Check out the 2016 study here. 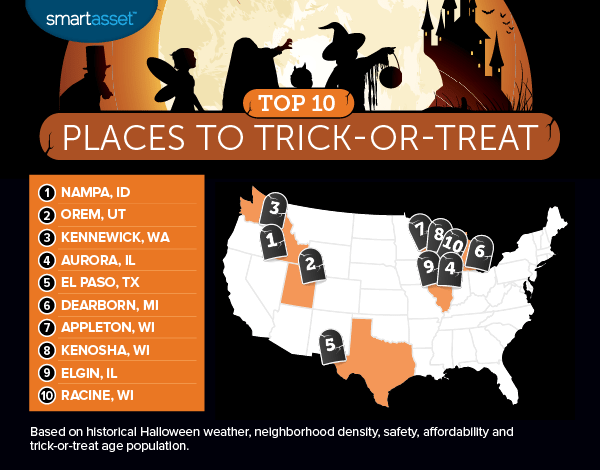 For the third year in a row, Nampa, Idaho is the best city to trick-or-treat. A deluge of rain can really put a damper on trick-or-treating festivities. Fortunately, in Nampa, Idaho there is almost no chance of that happening. Our data shows that on average it should rain in Nampa once every 167 Halloweens. For that metric, Nampa ranks second.

Just over 27% of Nampa’s population are children (under the age of 15) so they’ll be no shortage of companions as you trek from house to house.

For the second consecutive year, Orem, Utah is the second-best city to trick-or-treat. Another concern during Halloween, and being out late trick-or-treating, is safety. Orem has the lowest violent crime rate in the study and is in the top 20% for lowest property crime rate.

Plus, 26% of this city’s residents are under the age of 15. That means it’s full of trick-or-treating spirit and kids will have plenty of friends to trade their candy with.

Like in Nampa, there is little chance of rain ruining the trick-or-treating in Kennewick. Kennewick should also have a large contingent going trick-or-treating, over 25% of residents here are under the age of 15.

One concern may be housing density. Kennewick has the third-lowest single-family housing density in our top 10. This may mean you need to cover a lot of ground if you want to get all your favorite candy.

Aurora dropped one spot in last year’s analysis to fourth. This city is generally a safe place to trick-or-treat. According to our data, Aurora has a top 25% lowest violent crime rate and the seventh-lowest property crime rate in the study.

The city also stuck out as a relatively housing-dense place to trick-or-treat. That means running from house to house and filling up your bucket with candy will be a breeze.

El Paso is the second-most affordable place to trick-or-treat in our top 10. The median home is worth only $125,000. The Texas city also ranks well in crime. The property crime rate in El Paso is especially low. Ranking 20th, El Paso has a property crime rate of only 1,900 per 100,000 residents.

One concern however might be the heat. The average October day tops 69 degrees on average, so any costumes heavy on clothes may be a no-go in El Paso.

Dearborn dropped from fifth last year to sixth this year. This Detroit suburb located in eastern Michigan. It ranked highly in metrics like population density and percent of residents who are under 15. For each of those metrics Dearborn ranked in the top 10%.

One metric which may concern potential trick-or-treaters is the relatively high chance of rain. According to our data it rains around 7% of days in October in Dearborn.

Appleton has shot up our rankings this year. Last year, the city took 25th and this year it takes seventh. Appleton can point to a younger population (22% are under 15) and a declining property crime rate (1,671 crimes per 100,000 people) as explanations for why this city is a better place to trick-or-treat in 2017.

Perhaps the worry here is instead of candy residents may start giving out apples!

Elgin fell two spots from last year. Many of its scores were similar but there was a slight uptick in home value and a slight increase in violent crimes. But still this is a great place to trick-or-treat. Elgin has the lowest property crime rate in our study.

Plus, the average temperature around Halloween is 56 degrees Fahrenheit which is a nice, crisp temperature for trick-or-treating.

Racine is one of the best cities to get a sackful of candy. This city has the 14th-highest density of single-family homes, meaning there’s no need to walk long distances. Racine has the lowest median home value in the top 10, making it an affordable place for families to buy homes. The median home value in Racine is $106,100. 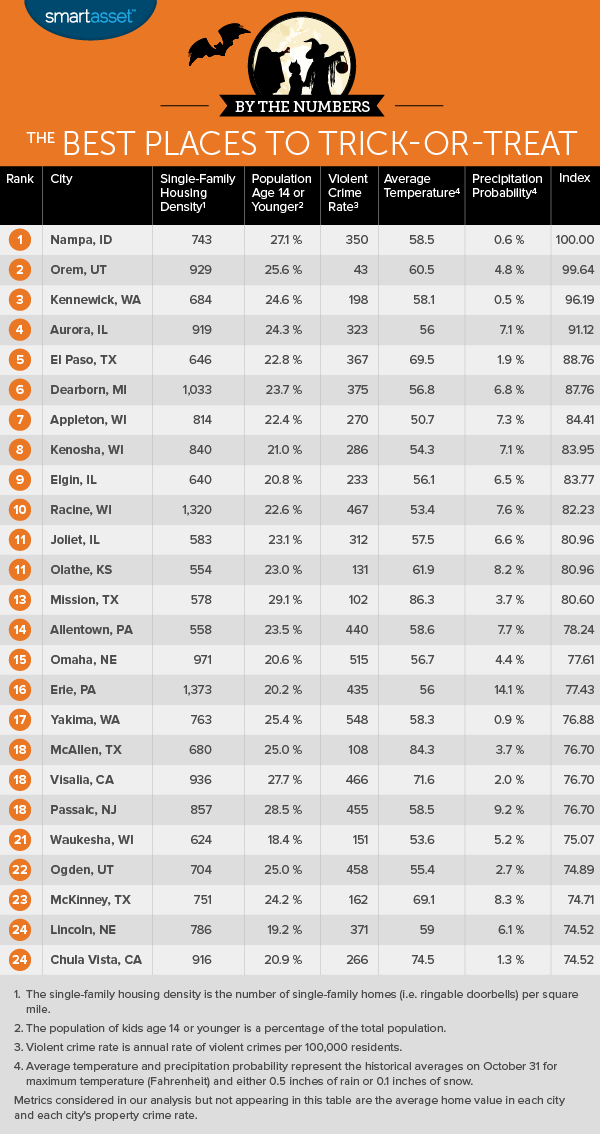 Tips for Saving on a Halloween Party

If you’re concerned about the costs of food and drinks, ask your guests to contribute some Halloween-themed snacks or chip in for drinks. By turning the party into a potluck, you can save big bucks and get your friends invested in your gathering.

As the host, we’re sure you’ll want to look your best. But a new costume can cost upwards of $100. One great option to save money is to simply make your own Halloween costume. There are plenty of DIY guides on the internet, plus you’ll amaze your friends with how crafty you are. If you’re not feeling up to the challenge, see if you can borrow an old costume from a friend or try to repurpose something in your closet.

Data analysis for this study was done by Nick Wallace.