The Best Places to Trick-or-Treat in 2015 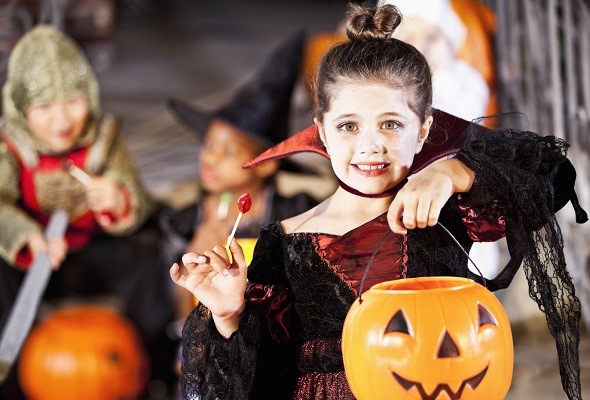 What’s the trick-or-treating like in your hometown? Do your neighbors hand out King Size Snickers – or carrot sticks? How are the costumes? Are the houses close together or do you have to walk a mile just to ring a doorbell?

And what about the weather? What are the odds it will rain this year? Any chance of snow? Will you (or your kids) have to wear a jacket under your Superman costume? These are important questions, especially for kids who have their eye on the prize: maximum candy collection.

This is the second annual study of the best places to trick-or-treat. Read the 2016 study here.

To find the best places to trick-or-treat, SmartAsset collected data on more than 300 of America’s largest cities. Our analysis placed a special emphasis on weather and safety. We looked at the average temperature and precipitation on October 31st, as well as crime rates in each city.

We also considered neighborhood density (more doorbells means more candy), affordability and the population percentage of children. Read more about our methodology below.

Buying a house? Find out how much you can afford to pay. 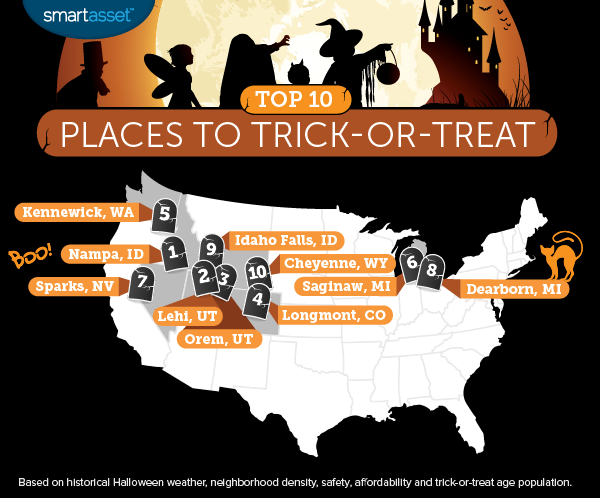 The country’s best trick-or-treating locale is Nampa, Idaho. This town of 80,000 has extremely safe streets and enjoys cool, dry autumns. Based on historical weather data, the chance of significant rain or snow on October 31st in Nampa is just 0.6%, while the average high on Halloween is 58.5 degrees. In other words, pretty perfect trick-or-treating conditions!

Before hitting the streets with your pillow-case or jack-o-lantern bucket, it’s essential to stop by Nampa’s Downtown Halloween. This annual Halloween festival features games, trick-or-treating at downtown businesses the grand finale: the Nampa costume contest.

According to the U.S. Census Bureau, an astonishing 39% of Lehi’s population is less than 15 years old. That means more trick-or-treaters and more Halloween spirit. To appease the masses of ghosts and zombies that wander its streets on the 31st, Levi hosts an annual Halloween Extravaganza featuring candy, storytelling, sloppy joes and a “spook-alley.”

Want to move to Lehi? Check out mortgage rates here.

Located in central Utah, Orem is among the safest cities in the entire country. Its violent crime rate is a fraction of the national average and the second lowest among the 317 cities in our study. Safety isn’t the only reason Orem is a great place to celebrate Halloween, however. Locals love Pumpkinland, which has a corn maze and kid-friendly “Light Alley,” in addition to a terrific pumpkin patch.

Situated beneath iconic Longs Peak in the Front Range of the Rocky Mountains, Longmont enjoys perfect fall weather for an evening of trick-or-treating. The average high temperature on October 31st is 60.6 degrees – not too cold, but with a bit of an autumn bite. This year, the town will hold its 39th annual Halloween Parade & Trick-or-Treat Street. Costumed kids of all ages (and stroller-pushing adults) march through Longmont before hitting up downtown storefronts for candy.

Rain can ruin a good Halloween, but that shouldn’t be a problem in Kennewick. Historically, the town has had wet Halloweens just 0.5% of the time. In other words, trick-or-treaters in Kennewick, which sits in the rain shadow of the Cascade Mountains, can expect to get soaked only once every 200 years.

This central Michigan town is the best place for trick-or-treating in the eastern U.S. The more than 1,050 single family homes per square mile means trick-or-treaters can spend less time walking between doors and focus on what matters: collecting candy. It also rated as the second most affordable city in our study so families of modest means can enjoy Halloween in Saginaw.

For those who want to get in a little early trick-or-treating, the Saginaw Zoo hosts Zoo Boo the two weekends prior to Halloween. Attractions are non-scary and include a pirate train, “spooktacular decorations” and somebody named “Doctor Slime.”

Situated just outside of Reno in the high desert of central Nevada, Sparks receives very little rain in October, or any other time of the year. That makes for dry conditions on Halloween. While the average high temperature on October 31st is just about perfect (63.4 degrees) trick-or-treaters should keep in mind that temperatures fall quickly after dark in the arid Nevada climate.

The second Michigan city to rank among the top ten best places to trick-or-treat, Dearborn rated especially well for its housing density. It is also home to one of the country’s best October traditions: Halloween in Greenfield Village. The historic village, which has over 80 different historic structures dating back as early as the 17th century, transforms into a spooky (but not scary) haunted town on the three weekends preceding Halloween.

Halloweens in Idaho Falls are a bit cooler than those in other top trick-or-treating destinations. The city has an average high on October 31st of 53.4 degrees, so by trick-or-treating time expect it to be chilly. On the other hand, Idaho Falls is quite safe, with crime rates well below national averages.

If you think Halloween should last a month, not just one day, Cheyenne may be the place for you. This year, events kicked off on September 19th with the Cheyenne Zombiefest, a festival held by the Cheyenne Little Theater celebrating all things zombie.

Of course, none of those events are what makes Cheyenne such a great place to trick-or-treat. The town rated well for its dry climate – it gets precipitation on Halloween just 0.8% of the time – and its low crime rates. 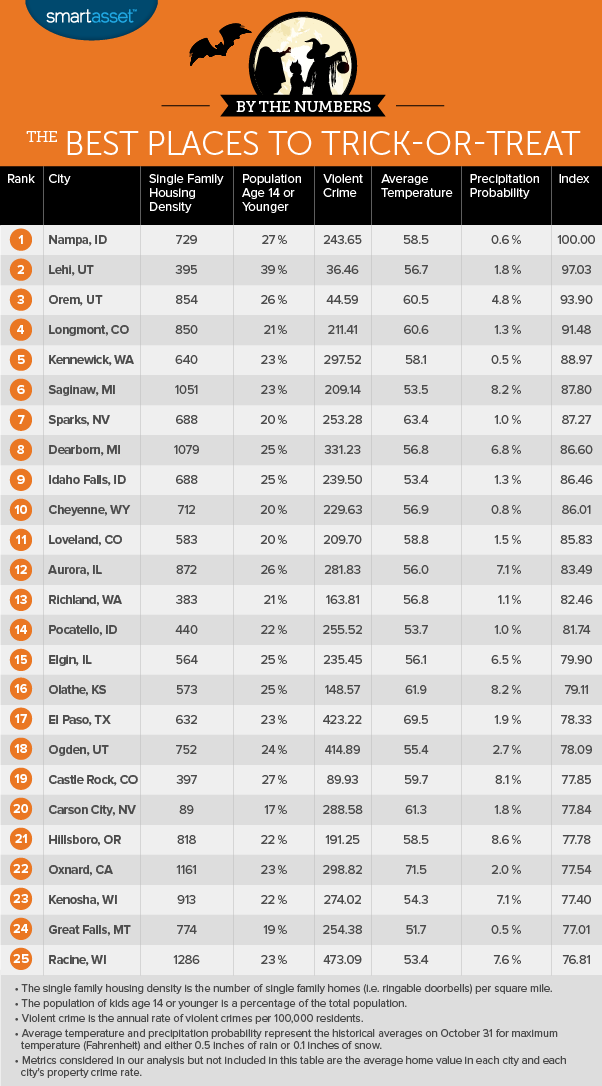 SmartAsset provides free, accurate, data-driven advice on important financial questions like How much house can I afford? and Is it better to rent or buy? We took the same analytical approach to find the best places to trick-or-treat.

We collected data on more than 300 of the largest cities in the U.S. Specifically, we considered the following seven metrics, emphasizing safety and weather.

To determine which places had the best environment for trick-or-treating, we found the number of standard deviations above or below the mean each city scored for each of these seven metrics. We then totaled those seven scores up to find the ranking for each city. Finally, we indexed those totals to 100. The city that rated highest above the mean across the seven metrics scored a perfect 100, with lower scores corresponding to lower totals.

Data on precipitation and temperature comes from the National Oceanic and Atmospheric Administration. Data on crime rates comes from the FBI’s Uniform Crime Reporting Database and local police department websites. Data on housing density, home values and the population percentage of children comes from the U.S. Census Bureau.

Read the 2016 version of this study here.