The Best Places for Green Jobs 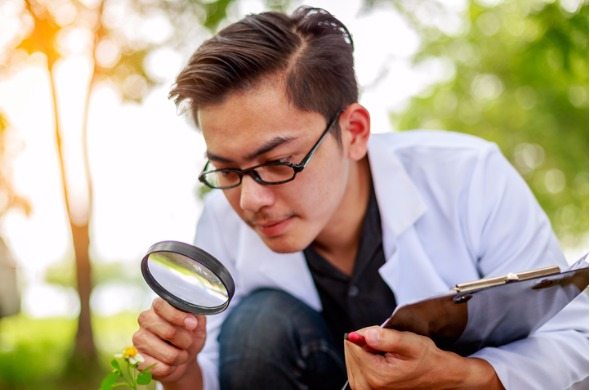 As the effects from climate change become more and more apparent, many Americans are wondering what they can do. For some that means recycling more or using less water. For others, it might mean attaching a solar panel to their homes, making their homes more affordable and helping the environment. Yet, another group takes it to the next level. They dedicate their professional lives to protecting the environment.

Looking to move? Check out the latest mortgage rates. 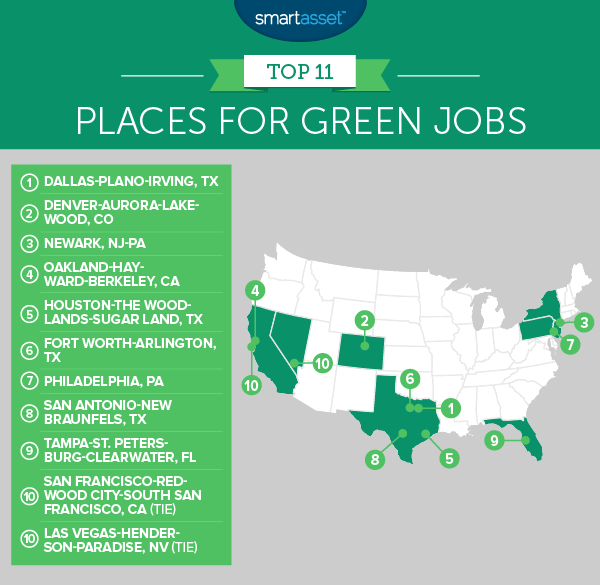 This metro area, according to the data, is the best one for green jobs. The average green sector employee earns over $83,000. That is over 60% more than the average worker in the area. Combine that with the low unemployment rate of 3.8% and you have a great area for working in the green industry.

The Denver area is known as a nature lover’s paradise, so it is no surprise to see that this area also offers plenty of opportunities to protect that environment. Just over 2.2% of all jobs here fall under the environmental protection category, the eighth-most in our study.

The average worker in one of those green jobs also earns over $83,500 per year. If you do move to this metro area, you shouldn’t be looking for a job for too long. Our data shows that the unemployment rate is only 3.1%.

Around 2.28% of all workers in the Newark metro area work in the green economy, according to BLS data. On average those workers are well compensated for their work. The average worker in green jobs around the Newark area earns over $90,000. For both of those metrics Newark ranks in the top 10.

The eastern portion of the Bay Area takes fourth. If you did want to move to Oakland-Hayward-Berkeley and work on protecting the environment, you would likely get paid well. The average green worker here earns just shy of $95,000 per year.

However given the Bay Area’s cost of living and California’s high tax rates, that income is needed. The median home around this metro area costs over $1,400 per month, which equals roughly 18.2% of the average green worker’s income. For both of those metrics, Oakland ranks below average.

Houston is known as being an energy hub, especially for oil. So this metro area ranking fifth may surprise some people. However, the green industry is pretty big around Houston, too. For example, there are about 1,250 environmental science and protection technicians in this metro area, one of the highest numbers in the study. Overall about 2.23% of workers here work in the green economy.

One big plus of living and working in this metro area is the relatively affordable homes. Our data shows that the average home costs about $956 per month.

Philadelphia pays its green workers quite a bit. The average green worker here earns $84,000 on average. That is 1.58 times as much as the citywide average.

Another plus to working around Philly is its relatively affordable housing. Buying a home should not have any green workers declaring bankruptcy. We estimate that the average green worker would only need to spend 13% of their income to cover the monthly cost of the average home.

Our fourth and final Texas city takes eighth. Working in the green industry in San Antonio-New Braunfels will leave you feeling rich, although you won’t be as wealthy as green workers in other cities. We estimate that the average green worker around San Antonio earns around $73,000 per year.

That is a relatively low figure when compared to green workers in other parts of the country, but compared to other San Antonio employees it’s quite a bit. We estimate that the average San Antonian working a green job earns 62% more than the area’s average income.

Florida is one of the state’s most vulnerable to any rise in sea level change so it is good to see a Florida metro area crack this top 11. In ninth is Tampa-St. Petersburg-Clearwater, Florida. Around 1.88% of workers here work in the green industry as classified by the O*NET database of occupational information.

The average green worker around Tampa earns $75,000, which is 65% more than the area’s average salary. For that metric, this metro area ranked third. Plus with Florida’s low income tax, $75,000 goes further here than it does in many other parts of the country.

Another Bay Area metro area comes in tied for 10th. Almost 2.4% of all workers here work in the environmental protection sector, the fifth-highest percentage in the country. In particular climate change analyst is a relatively popular profession in this metro area. BLS data shows there are about 1,200 of them in the San Francisco area.

San Francisco is also famous for its high salaries and high costs of living. This study is no different. San Francisco has the highest average salary for green workers ($100,716) and the second-highest median housing cost ($1,840).

Las Vegas takes the final spot in this top 11, coming in tied with San Francisco. Over 2.1% of workers here are employed in green jobs, which is a top 15 rate.

Tips for Being More Environmentally Conscious

Even if you do not work in a green job there are still ways to be environmentally conscious. Here are some money-saving tips for leading a greener life.

One of the biggest ways to save while helping the environment is to use a bicycle as your primary mode of transportation. You won’t have to pay for gas or auto insurance, plus you’ll stay in shape. In areas with extreme weather, however, biking can be difficult. In that case public transportation is your next best bet.

There are other small things you can do, as well, that don’t require changing your whole life. By turning off lights when you are not in the room or unplugging your appliances when you are not using them, you can save a little extra on electricity while helping the environment. Another tip is to set your thermostat to a slightly colder temperature in winter when you are out of the house or sleeping. The U.S. department of Energy says that turning your thermostat down 15 degrees at night can cut your energy bill down by 10%.

With that extra cash you can contribute more to your 401(k) and get a head start on saving for retirement or simply put it in your high-yield saving account as an emergency fund.