The Best Cities for Singles (Who Like Being Single) in 2017 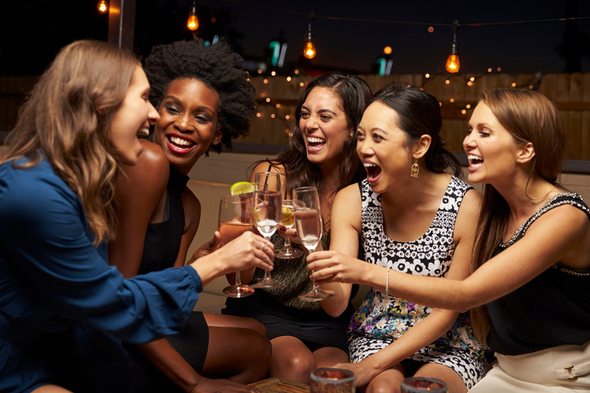 The marriage rate has declined over the past several decades and the median age of first marriages for women and men has climbed steadily in the past 50 years. While many people are postponing marriage or avoiding it altogether, walking down the aisle is still part of the American Dream. What’s more, being single by the time you reach a certain age is usually considered less than ideal.

This is SmartAsset’s second annual study of the best places for singles who like being single. Read the 2016 study here.

While being single is sometimes looked down upon, many people simply enjoy it. In honor of the folks who are perfectly happy flying solo, we ranked the best cities for singles who enjoy being independent.

To find the best cities for singles who like being single, SmartAsset pulled data from the U.S. Census Bureau. We ranked the 559 largest U.S. cities across five different metrics, including the marriage rate, the median monthly rent and the unemployment rate in each city. We looked at the number of local bars and entertainment establishments per 100,000 residents as well. These were the same metrics that we considered in the 2016 edition of our study.

For more on how we put this study together, read the data and methodology section below. 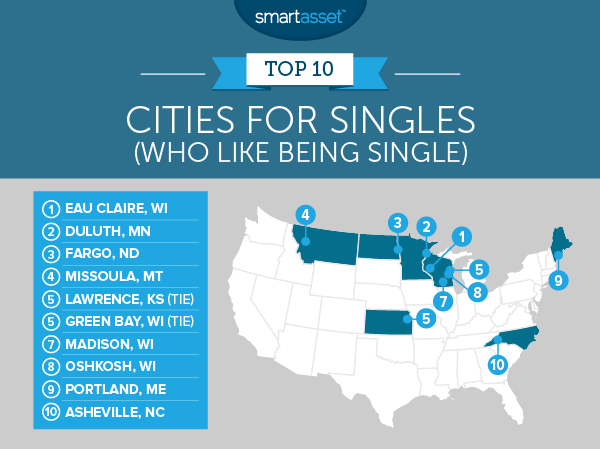 According to our analysis, Eau Claire could be the perfect place for singles who enjoy being single. Census data shows that 61% of the city’s population is unmarried. If most of your friends are single, there may be little to no pressure to tie the knot.

Eau Claire also has the lowest unemployment rate in our entire study: 1.8%. Since the city’s job market is so strong, singles who want to focus on their careers should have access to plenty of job opportunities.

Duluth, Minnesota is fairly affordable, particularly if you prefer renting over buying a house. The city’s median rent is just $664. That’s one reason why the city could be great for singles who want to stay single. When rental rates are low, there’s no need to find a roommate or get married in order to cut your housing costs in half.

Living the single life in Fargo might not be so bad, especially if your job is the most important part of your life. The city’s unemployment rate is only 2.6%, according to one-year estimates from the 2015 American Community Survey. Fargo also has a high percentage of residents who are not married (60%) and plenty of local entertainment establishments.

Related Article: 15 Things to Know Before Moving to Montana

If you’re single in Lawrence, Kansas, you’re in good company. Lawrence – which is the sixth-largest city in Kansas – has a marriage rate of just 35%. What’s more, it’s a fairly young city. Roughly 37% of the population falls between the ages of 20 and 34.

In 2016, Green Bay ranked as the 10th-most affordable city for renters in the United States. Median rent in the city is now only $566 and a typical resident spends roughly $8,772 per year on housing-related expenses. Singles in Green Bay who don’t have to spend a big chunk of their take-home pay on housing costs can afford to splurge on tickets to a Packers game or enjoy the local nightlife.

Based on our analysis, Madison could be a great place for folks who aren’t interested in being in a committed relationship. For every 100,000 residents, there are more than 60 entertainment establishments and more than 30 bars. Plus, 63% of the population is single. Hot spots for singles in Madison include the Tip Top Tavern and The Rigby, a pub in Downtown Madison.

There’s always something to do in Oshkosh. That’s why it’s known as Wisconsin’s event city. More than 1,000 events take place in Oshkosh every year, including Country USA, a music festival that brings the biggest stars to the city for five days in late June.

For singles who like being single, there’s no shortage of options for entertainment. There are more than 50 bars for every 100,000 residents and lots of fun things to do on weeknights and weekends.

Singles who are avid beer drinkers will love living in Portland. The city ranked as one of the best cities for beer drinkers in both 2015 and 2016. Census Bureau data reveals that there are more than 29 bars per 100,000 people.

Not into beer? No worries. There are about 91 entertainment establishments for every 100,000 residents. And while there are fewer people per square mile in Portland than there are in cities like New York and Boston, you’ll probably find many other singles who share your tastes and interests. There are roughly 66,872 people who live in Portland and 60% of its adult population isn’t married.

Most of the adults in Asheville are single. In fact, its marriage rate is only 42%. If you have no one to come home to, you won’t have to feel bad about spending all your free time with your besties. And if you’re looking for new places to hang out, you’ll have a number of spots to choose from. There are more than 80 entertainment establishments for every 100,000 residents and tons of bars. 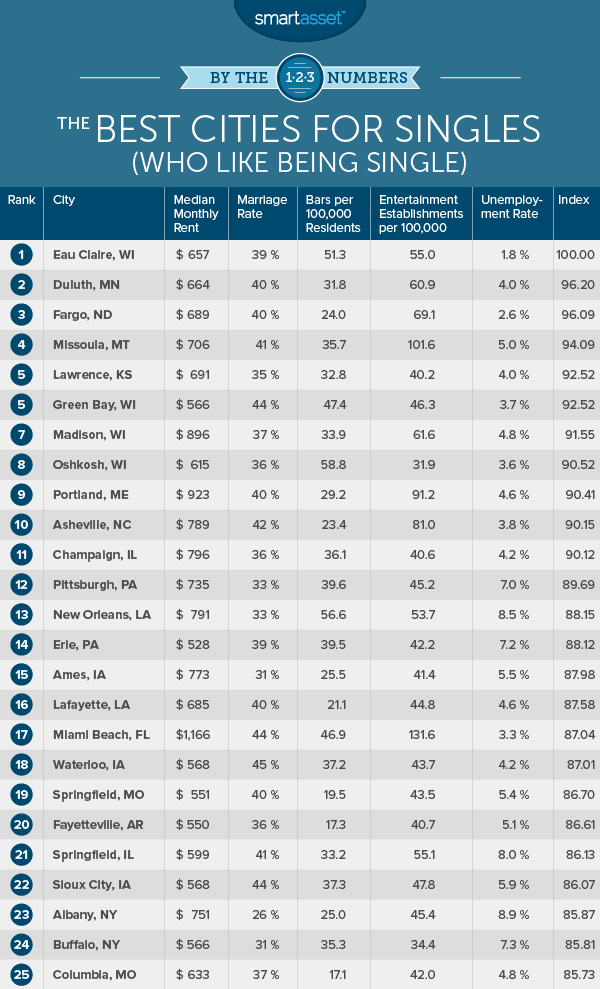 Our study ranks the 559 largest cities in the country across the following five metrics: