The Best Cities for Vegans 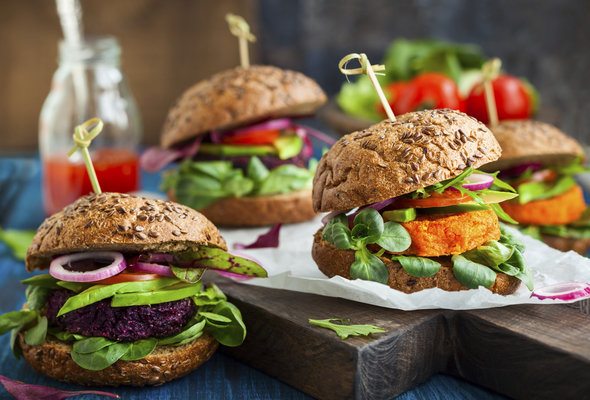 Almost 2 out of every 3 Americans are overweight or obese, according to data from the 2009-2010 National Health and Nutrition Examination Survey. While the science behind dieting and obesity is not completely understood, one thing nearly everyone agrees on is that when it comes to vegetables, more is better. Americans on average seem to be heeding this message. Data shows that Americans have been eating less and less meat every year since 2004.

However, the reasons one becomes a vegan (someone who does not eat any animal products) are not just dietary. Some people do it because of concerns about factory farms and mistreatment of animals in the meat production process. Some become vegan because of the impact raising animals for consumption has on the environment. For some people it’s something else altogether or a combination of a few reasons.

We at SmartAsset were curious to see which cities were adapting to this change in food preferences. In order to come up with a ranking for best cities for vegans we looked at the number of vegan-friendly restaurants, reviews of vegan-friendly restaurants, number of farmers markets, population and cost of living. To see a full breakdown of where SmartAsset got the data and how SmartAsset calculated the index, please see the data and methodology section below.

Mix of the usual suspects and some surprises. It probably comes as no surprise that cities like Vancouver, Portland and Los Angeles show up in our top 10. But Norman, OK and Cape Coral, FL may be a bit more of a surprise.

People like vegan food. There seems to be an appreciation for vegan food all across America. The average Yelp rating across all the cities in our study for vegan-friendly restaurants is 3.9. (Although, of course, it may just be that people who love vegan food are the ones rating vegan-friendly places.) 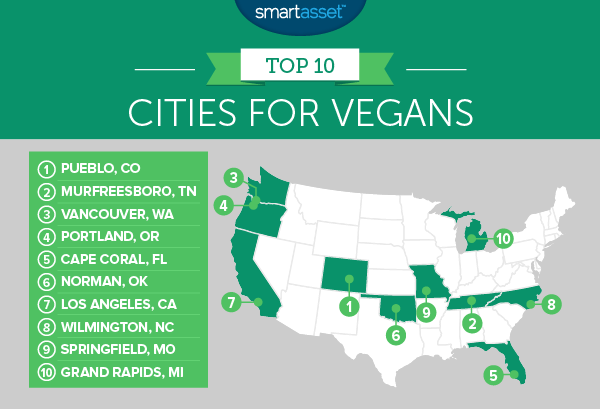 Home to the Colorado State Fair, Pueblo combines a low cost of living and high average rating of vegan-friendly restaurants to make for a great place for vegan residents or vegan tourists. Locals love The Daily Grind Cafe (4.0 stars out of 5 on Yelp), so if you are a vegan who is visiting be sure to check it out. One area Pueblo scores relatively poorly is in vegan-friendly places per resident. It ranks only 35th in that category with 4.9 vegan-friendly places per 10,000 residents.

Murfreesboro is the fastest-growing city in Tennessee and, according to our data, one of the most vegan-friendly cities in the country. Murfreesboro like Pueblo has a low cost of living, but has a much higher number of vegan-friendly places per 10,000 residents at 9.2. The people of Murfreesboro seem to like the Juice Bar Murfreesboro, which is a juice bar chain and may be a good place to re-hydrate for vegans visiting Middle Tennessee State University.

Originally a fur trading post, Vancouver is now (rather ironically) one of the most vegan friendly cities in the U.S. For the vegan pizza lovers out there, Vancouver Pizza Company may be well worth a visit. They offer vegan pizza options as well as gluten-free pizza for the celiac disease-sufferers and gluten-intolerants among us. Even if you’re a vegan but not a pizza lover, Vancouver will likely still have something tasty for you. Vancouver has 40 vegan-friendly places per 10,000 residents with an average rating of 4.05.

Related Article: What Is the True Cost of Living in Portland, Oregon?

For the vegans embracing Portland’s high cost of living and looking for a food experience rather than a meal, Farm Spirit may be the place to check out. It has a 5-star rating on Yelp. You will need to reserve a ticket however and those range from $60-$80. For the money conscious vegans, look out for The Loving Hut and The Bye and Bye. Both spots are relatively cheap and well regarded.

Florida certainly isn’t considered a traditional vegan hot-spot but according to our data Cape Coral should be on any vegan’s list of potential places to move. Two restaurants in particular stand out: Loving Hut and Café You. One Yelp reviewer recommended the falafel and hummus at Café You.

Other than those two places, Cape Coral’s vegan-friendly places have an average rating of 4.15. That is good enough for 11th in our study. One concern for the vegan chefs of Cape Coral, data suggests there are only 2 USDA registered farmer’s markets in the city.

According to Yelp there are 97 vegan-friendly restaurants in Norman. With a population of 115,000, this means there are around 8.4 vegan places per 10,000 residents. The vegan-friendly places also have an average rating of 4.125. That makes Norman the 12th best city in that category. According to those in the know (Yelp reviewers) The Earth Café and Deli is a good spot for vegan-friendly food options.

The largest city in the top 10 in terms of population and number one in total vegan-friendly places, it is probably no surprise to see Los Angeles do well in this study. But like Portland, Los Angeles has to overcome a terrible cost of living score (in this case of 136) to climb into the top 10. According to Yelp there are tons of great vegan-friendly places (though not all have pokestops nearby!). For the trainers looking to eat healthy while they catch ‘em all, My Vegan Gold or The Vegan Joint may be the best options, as they have pokestops nearby.

Related Article: 17 Things to Know About Moving to Los Angeles

Wilmington, North Carolina, or 7th best city for beer drinkers as we call it, is home to the second most farmer’s markets per capita of any city in the U.S. Wilmington has 10 USDA registered farmers markets. This means there are .53 per 10,000 residents.

But vegans in Wilmington will likely need to learn know how to prepare their farmers market produce because there are only 2.6 vegan-friendly restaurants per 10,000 residents. That was only good enough for 60th in our study on that factor. According to Yelp reviewers, Lovey’s Natural Foods and Café is a good spot for both groceries and eating out, albeit a little pricey.

Springfield, Missouri can thank its top ten ranking to its very highly-rated vegan restaurants (4.2 on average for 3rd in our study for that factor) and its low cost of living (88 for 5th in our study on that factor). If only there were more vegan-friendly places, the city would rank even higher. Springfield has the lowest number of vegan-friendly places per 10,000 residents of any city in the top 10. With 1.17, it ranked 97th in our study on that factor. For vegans who are fans of Latin American food, and Peruvian in particular, check out Café Cusco. 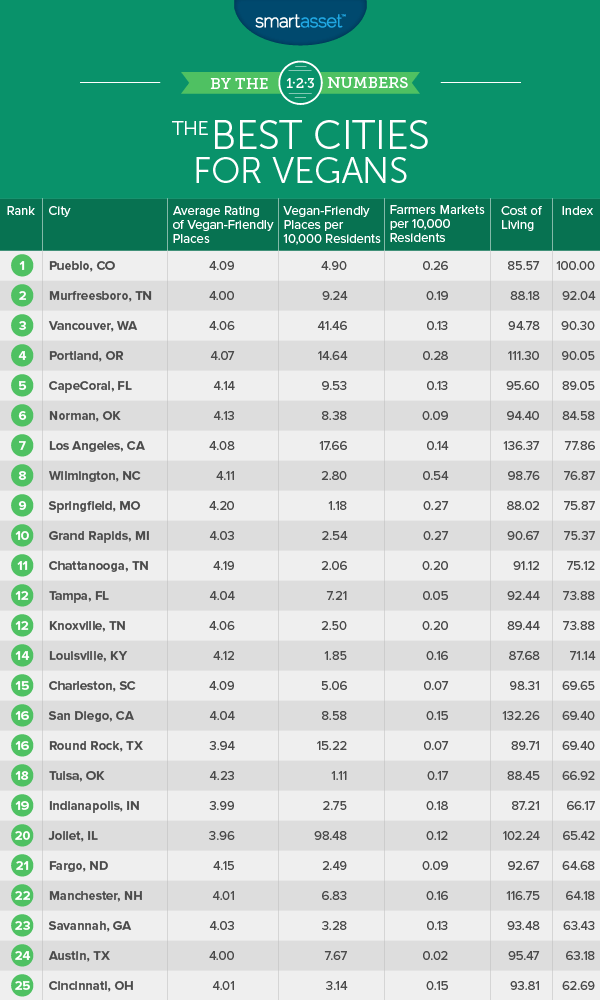 To find America’s best cities for vegans, SmartAsset gathered data on 108 U.S. cities. SmartAsset then looked at the following four different metrics of vegan food availability, quality and price in each city to create our index.

Cost of living. Data provided by the U.S. Census Bureau. 100 is the national average.

We ranked each city according to those four metrics. We then averaged those rankings, giving full weight to average rating of vegan places and number of vegan places, then half weight to cost of living and farmers markets. We calculated an overall index score based on those averages. The city with the best overall average received a 100 and the city with the worst average received a 0.