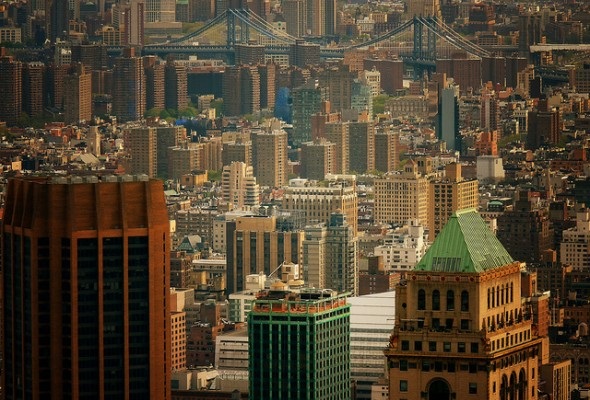 A well-known real estate truism is that housing prices in America’s biggest cities are much higher than the national average. New Yorkers, for example, often complain that thousands of dollars a month in rent only gets them a tiny one-bedroom apartment, especially in Manhattan, and one might assume that’s the case for every major metropolitan area across the country. According to recent census data, it does hold true that it’s expensive to buy or rent a home in the city – but there isn’t one monolithic real estate climate across the country, and each city has a separate economy and demography, so there are some surprising differences in how much it costs to live from city to city.

Related: Is it Better to Buy or Rent?

The Rent is Too Damn High

The average monthly rent in the US overall comes to $1231, which figures to a comfortable 28 percent of an average month’s pay. A theoretically fair percentage is 33 percent; much more than a third of your paycheck going to rent means cutting into other vital expenses, for your physical health (food, toiletries), long term goals (retirement savings, emergency fund) and your sanity (recreation and entertainment). As expected, city dwellers do pay through the nose for rent; but residents of certain metropolises are committing a much higher percentage of their income to housing than others are. 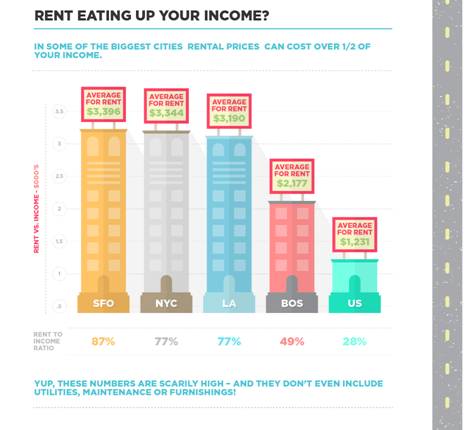 On the low end, residents of Boston pay $2177 a month for rent on average, which eats up about half their paychecks, or almost twice the national average. But on the opposite side of the country, San Franciscans are paying almost twice that percentage, with an average $3396 monthly rent that is 87 percent the average monthly income.

New Yorkers, meanwhile, pay close to what San Francisco residents do, at $3344 a month for rent, but this represents only 77 percent of a month’s pay, and those who live in Los Angeles get by paying $3190, also a 77 percent cut of the paycheck. It may be hard to imagine how to live on what little income is left, especially since these figures are purely for rent, and don’t even count the cost of utilities.

Related Article: 5 Places to Live if You are Young, Broke and Single in the North

Such is the price to pay for easy access to city amenities, like Broadway theater and Mission District dining, which don’t come cheap themselves – Boston’s 2010 census cost-of-living index was 132 percent of the national average, San Francisco paid 164 percent of average prices, New York had staggering 216 percent greater prices for the necessities, and Los Angeles got away relatively inexpensively at 136 percent.

In other words, San Franciscans have only about a tenth rather than two-thirds of their income to spend outside of their housing, or six times less than the average, and that money only goes two-thirds as far as it does on average.

If rent is so punishingly expensive, it may make sense in the long run to own a home. But there are some surprising costs to buying as well. One of the first barriers to entry to homeownership can be making a down payment. Fortunately, LendingTree reports that average down payments have fallen by 9.4 percent from 2011 to 2013, and fewer and fewer lenders are expecting the traditional 20 percent of cost up front.

Unfortunately for city dwellers, the same study found that the average down payments in the states that contain the Boston, San Francisco, New York, and Los Angeles metropolitan areas are still close to 20 percent. Massachusetts residents have to put down 18.3 percent on average. This works out to about $53,985 of the average sale price of $295,000. New York residents put down 19 percent, which means a potential homebuyer looking at a home with the average sale price of $370,000 would need $70,300 up front.  Californians put down 19.1 percent (about $66,850 for the average sale price of $350,000). Escaping to outlying areas and commuting to work may be just as an expensive route to start as well – New York City’s suburbs in New Jersey have the highest average down payments in the country, at 20.5 percent.

Related Article: What is the Typical Down Payment on a Home Purchase?

So how do you really know if buying a home puts your money to better use than renting? Generally speaking, it’s fine to rent if you know you’re only going to live in your current residence for the short term – if you’re going to school in the city and moving elsewhere when you graduate, say – but settling down makes buying the better deal. In numerical terms, though you can look at the price-to-rent index, or the ratio of the purchase price of a home to a year’s rent. Effectively, buying pays off after living in a home for a number of years equal to its price-to-rent index. And it’s in this respect that America’s cities are truly all over the place. 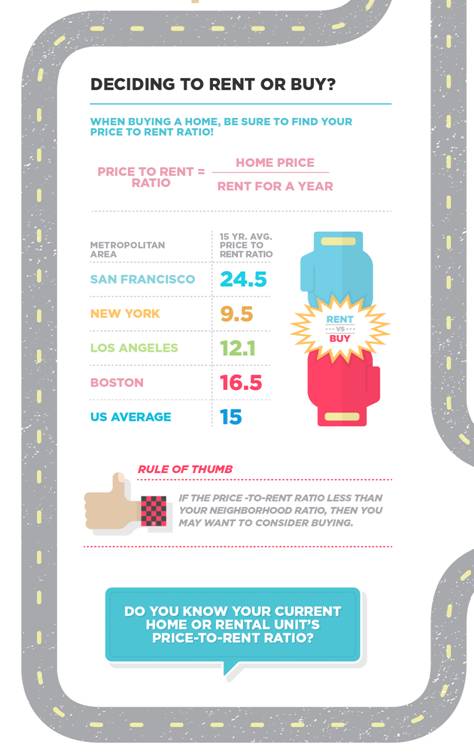 The national average price-to-rent index is 15. The lower the ratio, the smaller the difference between rental and owning costs per year. This means, the lower the price-to-rent index, the more likely buying a home is the better decision. The higher the number, the more it makes sense to rent. When a potential homebuyer looks in New York City, for example, it makes sense to buy a home with a price-to-rent index lower than 9.5 since 9.5 is the average ratio in the city. So if you have the funds and are planning to spend a long time savoring your bites from the Big Apple, buying may be the way to go – if you can find an apartment that rents for say $3344 a month that you can buy for around $380,000 or less.

Potential homeowners in Los Angeles also must beat the national average. In order for buying to be a good idea in that city, one must find a home with a price-to-rent index lower than 12.1.  For Bostonians that number is slightly higher, at 16.5.

The price-to-rent index of the average SF home is 24.5, which approaches twice the national average. This means that if you have found an apartment that rents for that same $3344 a month, it makes sense to buy if it costs less than $980,000. It’s possible to partially point to the expansion of Silicon Valley tech firms into the Bay Area to explain this one: San Francisco is undergoing what some analysts are calling a localized real estate bubble, as it has roughly once a decade for thirty years.

Related Article: Rent vs Buy: 6 Examples to Help You Decide

Speaking of bubbles, buying a house is a much safer bet today than it was a few years ago: the last national housing speculation boom had urban price-to-rent indices that were 75 percent higher than historical rates. Almost everywhere has now stabilized to numbers similar to 1987’s ratios.

Favorable price-to-rent ratios notwithstanding, even cities like New York and Los Angeles have low homeownership rates compared to the rest of the country. While 66 percent of homes in the US are owned rather than rented, New York, San Francisco, Boston, and Los Angeles each have around 30 percent homeownership rates. High costs aren’t the only reason for this; not everyone goes to the city to stay. Big cities are often college towns – New York alone has 81 institutes of higher education and counts 594,000 students – and living off-campus is an attractive option at city schools that are surrounded by culture, arts, and nightlife.

While in general major cities have very different real estate markets than the rest of the country, they are not all the same either. The analysis of rent to income ratio and price-to-rent index shows just how different the climate is in San Francisco, New York, Boston and Los Angeles. And the situations on the ground in these, four of the biggest cities in the country, are changing.

The firm Paragon Realty reports, for example, that San Francisco’s new home construction is “soaring dramatically,” which upends the typical city real estate problem of fixed supply (because there usually isn’t anywhere else to build). Expansionism like this is not the only way city real estate might become more affordable – Trulia has reported plummeting rents in New York’s “trendy” Garment District and Chelsea neighborhoods in recent weeks.

The object lessons here can be summed up as a restatement of the old law of real estate: “location, location, location.” This means making decisions beyond “do I want to live in a city,” and considering what the buy-versus-rent climate looks like within each particular city.

Note: Moven created and provided the infographic for this story. See the full infographic below. This article is part of a series with Moven and Renthop to increase discussion on personal finance and housing. For more on this topic listen to the Breaking Banks radio show airing this Thursday at 3pm on VoiceAmerica.