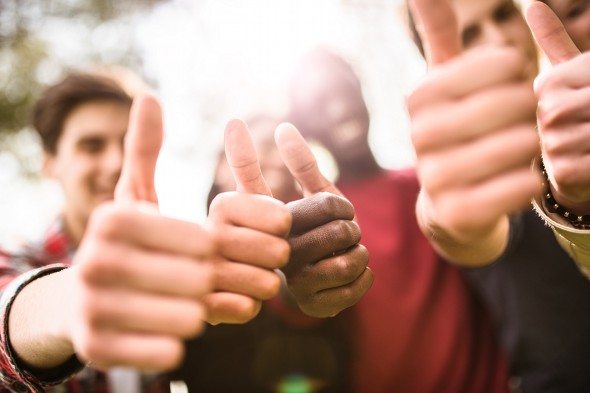 The U.S. routinely ranks among the world’s most charitable countries. In the 2015 Charities Aid Foundation World Giving Index, the U.S. came in second (to Myanmar). But which states do the most to uphold America’s reputation for generosity? SmartAsset crunched the numbers to find the most charitable states. 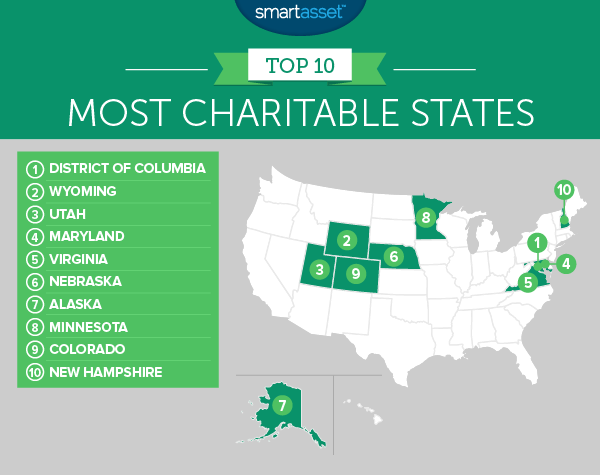 The most charitable state in the Union isn’t actually a state. Washington, D.C. ranked highest in our study, in part due to the high number of non-profits headquartered there.

The median charitable contribution in D.C. is $3,734. That’s not the highest in our study, but D.C. boasts some big-ticket donors. According to the Chronicle of Philanthropy, 2015 saw 11 charitable gifts of a million dollars or more from D.C. residents.

Related Article: The True Cost of Living in Washington, D.C.

The nation’s least populous state is doing its part to uphold America’s reputation for a charitable disposition. It’s also one of the best states for an early retirement, in part because it lacks a state income tax.

As a state famous for a high proportion of religious residents who tithe, Utah frequently ranks high on lists of the most charitable states. Our study found that the Beehive State has deducted contributions per thousand people of $1,122.55.

Though it has the lowest number of non-profits per 10,000 in our study, it makes up for that with a high value of volunteer time per capita and the highest median contribution of the all the states ($6,128).

The spirit of generosity comes from the top. The state government administers the Maryland Charity Campaign (MCC), which lets state employees make tax-deductible charitable donations through their payroll deductions, like you would make contributions to a 401(k). Nearly 700 charities participate in the MCC.

Like Maryland, Virginia has a program that makes it easy for state employees to give to charities. It’s called the Commonwealth of Virginia Campaign (CVC) and according to the program’s website, “Since 1997, employees have donated more than $31.8 million to participating non-profit organizations through CVC.”

Don’t know much about Nebraska? Well now you know that it’s one of the most charitable states in the country, with $589.63 in charitable contributions per thousand residents. The median contribution in the state is $3,111.

There are 64.8 non-profits per 10,000 and volunteer time in the state is valued at $676.51 per capita. It’s another state that facilitates charitable giving among state employees. Between 2003 and 2014 the Nebraska Charitable Giving Campaign raised more than $4 million for over 400 Nebraska charities.

The Alaska SHARE Campaign lets state employees make charitable contributions through payroll deductions. That program, under one name or another, has been around for as long as Alaska has been a state.

There’s also a program that lets all Alaskans donate to charity a portion of their Permanent Fund Dividend (the check Alaskans get from the investment earnings of a bit pot of the state’s oil money).

Federally itemized contributions per thousand in Minnesota are $631.61 while the median charitable contribution in the state is $2,679. There are 60.1 non-profits per 10,000 and volunteer time per capita is worth $701.47.

Colorado also allows people who don’t itemize their income tax deductions (i.e. those of us who take the standard deduction) to deduct charitable donations from their state income taxes. Contributions per thousand in Colorado are $625.23 and volunteer time in the state is valued at $777.52 per capita. There are 49.6 non-profits per 10,000 and the median contribution in the state is $2,958.

Charitable contributions per thousand in New Hampshire are the second-highest in our study, at $1,155.33. Volunteer time in the state is worth $657.10 per capita and there are 57.2 non-profits per 10,000. The median charitable contribution in the Granite State is $2,053. 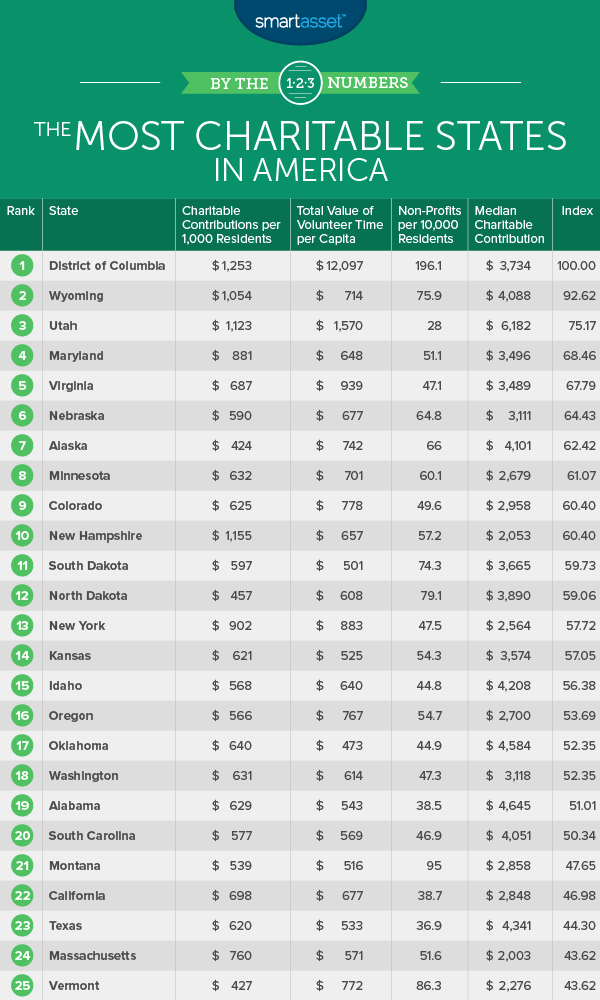 Once we had gathered the data on each of the four metrics for all 50 states and the District of Columbia we ranked each state on each factor, giving equal weight to the four factors. For all of the factors a bigger number helped a state rank higher. We then averaged the four ranks for each state state to get an average rank, which we used to create our top ten map and top 25 table.