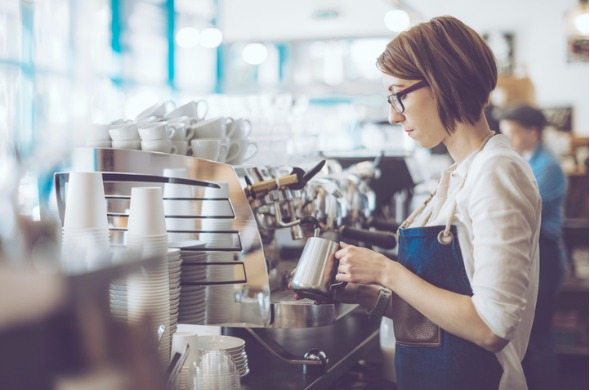 There are 2.6 million workers in the United States who are paid at or below the federal minimum wage, according to the BLS. About half of these workers are over the age of 25, including adults who support themselves and their families on the minimum wage. What happens when minimum wage workers want to buy a home? In some cities, high home values and low minimum wages may make this almost impossible.

In the market for a new home? Check out current mortgage rates.

Below we calculate how long it would take the average minimum wage worker in America’s largest cities to save up for a down payment on the average home. To do this we compared minimum wages and median home values. Check out our data and methodology section to see where we got our data and how we put it together. 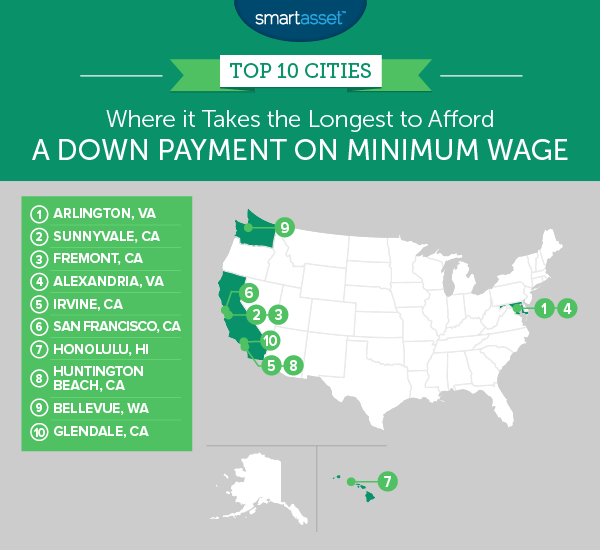 Minimum wage earners in Arlington, brace yourselves. Our data shows that the average Arlington minimum wage worker would need to save for almost 90 years before they could afford a 20% down payment on the average Arlington home. (This is assuming workers save 10% of their annual income each year toward the down payment.) Given the high costs of living in Arlington, saving any more than 10% of annual income may be next to impossible for minimum wage earners.

And it would take over 400 years of saving 10% of minimum wages in Sunnyvale to be able to buy the average home in cash!

The minimum wage in Fremont is about $3.25 more than the federal minimum wage of $7.25. This means that minimum wage workers here could earn about $21,840 annually by working full time.

If they saved 10% of that sum per year toward a down payment on the typical Fremont home, they would need to save for just over 80 years. Keep in mind the average life span of an American is 78 years.

A 20% down payment on the average Alexandria home is over $115,700. By saving 10% of income per year, a minimum wage worker would hit that down payment figure in just under 77 years.

Another California city, this time one in the Los Angeles metro area, ranks fifth. Minimum wage workers in Irvine earn $10.50 per hour. The median home is worth $806,000. It would take a minimum wage employee 73 years to save a 20% down payment on the average home.

Seeing San Francisco on this list is not surprising. In fact the reason it doesn’t rank higher is that minimum wage workers in SF earn more than their counterparts in many other cities. The minimum wage in San Francisco is $14 per hour – the highest in the top 10.

Of course, even with that relatively high wage, buying real estate in the City by the Bay is largely out of reach for the typical minimum wage worker. We estimate that a SF minimum wage employee would have enough for a median home down payment in 70 years.

Honolulu has the second-lowest minimum wage in our top 10. Combine that with high median home values and you have a city where minimum wage workers are largely priced out of the home-buying market.

Huntington Beach, a city located close to Irvine, takes eighth. While owning a home along this idyllic beach is a dream for many, for the area’s minimum wage workers it’s largely a fantasy.

We estimate the average California minimum wage worker would need to save for 66.4 years to afford a down payment on the average Huntington Beach home. And if they wanted to buy the property outright? That would take over 300 years’ worth of savings.

Bellevue is another relatively progressive city with an $11 per hour minimum wage. Unfortunately for minimum wage earners, the typical Bellevue home is worth more than $756,000. That means a 20% down payment would cost just over $151,000. It would take a minimum wage worker in Bellevue 66 years to save enough to afford that down payment.

Our list ends in Glendale. Glendale homes are expensive. It would take 65 years of saving for a minimum wage earner to afford a down payment on the average home.

One silver lining for California home buyers – minimum wage earners or otherwise – is that mortgage rates in California are below the national average. This makes homes in Glendale slightly more affordable than their sticker price initially suggests. 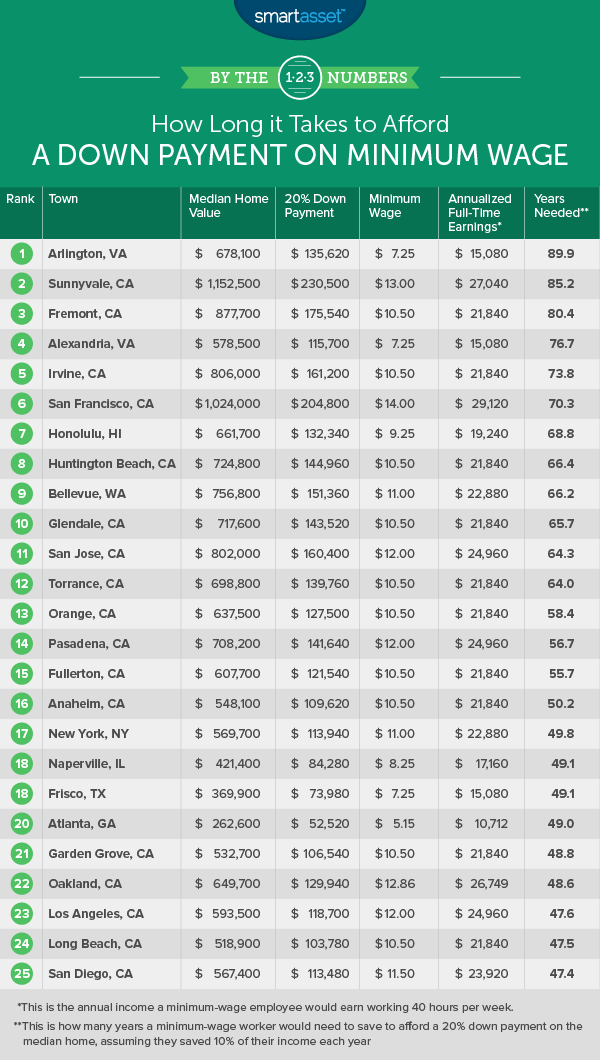 In order to see how long it takes to afford a down payment on the minimum wage, SmartAsset analyzed data for 200 cities. Specifically, we looked at data for the following four factors:

First, we measured the annualized earnings a minimum wage worker could expect to earn if they work full time. To do this, we multiplied the minimum wage in each city by 2,040. (2,040 is 40 hours per week x 52 weeks per year.)

We then found how much workers might expect to save by multiplying their annual earnings by 10%. After, we divided the sum of a 20% down payment on the median home by estimated annual savings to determine how many years it would take to afford that down payment. Finally we ranked the cities from the longest time it would take to the shortest.

Tips for Saving for a Down Payment

After deciding how much you want to save each month to hit your savings goal, you’ll need to take a look at your budget. Are there places where you can cut back on spending? Maybe you eat out once a week or buy new clothes once a month. Sacrificing those luxuries could help you reach your goal faster. You may also decide to put your tax return into a high-yield savings account as a way to squirrel away more funds.

If you think you will need to save for a long time, it’s best to put your funds somewhere easily accessible but where they can earn interest. Certain savings accounts have pretty high rates of return. Another option is to put your money in a certificate of deposit.