Which World Cup Teams Got the Best Return on Investment? 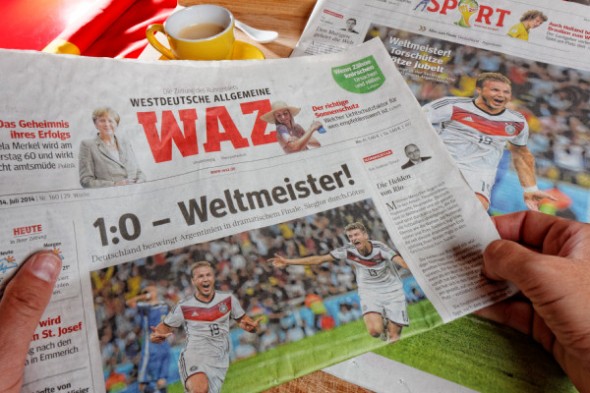 With Germany’s victory this past Sunday, the World Cup ended. Instead of suffer silently in withdrawal, we have decided to obsess just a little more. We want to look back at the triumphs and defeats of both favorite and underdog teams in the tournament.

Certainly, everyone wanted their own team to win, and because of that everyone but the Germans wound up a little disappointed. Then again, some countries were always expected to do much better than others.  So for some teams making it out of the group stage, or even winning a single game in that group stage represented a kind of success.

Measuring ROI in the World Cup

Assuming a team’s power comes from strong players, and the strongest players should – ideally – be the best paid ones, SmartAsset sought to calculate each national team’s return on investment based on its total market value and World Cup 2014 record.

A player’s FIFA market value is a function primarily of their salary, adjusted for their age (i.e. the number of good playing years they have left), record and demand among club teams wishing to acquire them. We used TheScore.com’s compilation of the total market values of each of the thirty-two World Cup teams to rank each team from most expensive (Brazil at $718,299,900 USD) to least (Honduras at $45,053,928 USD).

Watching at Work: The Cost of the World Cup

In the ideal everyone-gets-what-they-pay-for world, the team that’s higher up in this ranking (or has the highest market value) wins each match-up. So we charted out theoretical group and knockout round brackets using these results (which had the extremely counterfactual outcome of Brazil beating Spain in the finals, although Argentina and Germany did compete in this scenario – for third place).

We divided the actual number of wins – or, in the group round, ties, since those can still help a team advance – the teams picked up by the number they were expected to win in that ideal scenario we created. Each team got one free win-point on the outset since just getting to the world stage for the tournament is its own accomplishment. These ratios are the teams’ return on investment. To put it another way, the ratio indicates the degree to which each team over- or under-performed during the 2014 World Cup. 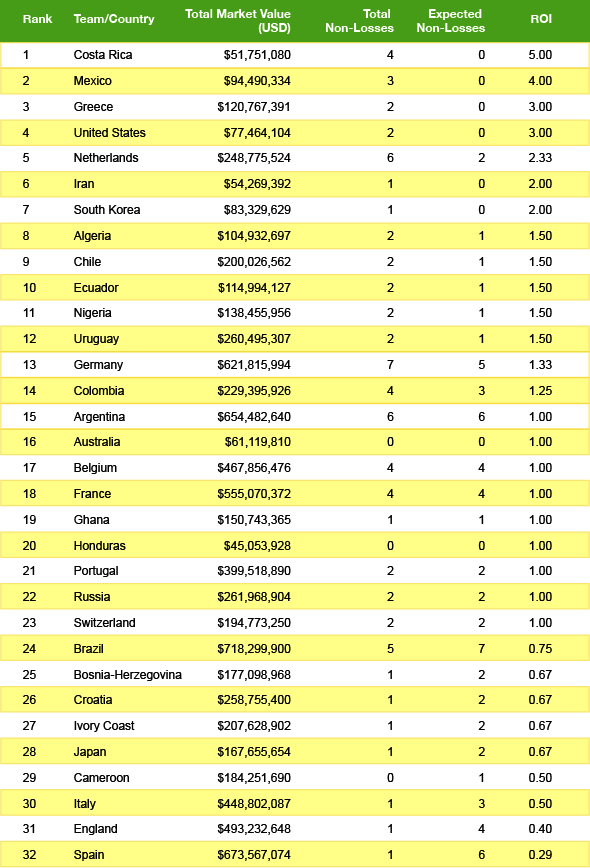 The Best Return on Investment

The team that got more than its money’s worth by far, and that outperformed our theoretical bracket by the most, was Central America’s tiny Costa Rica. “Los Ticos” had the second-lowest total market value of all the teams in the tournament at $51,751,080 USD. Hence, our market value prediction had them beaten by all of the other teams in their group, not even advancing to the knockout stages. But in reality Costa Rica picked up two wins and a tie to become the top team in their group. They went on to beat Greece in the round of sixteen before falling to the Netherlands’ powerhouse team in the quarterfinals in a narrow penalty-shootout loss.

Mexico had the second-best return on investment. “El Tricolor” held its own in a group against teams like Brazil and Croatia, which have much better FIFA international performance rankings. Mexico even fought Brazil (who were, for much of the tournament, the top-ranked team in the world) to a nil-nil tie. Though they were beaten by (again) the Netherlands, no Mexico fan will soon forget the gritty heroics of the likes of hyperagile goalkeeper Guillermo Ochoa.

Tied for third place are Greece and the United States. Greece managed to drag out its round of 16 loss to the unexpectedly dominant Costa Ricans to a penalty shootout. Meanwhile the United States memorably pulled off feats like blindsiding Ghana in the group stage and tying with the internationally feared Portugal (nearly having won, as well!) to contribute to the knockouts of both these high-ranked opponents.

The team among the “serious contenders” that got the best return on investment was the Netherlands. “Oranje” were talked about as easy victims for the likes of Spain, but instead handed the reigning champs a 5-1 loss in the group stage as revenge for the 2010 finals.

Actual champions Germany didn’t crack the top five of return on investment, considering they were among the favorites to win it all. But they still over-performed compared to their market value. Their defeated finals opponents, Argentina, actually won exactly as many games as their market value indicated!

The Worst Return on Investment

Among the most underperforming teams, many of them had relatively small market values, but failed to meet even their low expectations. Bosnia-Herzegovina, Croatia, the Ivory Coast and Japan all had absolutely horrific results in the group rounds, a cause for sadness in these countries but minor if still regionally successful soccer traditions.

Cameroon was also not expected to do well. With a market value of $184,251,690 USD they needed only one win or tie. However, with a string of losses, they managed to under-perform.  On the other hand, Italy was expected to do well. Based on their market value, they should have made it into the round of 8. Alas, they failed to make it out of the group stage.

Ranking second for the worst return on investment is England. The team, one of the many underperforming juggernauts of Europe, was packed to the gills with superstars like Wayne Rooney but also failed to make it out of the group stage. For England, this was the first time this happened in more than fifty years.

The greatest suffering of all was reserved for Spain. The defending World Cup champions were also the defending UEFA all-Europe champions – an honor they had won twice in a row! As the team with the second-highest market value at $673,567,074 USD, they were seemingly destined to fall only to Brazil, but couldn’t even make it out of the group stage, able only to defeat Australia.

As for hosts Brazil, the team that was the overwhelming favorite to take home the trophy at the beginning of the tournament – they did not fare too badly as far as return on investment is concerned, having won three-quarters of the games they were “supposed” to – but the vagaries of soccer cost them the mighty Neymar, and anything less than the championship would have been a failure to them.

The Impact of the World Cup on Economic Productivity