The Cost of the Government Shutdown 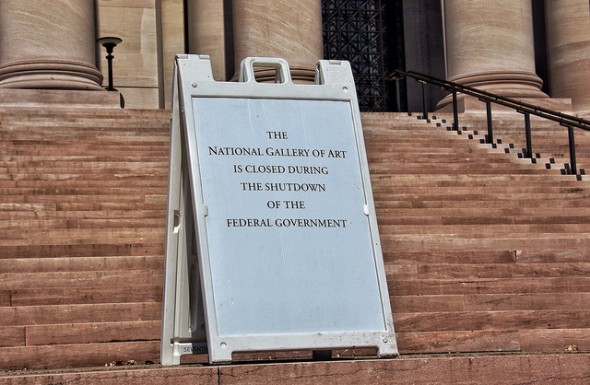 At times it may be difficult to determine exactly how Washington politics affect our day to day lives. Watching the fallout from the government shutdown makes very clear the direct impact the federal government has on millions of Americans.

According to some estimates, the government shutdown will cost the US economy about $1.6 billion per week, or about $300 million per weekday. The losses occur as a result of reduced productivity caused by the shutdown. For an already struggling economy, that is a big hit in productivity and money lost per week. However, this isn’t only about numbers; the shutdown actually affects real working people.

First of all, by now you know that many federal employees are seeing one of the most dramatic effects of the shutdown. Some federal workers are being asked to work without pay, and do not know when they will get paid next. Others are being asked to stay home on furlough or unpaid time off. This means hundreds of thousands of federal employees will not be receiving an income.

Veterans, children and senior are some of the hardest hit by the shutdown. Many projects and programs that receive federal funds are suspended or greatly reduced. Veterans may have their pensions and educational benefits held up. Additionally, services such as WIC and Head Start are shut down. Medicare is slowed down due to a decrease in staff. Federal prisons, the IRS, and Veteran’s Hospitals are still operational, but with reduced services. Assistance programs that are needed by some of the most vulnerable in our society are closed or backed up because of the shutdown.

One major concern is the damage this shutdown could do to long-term housing recovery. As we are well aware, the housing market is in a slow, but steady recovery. The government shutdown could hurt this recovery. Housing expert Morgan Brennan writes that although new mortgage loans will continue to be pushed through, the issue is that 90% of loans are underwritten by the government. Thus, the shutdown will result in longer wait times for loan approvals.

According to reports, it was feared that the Federal Housing Authority would not be able to endorse any single-family loans. However, this is not the case. Though with a diminished staff to endorse single-family loans and to underwrite and approve of these loans, the FHA is affected. Of course, a smaller staff means a much slower process.

The government shutdown is affecting many lives around the country. Unfortunately, all most of us can do is implore our representatives to do what we believe is right. Then we must sit and watch what happens next. Hopefully, the shutdown will be resolved quickly before doing too much harm to the economy and the lives of everyday Americans. After all, we will have a say about the shutdown the next time we vote.