The Biggest Changes in How Americans Use Their Time 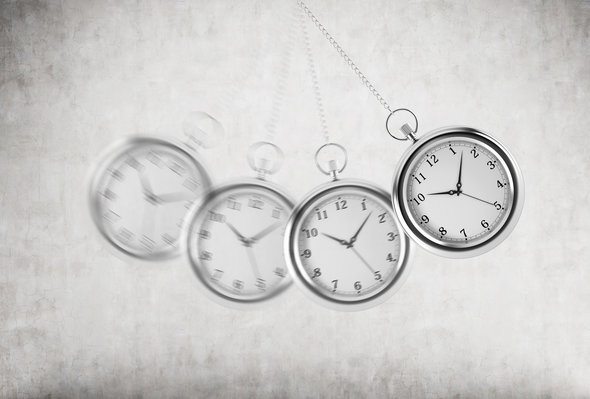 Looking back at 2005, it’s amazing to see how much the world has changed. Facebook was still in its infancy, iPhones didn’t yet exist and dial-up was still clinging to a dominant market share of the internet industry. In light of the seismic shift in how we interact with technology (and each other), we at SmartAsset were curious about whether the ways in which Americans use their time may have changed over the past decade.

Find out: How much do I need to save for retirement?

The Bureau of Labor Statistics releases an annual Time Use survey, so using that data, we’re shedding light on the biggest changes in how Americans used their time in 2005 as compared to 2015. In order to understand where we got our data and how we came up with our results, read the data and methodology below. 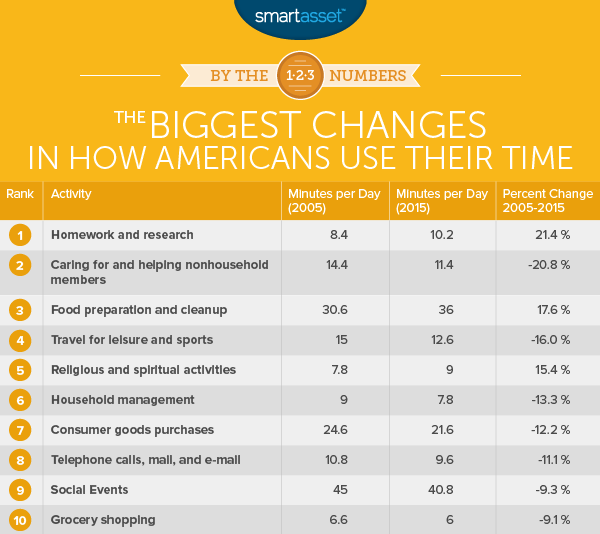 As mentioned earlier Americans are spending 21.43% more time on their education. It should be noted that this only represents a change of 2 minutes. In 2005 Americans spent around 8 minutes per day doing homework and research, while in 2015 that increased to 10 minutes.

2. Caring for and helping nonhousehold members

Americans spent 3 minutes less per day caring for and helping nonhousehold members in 2015 than they did in 2005. This category is distinct from volunteering (which saw no time change) and instead refers to helping children or adults who don’t live in one’s household. Americans also spent around 2 minutes less caring for and helping household members.

Maybe we’ve all discovered our inner foodie or realized we’re spending too much on eating out. Either way, Americans spent 17 percent more time on food preparation last year than in 2005. Men are the leading cause of the uptick in this category. They went from spending around 15.6 minutes on food prep and cleanup per day in 2005 to 21 minutes per day in 2015. Women do the lion’s share when it comes to this though. According to our data, women spend almost 50 minutes per day on this activity.

4. Travel for leisure and sports

In general time spent traveling is down. And traveling specifically related to leisure and sports, which includes things like driving to a football game or heading to yoga class, is part of this trend. In 2005 Americans spent 15 minutes per day on average on this activity. In 2015 it had dipped to 12.6 minutes.

Time spent on religious and spiritual activity is up over the past decade. Overall Americans spent 15% more time on spiritual activities in 2015 than they did in 2005. This equals an increase of about 1.2 minutes per day.

Americans averaged 9 minutes per day on household management in 2005. That number dropped to below 8 minutes in 2015, equaling a 13% decrease over the decade.

The change in this category came exclusively from women. Men spent the exact same amount of time on telephone calls, mail and email in 2015 as they did a decade ago. Women, on the other hand, went from around 14 minutes per day on this activity in 2005 to 12 minutes in 2015.

Are we less social than we were 10 years ago? Maybe so. Time spent at social events dropped 9.3% over the decade, to a still-respectable 40.8 minutes per day in 2015.

In contrast to food preparation, time spent on grocery shopping fell 9% over the decade, to an average of 6 minutes per day in 2015.

Watching TV. Although watching TV did not crack the top 10, it’s a category many would be curious about. According to the BLS data, the average American over the age of 15 watched 155 minutes of TV per day in 2005 and 167 minutes per day in 2015. This means that the average American increased their TV watching by 12 minutes per day or an extra 73 hours per year – which is slightly more than three whole days of nothing but watching TV.

Sleep. Sleep, like watching TV, didn’t make it into the top 10 but since it’s the single activity we spend the most time on it’s worth delving into the data. In 2005 the average American spent around 517 minutes or 8 hours and 37 minutes per day asleep. This number rose to around 530 minutes or about 8 hours and 50 minutes per day in 2015. That means that over the whole year, the average American got an extra three days of sleep compared to 2005.

Working. This may come as a surprise to some: Time spent working dropped from an average of 201.6 minutes per day to an average of 194 minutes per day. Extrapolating that figure out over a whole year shows that the average American spent 2.5 days less working in 2015 than they did in 2005.

The data and categories are taken from the Bureau of Labor Statistics’ 2005 and 2015 Time Use Surveys. In order to determine the biggest changes, we analyzed the percent change in each category from 2005 to 2015.

Any activity which took up less than 10% of an hour, or 6 minutes, was left out of the final table in order to highlight changes in the activities which Americans use the most time on. Uncategorized topics like “other” have also been removed from our final table. We have also changed the wording on a few category names to make them more understandable.

For its surveys, the BLS interviews Americans age 15 and up, so all mentions of average Americans means Americans over age 14.