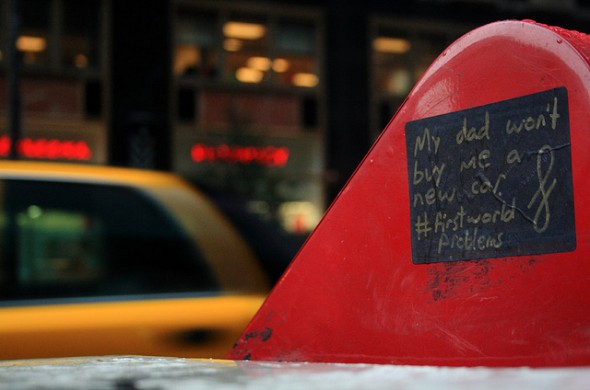 The two things we all have in common are that we are somebody’s child and that all our parents managed to have at least one or two things they told us repeatedly that made us crazy. I’m no exception. My father was and at 87 continues to be an endless fount of annoying aphorisms.

An often repeated saying of my father was “Luxury, luxury don’t you fret you will become a necessity yet!” Americans are good at many things, great at others and we truly excel at some. Our ability to complain is one of the things we excel at. There are times that we seem to be a nation of Goldilocks absent the middle choice of one being just right.

My father’s luxury, luxury aphorism has become an unwitting internet phenomenon of sorts thanks to websites like WhiteWhine.com and others like Buzzfeed.com that include samplings of people’s ridiculous complaints. It seems the more we have, the more we want. What’s best today will be second best tomorrow.

Related Article: Why it Will Cost More to Get Your Chocolate Fix

Some of the complaints we hear are just silly. Those include statement like this about the weather, “I wish it wasn’t so hot July when we don’t need it and hot in January when we do.” Unless of course you are sitting on a Jersey shore beach in August and hear the woman next to you on her cell phone wishing it would snow already because she’s too hot to get up and go in the ocean.

Other complaints are mindlessly selfish and just make you want to shake your head. On a recent trip to Manhattan I heard a man tell his wife “You would think they would make the poor people stay out of the nice neighborhoods, I mean we didn’t pay all this money to see poor people.”

There are however an entire class of complaints that are downright depressing and show a true lack of appreciation for just how fortunate Americans are. They are the complaints that are ironic when compared to third world countries. Great examples abound when it comes to technology. Like not being able to make a cell phone call while inside some malls and missing the point that in much of the world people are still without home telephones.

Food is another example of first world complaints that fail to appreciate irony. On a visit to Baltimore not too long ago I heard a guest complaining to the minimum wage housekeeper that the free breakfast buffet was out of bacon and it wasn’t fair that she would have to wait for more to be brought out.

Luxuries becoming necessities is not new and I suppose there have always been those that fail to appreciate what they have today relative to what they had yesterday. Which brings me to another expression from my long ago youth, he\she is built like a brick outhouse. Once a quality outhouse was a sign of wealth and prestige and now public restrooms with automatic soap dispensers are the norm while there are still people all over the world without flush toilets.

Related Article: Are we heading to Wine-ageddon? What the Global Wine Shortage Means For You