Fifteen Fastest-Growing Cities in the U.S. 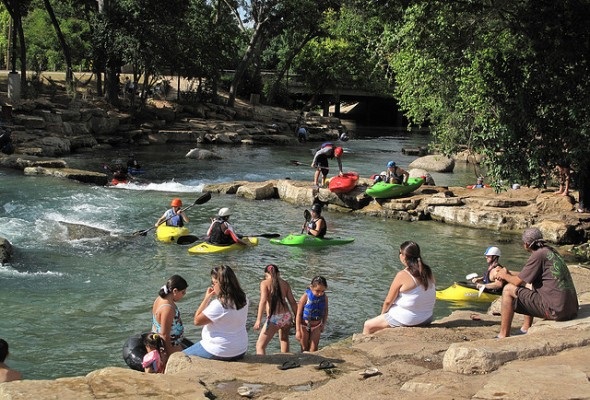 More people want to live in the south and west. At least that’s the news out of a recent government report on the fastest-growing cities in the U.S.

Related: Which Neighborhood is the Best Fit for Me?

Each year the U.S. Census Bureau conducts a report of population growth in the nation’s largest cities. The report focuses on a number of factors such as the number of people moving to and the percentage of growth for cities with populations of 50,000 or more. The data from this report reveals that more and more people are relocating to the southern and western part of the country.

The top two regions for population growth were the South and the West. Out of the top fifteen fastest-growing municipalities, Texas claimed seven cities.

Austin is the capital of Texas, and its region saw a significant amount of growth, with surrounding cities San Marcos (pictured above), Cedar Park and Georgetown included in the top ten. Other cities within Texas that claimed the fastest growing municipalities were Frisco and McKinney near Dallas, Odessa in West Texas and Pearland near Houston.

In addition, out of the top fifteen numeric gainers, five cities on the list were in Texas. These cities were Houston, San Antonio, Austin, Dallas and Forth Worth. But Texas was not the only state increasing its population, as California also had several cities in the top fifteen.

While the largest population growths were dominated by southern and western cities, other parts of the country did show some growth, as well. Columbus, Ohio gained 12,450 people, while New York City—the nation’s largest city by far—gained 61,440 people in the year ending on July 1, 2013.

Size of Our Cities

Most of the country’s cities aren’t even included in this study. According to the Census Bureau report of the 19,508 incorporated places in the US about 76% have fewer than 5,000 people living there and only 4% have 50,000 or more people.

There were fourteen cities in the U.S. that passed the 50,000 mark between 2012 and 2013 including Casa Grande in Arizona, Dublin and Palm Desert in California, Huntersville in North Carolina, Kentwood in Michigan and Apple Valley in Minnesota.

But that’s not the only way to measure growth – there’s also the cities seeing the greatest number of new people. The 15 fastest-growing cities by numeric growth are not the same – see them on the next page.