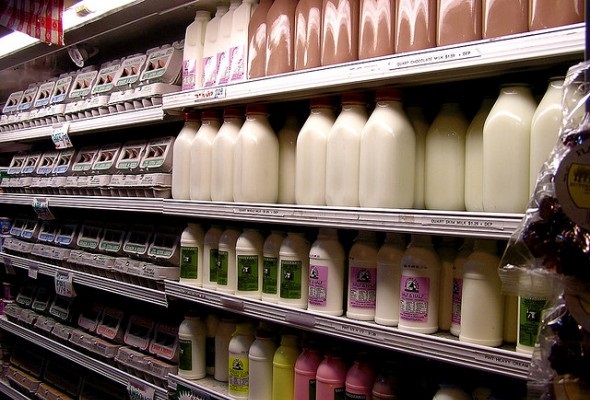 Around this time last year, lawmakers were scrambling to avoid the fiscal cliff and now it’s the so-called “dairy cliff” that Congress is grappling with. Without the passage of a new farm bill by the end of the year, milk prices could double to around $8 a gallon.

A Bunch of Bills

The farm bill that was passed in 2008 is set to expire at the end of this year. The bill was designed to override the permanent farm bill established in 1949. If the law is allowed to expire, the government would be forced to adhere to the older bill which means buying dairy products at nearly twice the market rate.

Related Article: Why it Will Cost More to Get Your Chocolate Fix

Congress has routinely passed temporary farm bills on a five-year basis to prevent permanent dairy prices from kicking in. If lawmakers aren’t able to agree on another long-term fix, the government would be required to buy and store large quantities of dairy products to support the higher prices. Doing so would cost the government an estimated $12 billion a year.

There’s also the potential for a shortage of dairy products on grocery store shelves if dairy producers are selling larger quantities to the government. As supply drops, prices could potentially increase further. A recent report from the Executive Office of the President estimates that domestic demand for dairy products would drop by around 9 percent. The report also suggests that higher prices would virtually eliminate that the domestic dairy export market.

Speaker John Boehner, R-Ohio has said that the House should extend the current law to allow congressional leaders more time to come up with a long-term solution. A proposed one-month extension was shot down earlier this week by Senate Democrats, who refused to pass any temporary measures before Congress adjourns for the holidays.

Senate Majority Leader Harry Reid, D-Nevada, said the Senate wouldn’t extend the current farm law unless Congress could agree on a long-term fix before the break.

The Agriculture Department has not said when it would begin to implement permanent dairy prices if the farm bill is not extended. Technically, the old bill could go into effect as early as January 1st but it’s likely that it could take several weeks or even months before consumers began to feel the impact.

Milk wouldn’t be the only commodity that would be affected if lawmakers aren’t able to reach a farm bill compromise. Prices for other products including corn and wheat would also revert to the older law, which means consumers could see their grocery bills skyrocket by the end of the year.

At the center of the farm bill debate are cuts to the food stamp program, which accounts for approximately 80 percent of the bill’s spending. The Senate is seeking to cut around $4 billion from the program while the House is looking to cut around $40 billion. Changes to crop insurance and other farm aid programs are also at issue.

The haggling over the farm bill comes at the same time as lawmakers are struggling to reach an agreement over the budget. If a deal isn’t in place by mid-January it could potentially trigger another government shutdown. Congressional leaders have until December 13th to vote on the farm bill and budget measures but it seems likely that a compromise won’t be reached until early next year.

Related Article: Are we heading to Wine-ageddon? What the Global Wine Shortage Means For You