5 Ways the Death of DOMA Makes Financial Sense For All 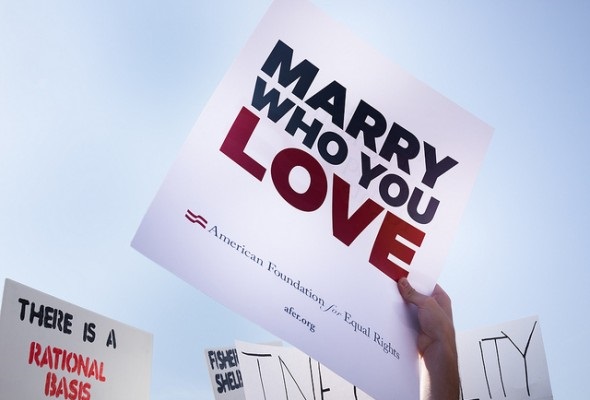 The global economy has shown signs of slowing. Financial security is not something easy to come by, and if found, should be considered a lucky thing to have. Some could say the same of finding a mate and getting married. It has been long known that marriage is financially beneficial for both parties for a number of reasons.

Now that DOMA has been struck down and gay marriage, in the 13 states it’s allowed in, is federally sanctioned, homosexual couples can (financially) breathe a bit easier. Equality isn’t just a matter of civil and human rights, but is also a logical foundation for financial stability. Although gay marriage has not been sanctioned in all states, the financial implications are monumental for many couples.

There are few things as unsettling to those without health insurance as the prospect of needing medical attention. Similarly, it is disconcerting to consider a future after retirement if something were to happen to your partner, and you were left strapped. Homosexual couples who decide to exchange vows will now be able to assuage some of those fears.

The Sacramento Bee recently published an article discussing some of the new found federal benefits, including health care coverage and retirement funds. The piece notes that many employers may have to change up the language of their forms, since spousal coverage will no longer be taxed federally. More couples can have some peace of mind for themselves and their possible future families.

Something almost every college-aged person learns that living with others lessens financial burdens. Sharing utilities, cable and internet bills, grocery bills, dividing up rent, and even purchasing furniture costs less per person with more people involved. Getting married also ensures that you can share costs, and extends to items like cell phone/data plans, car costs, and entertainment; who doesn’t want to split their bar tab with someone else at the end of the night? Living with someone else can have its drawbacks, but they typically aren’t financial.

According to TurboTax, there are numerous tax benefits to being married. It is, of course, well known that if both parties of a marriage make good money they can find themselves in a higher tax bracket, although there have been steps taken by Congress to reduce that sting a bit.

If one person in the marriage makes substantially more than the other, however, new tax benefits become available to that couple. TurboTax listed several of these benefits that prove yearly income should not be your highest priority when considering marriage:

A spouse can have an individual retirement account (IRA) even if they are not employed.
Married couples, if they both enjoy benefits packages from their employers, can pick and choose the most advantageous benefits from the two plans.
Less paperwork is involved for married couples: there is only one tax return to file!
The limit for charitable deductions is much higher for married couples.

This can be better news for one spouse over the other, but one partner’s great score can significantly help the partner with the lesser score. A decent credit score can help with all types of major purchases like cars, homes, and furniture. Better credit can also mean an easier time securing loans.

US citizens and permanent residents have the ability to sponsor a foreign fiancee or spouse for entry into the US. The dismantling of DOMA indicates that gay and lesbian couples may also have the opportunity to reunite with their significant others, and possibly pursue greater equality and acceptance in the US than they could abroad. New citizens and permanent residents will be able to lessen their financial burdens in the same way that heterosexual married Americans can. Greater mobility and financial opportunity for all are cornerstones of the global economy.

Given that immigration and gay rights are at the forefront of hot-button issues presently, there are plenty of implications and possibilities that have not been broadly explored. The issue is one that will undoubtedly be the center of heated discussion, especially in states like California that are home to many immigrants and new Americans. Outcomes remain to be seen, but it is highly likely that more couples will benefit from financial security.

A crucial tenet of the American dream dictates that one ultimate goal of every American should be the pursuit of a happy marriage, the creation of a family, and the ability to live financially sound. Now that DOMA is as dead as the wicked witch of the west, the ‘American Dream’ can be re-imagined as one that is equally available to all, heterosexual and homosexual couples alike. SmartAsset is a solid resource on personal finance for couples of every type, and welcomes your questions or comments in the section below.