States That Use Their 529 Plans the Most 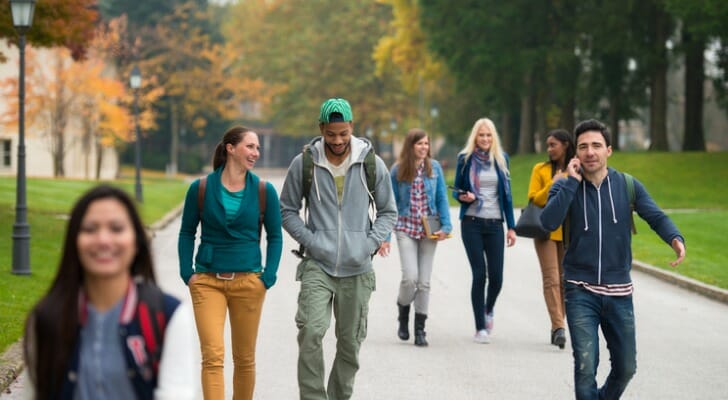 According to Bureau of Labor Statistics data, the price of college tuition increased by 63% from 2006 to 2016. Over that same time period, the median household income in the United States increased by only 19%. This makes college more expensive than ever for the average family. However, there are efficient ways that you can save for your children’s education. One example is through 529 plans. These are tax-advantaged savings plans designed to help people save money for schooling. Every state has its own plan or set of plans, but they are all a little different and vary in popularity. For example, some are actively managed, utilizing a financial advisor’s technical skills, while others have lower fees and are passively managed.
Below we look at data on state 529 plans to find which states utilize their 529 plans the most. To do this, we compare the number of 529 plans to the local population and the average account value to the average household income. Check out our data and methodology section below to see where we got our data and how we put it together to create the final rankings. 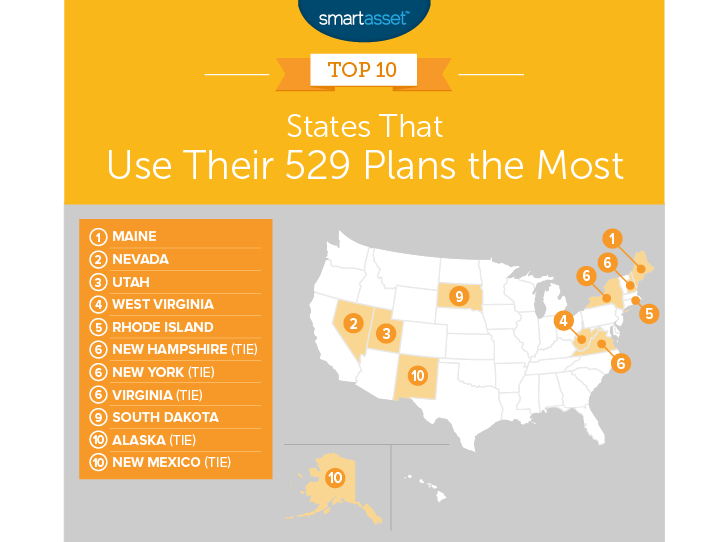 Nevada also ranks in the top five for both of our metrics but falls just short of the top spot. There are more open 529 accounts in Nevada than there are residents under age 20 . Only four other states can make that claim. Nevada 529 plans also stand out for their variety. There are five different 529 college savings plans available. Most states have two. The value of the average 529 account in Nevada is equal to more than six months’ worth of income for the average Nevada household. That’s the fourth-highest value in our study.

Coming in fifth is Rhode Island. The Ocean State offers two Rhode Island College Bound plans. Across the two options, there are around 338,000 open accounts, with a combined $7.9 billion in assets. Comparing those two figures to local data, we see that there is about one open 529 account per resident under age 20. The average account has a value equal to 42% of the median Rhode Island household income.

New Hampshire comes in tied with three other states for sixth in our ranking. The Granite State is one of the most popular states in which to open a 529 account. According to our research, there are more than 2.2 accounts per resident under 20 years old. New Hampshire ranks first in our study for that metric. However, the state falls a bit short on our other metric. The average 529 account has a value equal to just 36% of the median household income in New Hampshire.

New York offers two different 529 plans: a direct plan and an advisor plan. There are about one million New York 529 plan accounts in total. Those accounts have a total value estimated at $28.2 billion. Dividing account value by the number of accounts, we see that the average 529 account has an estimated value of $28,180. That is roughly 44% of the New York median household income.

Virginia is the third of the three states tied for sixth. Our data suggests that most parents invest with Virginia’s 529 college savings plans. The state has 1.24 accounts open per resident under age 20. That’s a top-three rate. However, judging by household income data, Virginia parents still don’t save as much as parents in other states. Virginia ranks 19th in the average value of 529 accounts.

The Mount Rushmore State takes ninth. The 529 plans in South Dakota are simply not as popular as in other states. Our data shows that there are 29,337 accounts in the South Dakota College Access 529 Plan. Those accounts are worth a combined $1.1 billion. That means the average 529 plan has a value of $37,500, one of the highest values in our study. In fact, when you control for household income, South Dakota ranks first in average value of 529 accounts.

Alaska comes in tied for 10th with New Mexico. The state has three different 529 plan types with the John Hancock Freedom 529 plan being the most popular. Between the three plans, Alaska has about 306,700 accounts with combined assets of $8.3 billion. Overall, Alaska ranks second in the number of accounts per resident under the age of 20. The state ranks 23rd for average 529 account value as a percent of household income.

Rounding out our list is New Mexico. New Mexico has two 529 plans: the Scholar’s Edge and The Education Plan. Between the two plans, Scholar’s Edge is more popular with around four times as many accounts and total assets. Overall, New Mexico ranks in the top 15 in both of our metrics. The state has one 529 account open for every four residents under age 20. The average account value is 41% of the state’s median household income.

In order to find the states which use their 529 plans the most, we looked at data for 49 states and Washington D.C. (Wyoming doesn’t sponsor any 529 plans.) Specifically, we ranked them across the following two metrics:

Tips for Saving for College