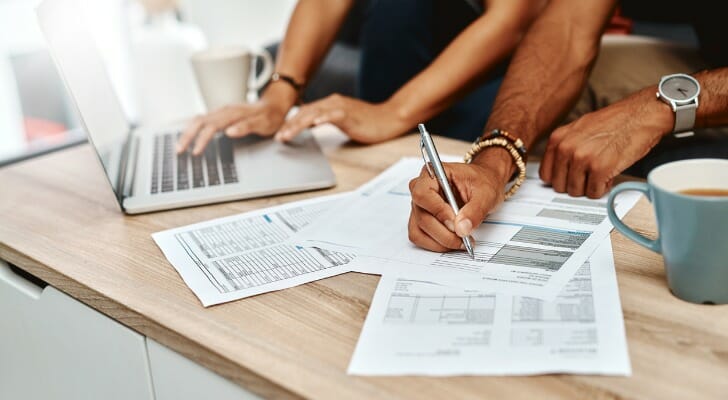 When it comes to taxes, is it more advantageous to get married or stay single? As far as the IRS is concerned, your income and location can ultimately determine whether a union is for richer or poorer.

The federal government, along with many state governments and some local governments, has a system of progressive tax rates whereby marginal tax rates increase as a taxpayer’s income increases. Because of this system, a couple’s income can be taxed either more than or less than that of a single filer’s. As a result, some married couples face a tax penalty while others receive a tax bonus when they file together rather than as individuals. While taxpayers who are already married cannot file as single taxpayers – since they must use either “married filing jointly” or “married filing separately” – these considerations may be useful when planning for the financial implications of marriage. For insight regarding your particular situation, speak to your tax preparer or a professional financial advisor.

There is a progressive income tax system in 32 of the total 50 states as well as in the District of Columbia. While the range of rates in these states is generally lower than the ranges at the federal level, some states have much higher rates than others. According to February 2020 data from the Federation of Tax Administrators, California, Hawaii and New Jersey have the highest state income taxes, with rates surpassing 10% at the high end of their respective brackets.

Of the remaining 18 states, nine do not collect any income tax and nine have flat tax rates, meaning that all taxpayers pay the same rate, regardless of their income level. Alaska, Florida, Nevada, South Dakota, Texas, Washington, Wyoming, New Hampshire and Tennessee do not tax income from salaries or wages. Of the nine states with flat tax rates, Pennsylvania has the lowest rate, at 3.07%, and North Carolina has the highest, at 5.25%. The map below shows the different types of tax systems by state. 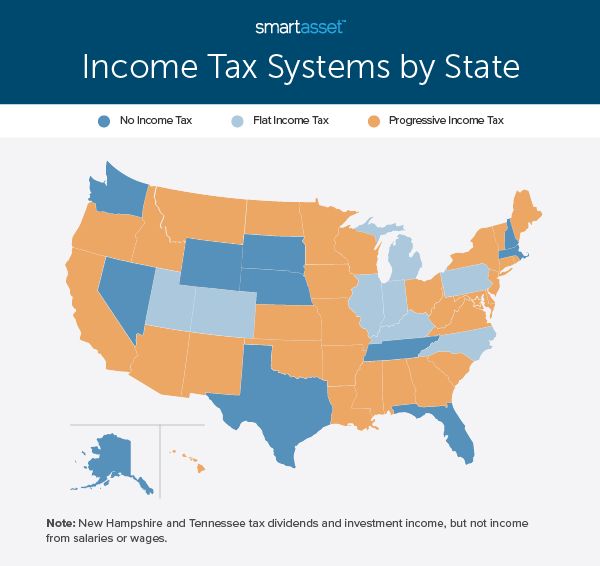 As noted previously, progressive tax systems allow for the possibility of marriage tax penalties or bonuses. Similarity in income between spouses typically leads to tax penalties, whereas greater income disparity between spouses increases the likelihood of a tax bonus.

Marriage tax penalties arise when a state’s range of incomes within a particular bracket for married taxpayers filing jointly is smaller than double the range applied to single filers. For example, in New York State, single filers making between $80,650 and $215,400 are taxed at the state level at a rate of 6.49% of the excess over $80,650. However, the corresponding bracket for married couples ($161,550 – $323,200) is not exactly double that of single filers, particularly at the upper end. This means that if two single individuals who each make $200,000 were to marry, their combined income of $400,000 would move them to a higher tax bracket with a rate of 6.85% of the excess over $323,200.

In contrast to marriage tax penalties within progressive tax systems, marriage bonuses in these systems actually still exist even if a state’s ranges of incomes for married taxpayers filing jointly are exactly double the bracket widths for single filers. If one member of a couple earns more than the other, their combined income may place them in a bracket with a lower effective tax rate. 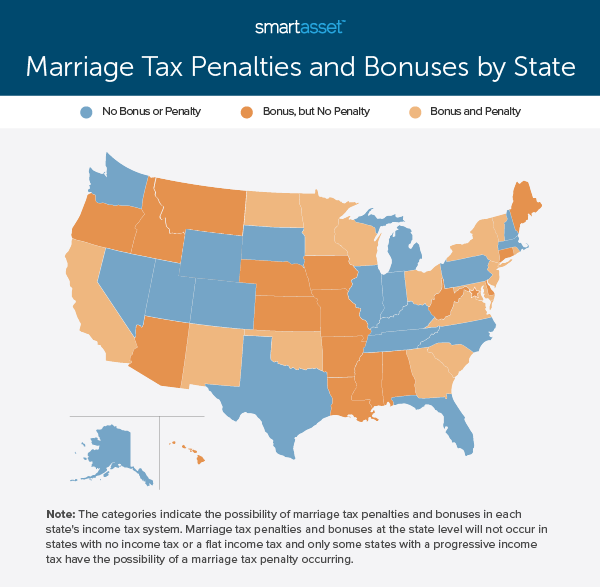 Unlike states, the majority of U.S. cities and counties do not impose a local income tax. According to the Tax Foundation, in 2019, a total of 4,964 jurisdictions across 17 states imposed a local tax. These jurisdictions are primarily located in the Northeast and Midwest, particularly along the Rust Belt.

More so than state tax systems, local tax systems vary widely in amounts and how they are administered. They also appear under a variety of designations, which include wage taxes, income taxes, payroll taxes, local service taxes and occupational privilege taxes. Under these designations, salaries and wages may be taxed at a flat rate, as a percentage of federal or state taxes or as even as a flat gross amount.

Marriage Penalties and Bonuses in the Five Largest Cities

Keeping in mind how tax rates change at not only the federal level, but also the state and local levels, we uncovered how the effective tax rate for individuals in the five largest U.S. cities changes if they get married. Given differences in effective tax rates for two single filers vs. married taxpayers filing jointly, we estimated marriage tax penalties and bonuses across different incomes in the five cities.

Individuals living in the Big Apple face taxes at three different levels: federal, state and local. The tax rate ranges for each are listed below:

Both the New York state income tax and New York City income tax are progressive (i.e. marginal) rates, which increase as taxable income increases. The table below shows the marriage tax penalties and bonuses for couples with incomes that span the seven federal tax brackets. We additionally considered the case in which one spouse is the sole earner. 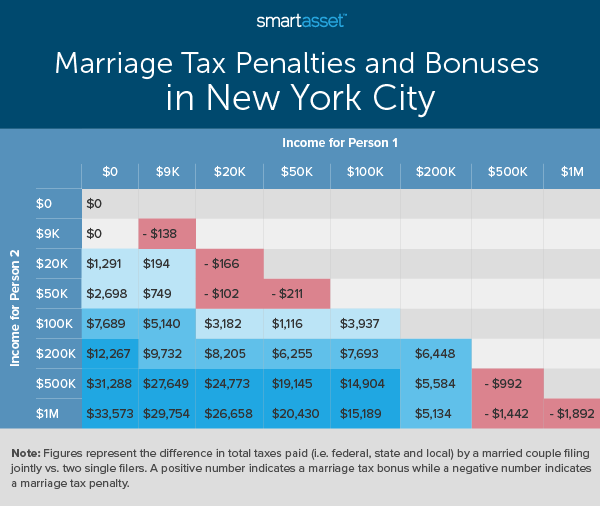 In six of the seven cases where one spouse is the sole earner, a couple who was married would receive a marriage bonus. Though the tax bonus increases in gross terms as the working spouse’s income increases, the bonus is highest as a percentage of earnings if the working spouse makes $100,000. In that case, the couple would receive a tax bonus of $7,689, or 7.69% of their total $100,000 income.

Low- and middle-class married couples making equal amounts are the most penalized in New York City. Specifically, the greatest tax penalty as a percentage of income occurs when both spouses earn $9,000. As a married couple, they would owe about $138 more in taxes compared to filing as single individuals ($1,515 in total taxes rather than $689 each). As a percentage of their combined income of $18,000, this is a tax penalty of 0.77%.

Los Angeles does not have a local income tax. However, the state of California has an income tax with a much wider range and more brackets than New York State. For the tax year 2020, state tax rates in California range from 1.00% to 12.30%, across nine income brackets. In addition, there is a 1% tax on personal income over $1 million, making the maximum rate 13.30% and bringing the total number of brackets to 10. California also contrasts New York State in that income brackets for married taxpayers filing jointly in California are double the income bracket applied to single filers. However, marriage tax penalties at the state level still exist for upper-income couples because of the 1% tax on personal income over $1 million. 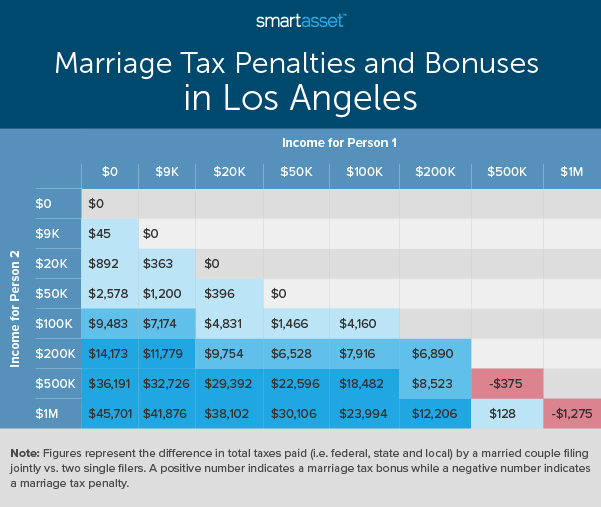 In general, marriage tax bonuses are higher in Los Angeles than they are in New York City, and marriage tax penalties are less common. Though the tax bonus is still the highest as a percentage of combined income if one spouse earns $100,000 and the other does not work, it exceeds the bonus in the same scenario in New York City by about $1,800.

Los Angeles residents who are extremely high earners will also face a penalty at the federal level. Notably though, these penalties are minimal as a percentage of total earnings. The extra $1,275 that a married couple would owe if each married partner had a salary of $1 million annually is only 0.06% of their combined income.

Unlike New York and California, the state of Illinois has a flat tax rate rather than a progressive state tax system. For the 2020 tax year, the state income tax rate was 4.95%. Because of Illinois’ flat tax rate, and the fact that Chicago does not have a local income tax, married couples in Chicago are only subject to federal-level tax bonuses or penalties. 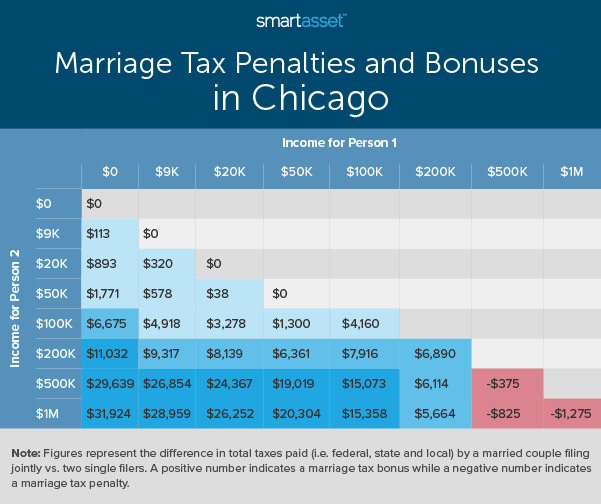 Like in Los Angeles, married Chicago residents filing jointly will only face a marriage tax penalty if they both are at the high end of the income spectrum. If each partner makes $500,000, or $1 million combined, they will pay an extra $375. If each partner makes $1 million for a combined household income of $2 million, they will pay an extra $1,275 in taxes. Additionally, if one person makes $500,000 and the other earns $1 million in a year, the couple will pay $825 more in taxes, or 0.06% of their combined income.

Texas is often considered one of the most tax-friendly states, because it has no state income tax. As Houston does not have a local income tax, city residents only pay taxes on their yearly income to the federal government. Thus, despite varying tax rates between cities, the marriage tax penalties and bonuses are the same in Houston as they are in Chicago. 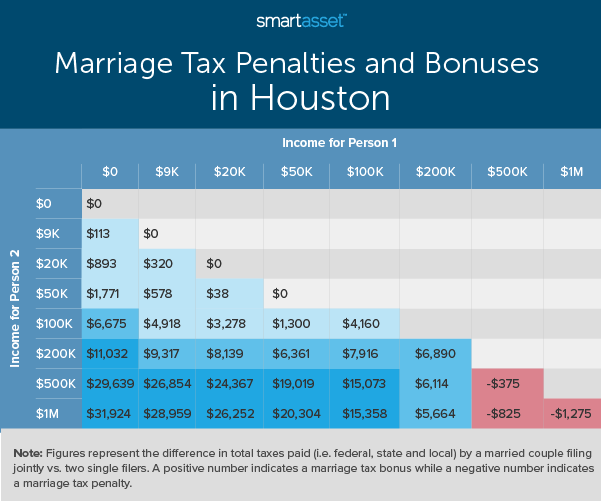 Of the cities previously discussed, the tax structure in Phoenix, Arizona is most similar to Los Angeles, California. Phoenix has no local income tax, and the state of Arizona has a progressive income tax in which income brackets for married taxpayers filing jointly are double the income bracket range applied to single filers. Despite these similarities, Arizona differs from California in that state tax rates are generally lower and there are only four income brackets. Because the state has fewer tax brackets and state tax rates that fall within a smaller range (2.59% – 4.50%), marriage bonuses are generally smaller. The highest marriage bonus is 7.46% as a percentage of a couple’s income. 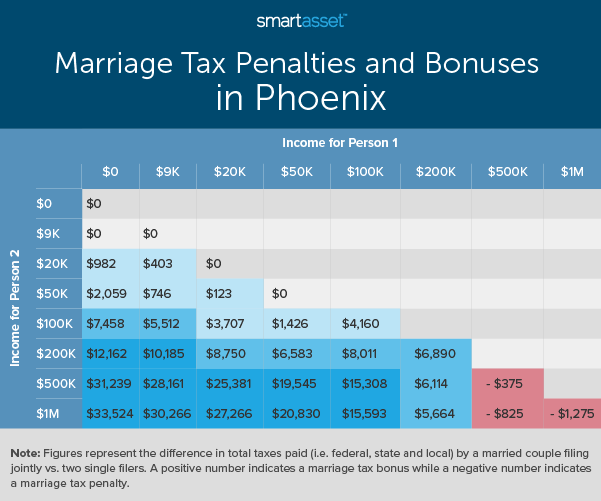 Research for the first part of this study comes from the Tax Foundation, a Washington, D.C.-based think tank that collects and publishes data on U.S. tax policies, and Kiplinger, a publisher of business forecasts and personal finance advice. Specifically, we looked at the following three studies: Understanding the Marriage Penalty and Marriage Bonus, Local Income Taxes in 2019 and 15 States With a “Marriage Penalty” in Their Tax Brackets.

For the second part of our study, we used SmartAsset’s income tax calculator. We assessed the presence of marriage tax penalties and bonuses in the five largest U.S. cities by considering 36 combinations of married couples with incomes spanning the seven federal tax brackets along with cases in which one spouse is the sole earner. To determine the marriage tax penalty or bonus in each scenario, we calculated the total income taxes each person would pay if a single filer and the total taxes the couple would pay if they were married and filed jointly. We assumed that both single filers and married couples who filed jointly took the standard deduction (i.e. $12,200 for single taxpayers and $24,400 for married taxpayers filing jointly). Using those amounts, we found the difference in taxes owed to determine the marriage tax penalty or bonus.

It is important to note that our research includes only couples who are filing with no dependents and does not account for the provisions of tax credits (i.e. the Earned Income Tax Credit or Child Tax Credit), which have been shown to affect marriage tax penalties and bonuses.