Cities Where Worker Burnout Is Most Likely – 2021 Study 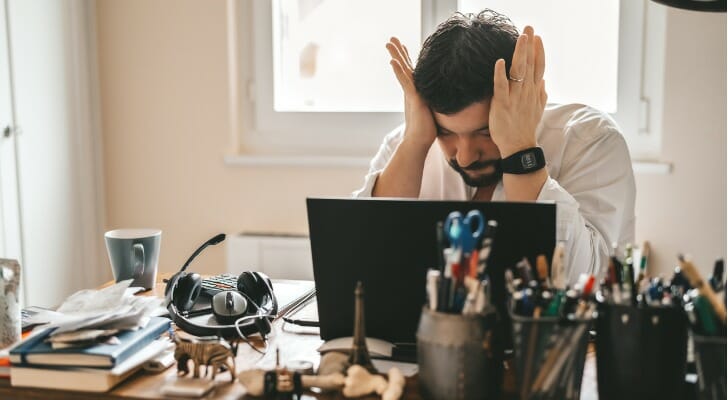 A 2021 survey from the staffing and recruitment firm Robert Half says that 44% of professionals reported feeling burnt out at their jobs. That’s a 10% jump from one year ago, when the COVID-19 pandemic disrupted the economy. This year, a record 3.8 million U.S. employees quit their private-sector jobs in April 2021 – and are still leaving their jobs at a breakneck pace. The national quit rate, or percentage of workers quitting their jobs each month, crested at an all-time high of 3.1% in April and remained at 3% in June. For perspective, roughly an average of 2.5 million left their jobs every month between January 2001 and December 2020, well below the 3.7 million who gave their two weeks’ notice in June 2021 alone.

Keeping this mind, SmartAsset set out to determine where in the U.S. worker burnout is most likely. We studied 100 of the largest cities in the country and examined 12 different metrics across three distinct categories: work schedule, health & well-being and financial stress. For details on our data sources and how we put all the information together to create our final rankings, read the Data and Methodology section below. 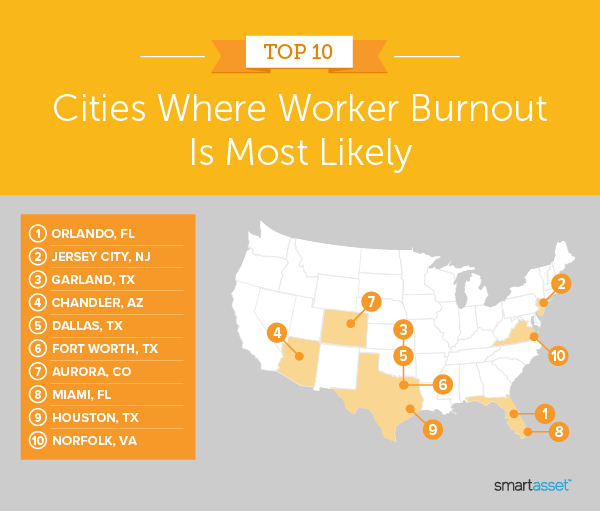 Orlando is the city where worker burnout is most likely in 2021. The Central Florida locale ranks fourth-lowest for its health and well-being score. Within that category, Orlando has the seventh-highest percentage of residents who are physically inactive (26.8%) and the eighth-highest number of poor mental health days per year (5.0).

Located across the Hudson River from Manhattan, Jersey City garnered the third-worst work schedule score in the study. Nearly 61% of workers in Jersey City work more than 1,750 hours per year, the fifth-highest rate for this metric overall. Meanwhile, a whopping 20.1% of workers have a commute longer than one hour (third-highest).

The labor force in Garland, Texas, which is part of the Dallas-Fort Worth Metroplex, works an average of 39.7 hours per week, tied for the 20th-highest across our study. However, the health and well-being score shows that this city has the second-highest percentage of uninsured residents (26.6%). Financial stress metrics rank Garland as having the 17th-lowest five-year change in income (16.55%) of all 100 cities in the study.

Over 60% of the population of Chandler, Arizona works more than 1,750 hours per year, seventh-highest among all 100 cities in our study. Residents of this Phoenix suburb also work an average of 38.7 weeks per year and 39.7 hours per week, 10th- and 20th-highest across our study, respectively. As a result, Chandler has the sixth-worst score for work schedule.

Workers in Dallas, Texas average more hours per week (40.5) than their counterparts in 97 other cities across our study. Meanwhile, the health and well-being score indicates that Dallas also has the fourth-highest percentage of uninsured residents (24.6%).

On average, workers in Fort Worth, Texas log the seventh-highest number of hours per week (40.1). The health and well-being score indicates that not only does this city have the eighth-highest percentage of uninsured residents (19.4%), but also only 5.76% of Fort Worth is designated parkland (ranking in the bottom 25th percentile for that metric).

Aurora, Colorado recorded the fourth-worst score for work schedule in the study, due in part to 60.0% of its population working more than 1,750 hours per year (10th-highest). Workers in Aurora log an average of 39.9 hours per week and 38.4 weeks per year (13th- and 15th-highest number of hours, respectively).

Another Texas hotspot for potential worker burnout, Houston ranks seventh-worst for financial stress. This category includes housing costs as a percentage of income, five-year change in income, estimated annual cost of living for an individual and unemployment. Houston has the 16th-lowest five-year change in income (15.38%). Additionally, metrics for health and well-being also show that it has the third-highest percentage of uninsured residents (25.2%).

Workers in Norfolk, Virginia log an average of 39.7 hours per week, tied for 20th-most across our study. Meanwhile, only 5.37% of Norfolk is designated as parkland, which is the 20th-lowest rate for this metric out of the 100 cities included in our study. 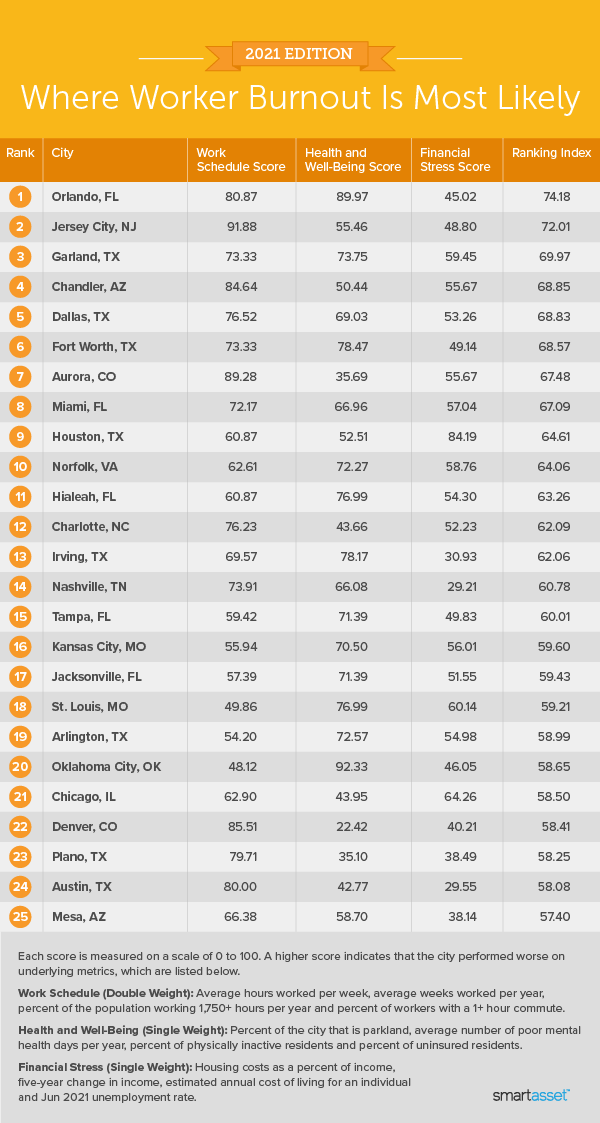 To determine the cities where worker burnout is most likely, we examined 100 of the largest cities in the U.S. and compared them across these three categories:

We ranked each city in every metric and found an average ranking and score for each category. We then found a final score, assigning the score for work schedule a double weight and averaging the three category scores. The city with the highest cumulative score ranked at the top of our list.