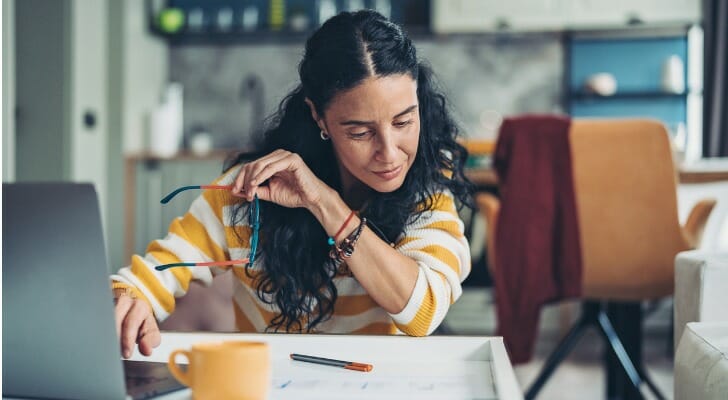 While the COVID-19 pandemic hit millions of Americans in their wallets, it also created a surge of new retail investors looking to capitalize on stock market volatility. A survey conducted by the FINRA Investor Education Foundation and National Opinion Research Center at the University of Chicago found that 57% of respondents opened a taxable investment account in 2020. Those who never had an investment account before were generally younger, earned lower incomes and were more racially or ethnically diverse than established investors. With retail investing becoming more popular, SmartAsset used the most recently available data to identify and rank the top places in the U.S. where people have been investing more.

To do so, we analyzed 198 metro areas across various metrics related to taxable interest, ordinary dividends, qualified dividends and capital gains. For details on the data sources we used and how we put all the information together to create our final rankings, read the data and methodology section below.

This is our second annual study on places where residents invest more. Check out our 2020 edition here.

Definitions for the four types of investment income we discuss in this article are as follows: 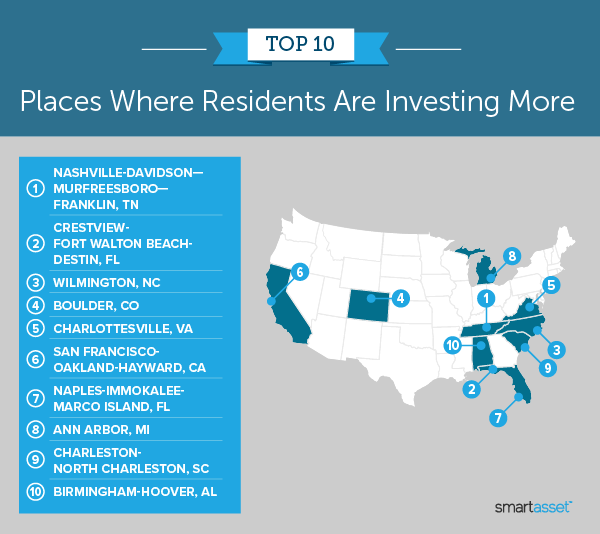 The Nashville area, which failed to crack the top 25 last year, is now the metropolitan area where residents are investing the most. Investors in Nashville and its surrounding areas saw average taxable interest jump 46.17% between 2014 and 2018, the seventh-largest increase in the study for this metric. The percentage of tax returns that reported qualified dividends also increased by 1.08% over the four-year period that was studied, the ninth-largest jump for this metric.

The Crestview-Fort Walton Beach-Destin area in the Florida Panhandle recorded the fourth-largest change in average ordinary dividends, which increased 52.77% between 2014 and 2018. This coastal metro area also saw the fifth-largest four-year increase in average qualified dividends across the study (61.86%). Meanwhile, 1.04% more investors in Crestview-Fort Walton Beach-Destin reported capital gains on their tax returns in 2018 than in 2014, the ninth-largest increase for that metric.

The Charlottesville, Virginia metro area ranks third for its four-year increase in tax returns with qualified dividends (1.90%) and third for its four-year increase in returns that reported capital gains (1.77%). Meanwhile, the Charlottesville area saw the percentage of tax returns that included ordinary dividends jump 1.90% between 2014 and 2018, the fourth-largest increase for this metric.

The San Francisco-Oakland-Hayward metro area in California ranks third for its four-year change in percentage of returns with ordinary dividends (1.93%). Between 2014 and 2018, the number of tax returns that included capital gains jumped 1.68%, while the number of returns that reported qualified dividends increased by 1.77%, fourth-highest for both metrics.

The Ann Arbor, Michigan metro area saw the 16th-largest increase (0.69%) in the percentage of returns that included qualified dividends between 2014 and 2018. Home to the University of Michigan, Ann Arbor also had the 18th-largest increase in tax returns showing ordinary dividends (0.77%) during the same timespan.

In the Charleston, South Carolina metro area, average taxable interest jumped 54.96% between 2014 and 2018, the third-largest increase across all 198 metro areas in our study. Meanwhile, the percentage of tax returns that included capital gains grew by 1.31% over the same four-year time period, the eighth-largest increase for that metric. Charleston also ranks 11th for its four-year change in percentage of tax returns showing qualified dividends (0.94%).

To find out where residents are investing more, we compared 198 metro areas across the following metrics: