Where Small Businesses Are Having the Most Trouble Hiring – 2021 Study 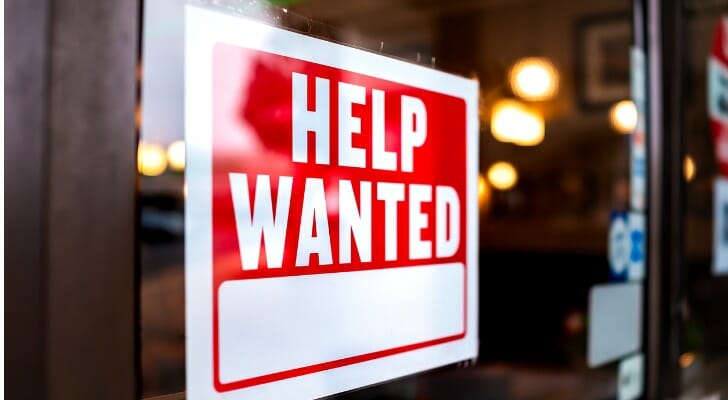 Layoffs and unemployment were early economic consequences of the COVID-19 pandemic. But 20 months after the pandemic shut down large swathes of the economy, businesses are contending with a new challenge: a larger percentage of people are quitting their jobs in 2021 than ever before and many employers are struggling to hire. In September 2021, there were over 10 million jobs available across the economy. That’s 4 million more open jobs compared with a year earlier, according to Bureau of Labor Statistics data.

To find the places where small businesses are having the most trouble hiring workers, SmartAsset examined Census Bureau data for all 50 states and Washington D.C., as well as 41 of the largest metro areas in the country. Using the data, we calculated the percentage of small businesses in each that are actively hiring but have reported difficulties finding new employees. For details on our data sources and how we ranked areas, read the Data and Methodology section below.

States Where Small Businesses Are Having the Most Trouble Hiring

Oregon has the second-highest percentage (62.6%) of small businesses that are trying to hire new workers but running into problems doing so, followed by Pennsylvania (62.3%), Maine (61.5%) and Delaware (61.2%).

In addition to Mississippi, other states with the lowest percentages of small businesses that are struggling to find workers despite actively hiring are: North Dakota (34.5%), Hawaii (37.2%), South Dakota (40.5%) and Wyoming (40.6%). The heat map below shows how other states stack up when it comes to the percentage of actively hiring small businesses struggling to find workers. 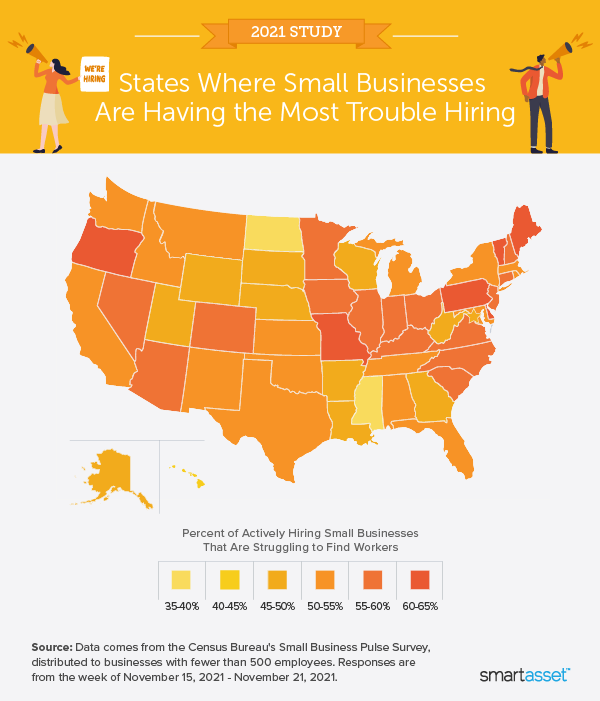 Metro Areas Where Small Businesses Are Having the Most Trouble Hiring

According to data from the Census Bureau’s Small Business Pulse Survey, the St. Louis metro area, which encompasses portions of eastern Missouri and southwestern Illinois, has the nation’s highest percentage of small businesses struggling to hire workers. In the St. Louis area, 68.4% of small businesses that are actively hiring are having difficulty finding new employees.

Following St. Louis, the Pittsburgh metro area has the second-highest percentage of employers experiencing hiring difficulties, as 67.7% of businesses with fewer than 500 employees reported struggles finding new workers. Meanwhile, the metro areas of Columbus, Ohio, Austin-Round Rock-Georgetown, Texas, and Phoenix-Mesa-Chandler, Arizona, have the third-, fourth-, and fifth-highest percentages of small businesses struggling to hire new employees, at 63.8%, 61.8% and 61.4%, respectively. 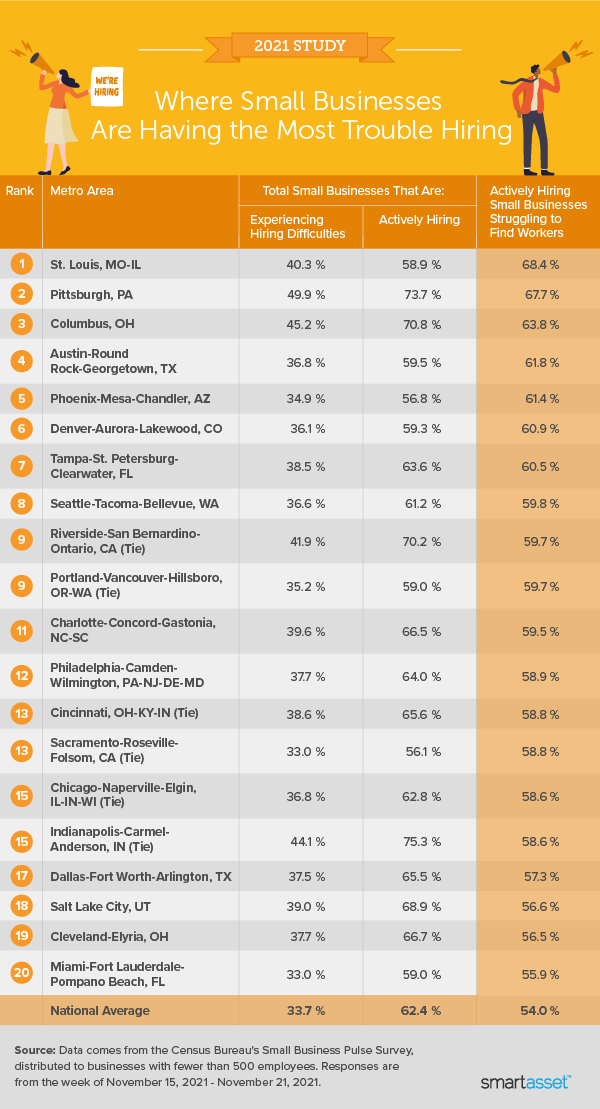 To find the states and metro areas where small businesses are having the most trouble hiring, we looked at two metrics:

All data comes from the Census Bureau’s Small Business Pulse Survey, distributed to businesses with fewer than 500 employees. Small business responses were collected between November 15, 2021 and November 22, 2021.