Best Places for Career Opportunities in 2021 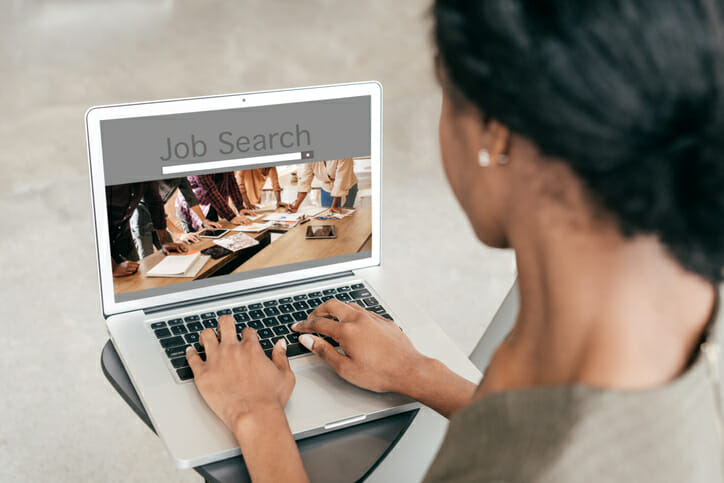 According to the Bureau of Labor Statistics, more than six million people reported not working at all or working fewer hours in June 2021 because their employer closed or lost business due to the pandemic. While the record high unemployment rate of 14.7% in April 2020 compelled many to budget carefully and remain cautious about changing jobs, the much lower June 2021 rate of 5.9% is leading some workers to reexamine their careers. SmartAsset analyzed data from various sources to identify and rank the metro areas with the best career opportunities in 2021.

To determine which places are best, we looked at 200 metro areas across seven metrics: unemployment rate, change in total employment over the past year, median income, income growth, annual housing costs, number of career counselors and the number of post-secondary teachers. For details on our data sources and how we put all the information together to create our final rankings, check out the Data and Methodology section below.

This is SmartAsset’s 2021 edition of our study on the best places for career opportunities. Take a look at the 2020 edition here. 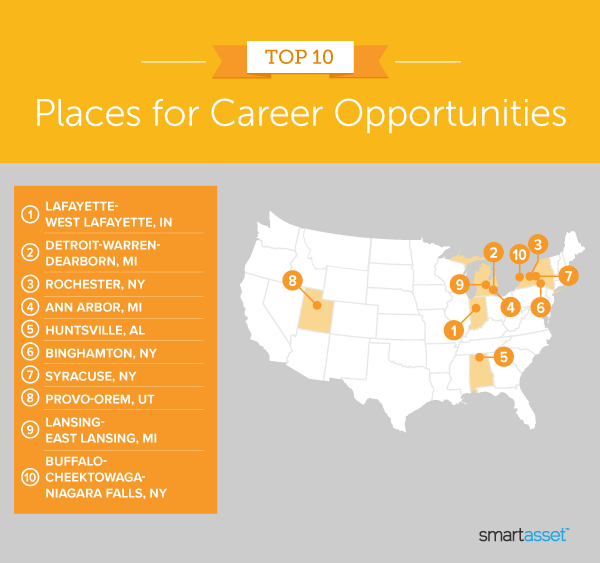 The Lafayette-West Lafayette metro area in Indiana saw 16.4% more workers on non-farm payrolls in April 2021 when compared with the same month in 2020. That’s the 15th-highest rate out of all 200 metro areas in this study. Unemployment in Lafayette-West Lafayette is also relatively low, at 3.5% in April 2021. Meanwhile, income growth over time, or the percentage change in median income for households where the head of household was between the ages of 25 and 44 compared to those where the head of household was between 54 and 64, is nearly 22%, ranking 25th overall.

The Detroit-Warren-Dearborn metro saw the number of workers on payrolls grow by more than 25% between April 2020 and April 2021, the third-highest growth rate out of all 200 metro areas in our study. The Detroit area also posted a 3.7% unemployment rate in April 2021, the 25th-lowest on our list.

After taking the No. 2 spot in last year’s rankings, Huntsville ranks fifth in this year’s edition. Huntsville had the lowest unemployment rate out of all 200 metro areas (2.2%) in April 2021 and the sixth-highest income growth over time (29.58%).  Additionally, Huntsville’s median income of $43,590 ranks 45th overall.

Binghamton, New York ranks in the top fourth of metro areas for four metrics. It has the 47th-highest one-year change in total employment (12.34%) and 23rd-lowest median annual housing costs (about $9,900). According to data from the BLS, Binghamton has the 10th-highest concentration of career counselors (almost four per 1,000 workers) and 15th-highest concentration of post-secondary teachers (about 29 per 1,000 workers) of all 200 areas in our study.

Workers looking for careers opportunities in Syracuse, New York may be happy to know that there are many professionals available to help. There are 3.53 career counselors and 37.67 post-secondary teachers per 1,000 workers in the metro area. Syracuse also has the 46th-highest median income in our study, at almost $43,600.

Provo-Orem had the third-lowest unemployment rate (2.4%) in April 2021 out of all 200 metro areas in this study. Home to Brigham Young University, this area of Utah also rates highly for income growth over time (fifth overall, at 30.76%) and number of career counselors per 1,000 workers (fourth overall, 4.57 per 1,000 workers).

Buffalo-Cheektowaga-Niagara Falls, New York rounds out our list of the top 10 places for career opportunities in 2021. It ranks in the top 20 metro areas for two metrics: one-year change in total employment (13.37%) and number of post-secondary teachers per 1,000 workers (26.74). Buffalo-Cheektowaga-Niagara Falls also has relatively low median annual housing costs, at less than $10,600. 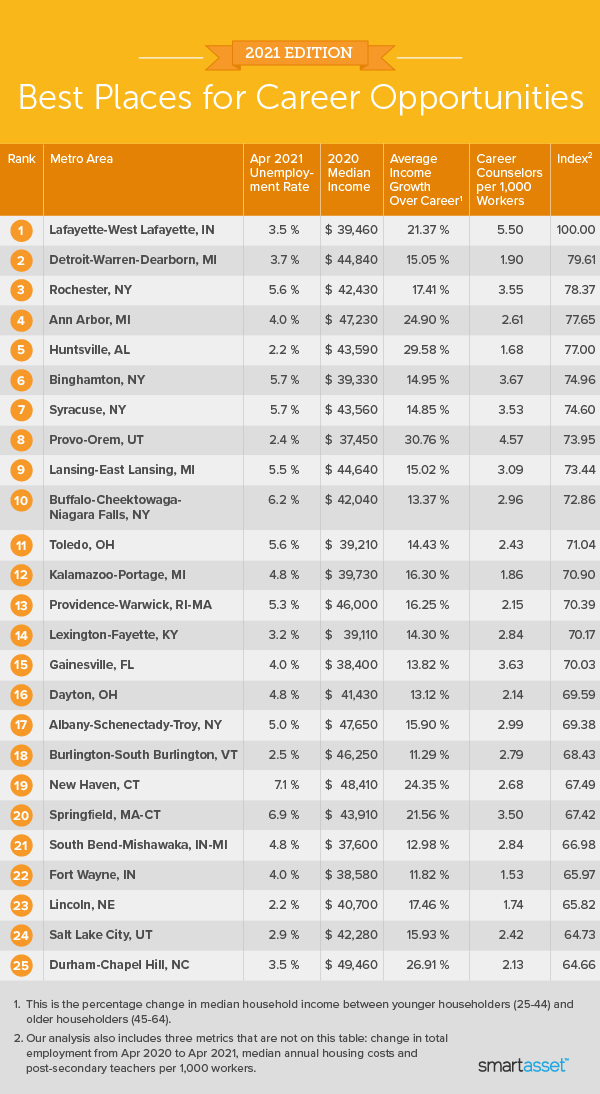 To determine the best places for career opportunities in 2021, we analyzed data for 200 of the largest U.S. metro areas across these seven metrics:

Make Your Career Earnings Pay Off With These Retirement Savings Tips