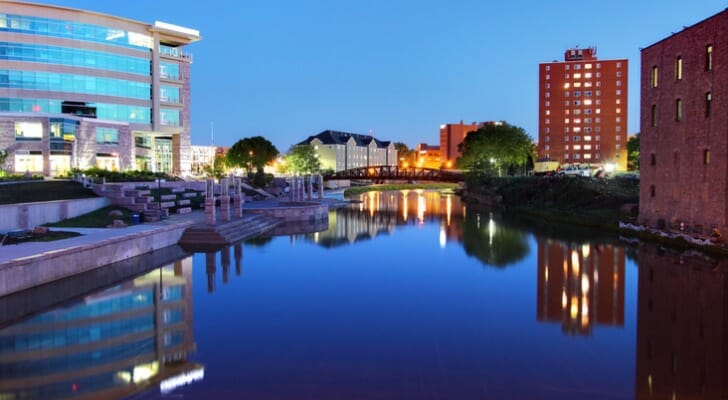 Remote work has increased dramatically during the COVID-19 pandemic, offering many young professionals greater flexibility to live farther away from their jobs. But it is unclear whether this employment trend will become permanent. A PricewaterhouseCoopers survey shows that more than two-thirds of executives think that employees should be in the office at least three days a week to maintain a strong company culture. This suggests that while remote work options may be more available in the future, professionals might still need to live near the office. With all this in mind, SmartAsset identified and ranked the best cities where young professionals are living in 2021.

We compared the largest 150 U.S. cities across nine metrics, looking at affordability, workforce demographics and entertainment options. For details on our data sources and how we put all the information together to create our final rankings, check out the Data and Methodology section below.

This is SmartAsset’s fifth annual study on the best cities for young professionals. Check out the 2020 version of the study here. 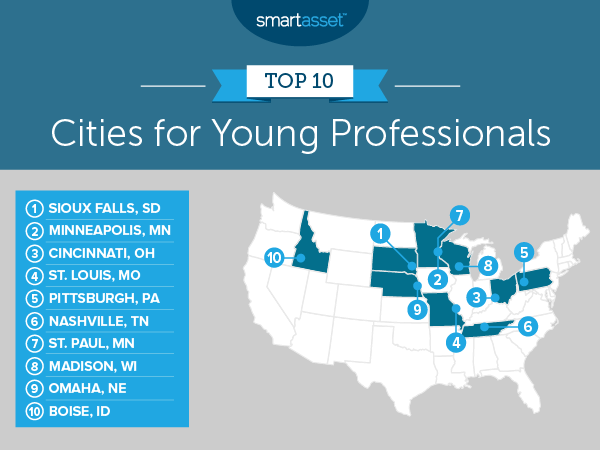 Sioux Falls, South Dakota ranks in the top 20 cities for six of the nine metrics we considered. It has the second-lowest January 2021 unemployment rate (3.2%) and the second-highest labor force participation rate among residents ages 25 to 34 (92.6%). The city is also very affordable, ranking 19th-best for its median monthly rent ($849) and 12th-best for the estimated annual cost of living (about $19,300). Finally, it has the seventh-highest concentration of entertainment establishments (2.92%) and the fifth-lowest median rent as a percentage of full-time workers’ earnings (22.33%).

Minneapolis, Minnesota ranks in the top 15 cities for four of the nine metrics in our study. It has the 15th-lowest January 2021 unemployment rate (4.5%) and rent makes up only 22.70% of full-time workers’ earnings. Additionally, many young people live in the city and are part of the labor force. Minneapolis has the 11th-highest percentage of the population between ages 25 and 34 (22.30%) and the 12th-highest labor force participation rate for young professionals (90.5%).

Cincinnati, Ohio is a very affordable city for young professionals looking to save. The estimated annual cost of living in the area is about $19,700, the 23rd-lowest in our study. Additionally, median monthly rent in the city is the fifth-lowest ($775) and it makes up less than 20% of median earnings for full-time workers. Almost 19% of residents in Cincinnati are between the ages of 25 and 34.

Like Cincinnati, Missouri’s St. Louis ranks particularly well on metrics that measure affordability. St. Louis has the ninth-lowest median monthly rent ($828) and the 43rd-lowest estimated cost of living (about $20,300). Additionally, earnings for full-time workers in St. Louis have risen over the past several years. From 2015 to 2019, median earnings for full-time workers increased by almost 19%, the 22nd-largest increase across all 150 cities.

More than 22% of the population in Pittsburgh, Pennsylvania is between ages 25 and 34, the highest rate in our top 10 cities and ninth-highest overall. Median earnings for full-time workers in Pittsburgh are more than $51,300. With median monthly rent at about $1,000, most workers will spend less than 24% of their pre-tax earnings on housing.

Nashville, Tennessee has a lot to offer young professionals with roughly 21% of the population falling between the ages of 25 and 34. On the county level, entertainment establishments make up almost one in 20 of all establishments, the highest rate in our top 10 and sixth-highest overall. Moreover, average earnings are on the rise. From 2015 to 2019, median earnings for full-time workers in Nashville increased by 20.28%, the 17th-highest change for this metric in our study.

St. Paul, Minnesota ranks as the No. 7 city for young professionals, moving up from No. 13 last year. Across the nine metrics our study, St. Paul ranks particularly well for its relatively low January 2021 unemployment rate of 5.0% and the relatively high concentration of entertainment establishments. Specifically, entertainment establishments make up 2.04% of all businesses in the area.

Madison, Wisconsin has the highest labor force participation rate for young professionals in our study, at 93.5%. The median earnings for full-time workers in the city are about $51,300, the 36th-highest out of 150. Madison also has the 16th-highest density of arts, entertainment and recreation businesses, making up 2.34% of all businesses. This city, however, falls farthest behind to the bottom third of our list with an estimated annual cost of living of over $22,300.

Omaha, Nebraska ranks in the top 30 cities for three metrics: January 2021 unemployment rate (3.8%), entertainment establishment density (1.87%) and median rent as a percentage of full-time workers’ earnings (23.85%). Census Bureau data also shows that across the 150 cities in our study, Omaha has the 41st-lowest median monthly rent, at $940. Median earnings for full-time workers there are the 56th-highest overall, at about $47,300.

Boise, Idaho rounds out our list of the 10 best cities for young professionals. It ranks in the top 10 cities for two metrics: January 2021 unemployment rate (3.9%) and estimated cost of living (about $19,200). Rent in the city is also relatively affordable, with a median monthly rent of $1,043, the 56th-lowest overall. Full-time workers in Boise earn about $48,300 on average, which means that less than 26% of their pre-tax earnings is spent on rent. 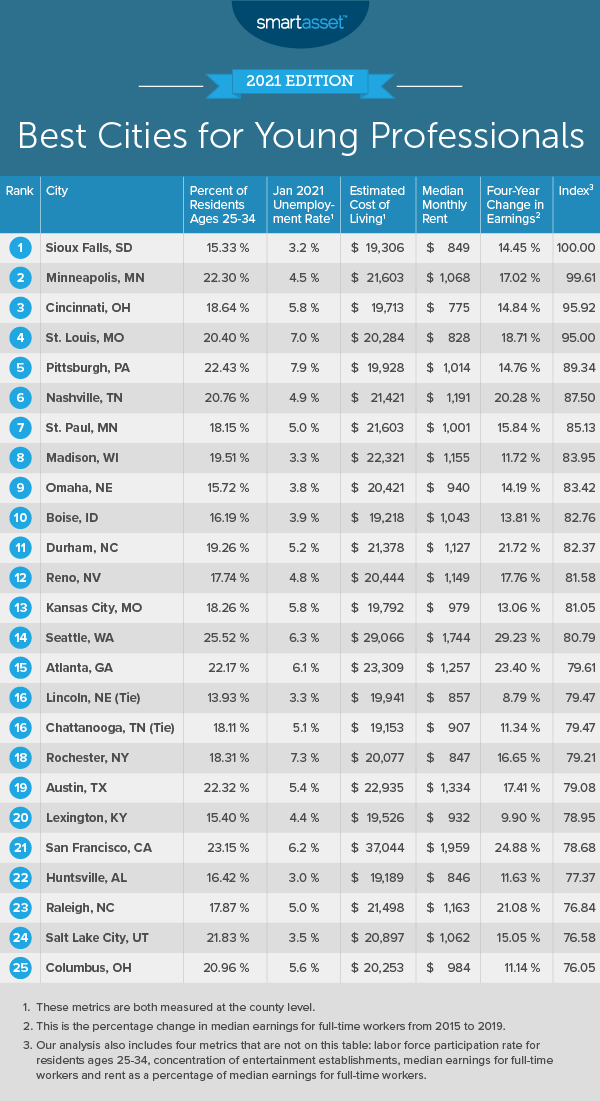 To rank the best cities for young professionals we looked at data for the 150 largest cities in the U.S. Specifically, we compared cities across the following nine metrics:

Tips for Deciding Where to Live?