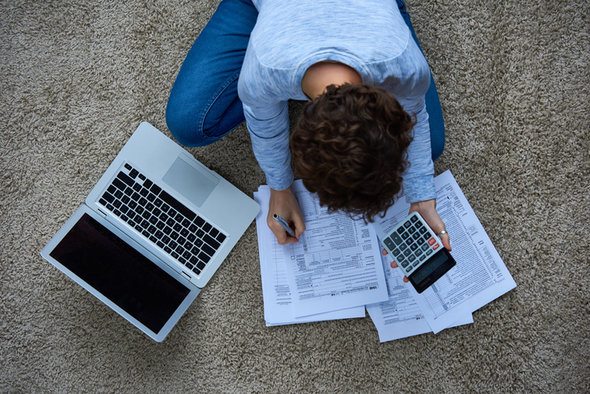 Tax season is a time of high stress for many Americans. It’s also the time when some Americans receive an unexpected windfall in the form of a tax refund. According to the IRS, the average tax refund is $3,120 and almost 83% of all tax returns result in a refund. While your tax refund may feel like a gift, it’s important to remember that you earned that money just like you did your paychecks. With that in mind, it’s a good idea to treat it like your other income. This includes creating a plan for the best way to use it.

We examined a few scenarios and crunched the numbers to help you determine the smartest way to use your tax return.

In order to come up with estimates for how to use your tax refund, we looked at data relevant to the average American. We used national data on the median income, median home value, average credit card debt and average student loan debt. We also considered data on average investment account returns and average savings account returns.

Using that data, we explored how your overall financial picture would be impacted by using that tax refund in five different ways. To do so we used the average tax refund – $3,120. Your return may be more (or less) than that amount. Regardless of the size of your refund, we hope this analysis is helpful in comparing some of the options available to you.

The average American has about $2,800 in credit card debt, according to the New York Federal Reserve. The average interest rate for that debt is almost 15.5%. Given that fact, using your tax return to pay off credit card debt will likely be the best option for most people. Here’s why:

If the average American wanted to pay off $2,800 in credit card debt by only making the minimum monthly payments (2% of the balance or $25), we estimate that it would take over 15 years to pay off on average. It would also cost around $3,307 in extra interest payments. That is 118% more than the original loan (which is basically what a credit card is doing – loaning you money). Even if you have good credit with a lower APR, say around 10%, the math is similar.

By putting an entire tax refund (that $3,120 average refund) toward the average credit card balance, you can knock out that entire debt. This allows you to put the money you were paying each month toward saving or investing for the future. 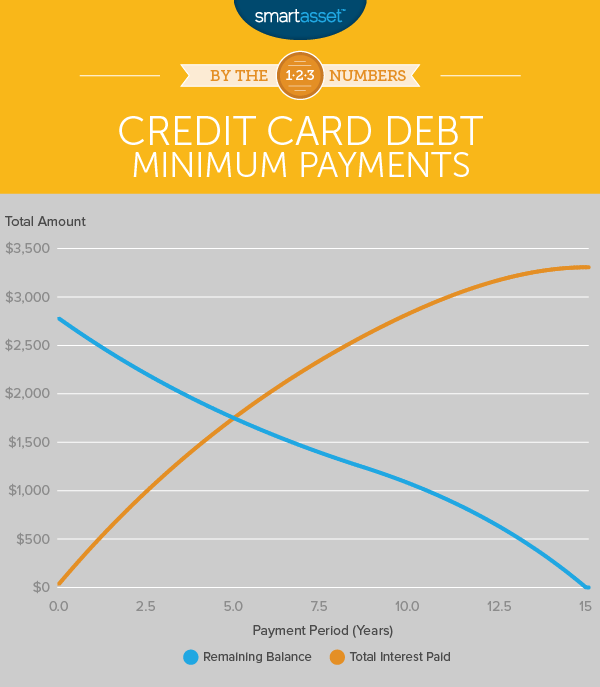 Plus, paying off credit card debt early has benefits besides lowering interest payments. If you only make the minimum payments, you may end up with a high debt-to-income ratio. And if you consistently have a high debt-to-income ratio, it could hurt your credit score. Then you may not qualify for the best interest rates when it comes time to apply for a mortgage or buy a car.

For those whose credit card debt exceeds the amount of your tax refund, you will have to decide which credit card debt to pay down. If you are looking to save the most money in the long term, it can be a good idea to pay the one with the highest interest rate first. Then for the rest of the debt, depending on your circumstance, it may make sense to use a balance transfer credit card. This will give you a limited time to pay off your credit card debt interest-free. It’s important to make sure you pay it off during that time to avoid accumulating even more debt.

After paying off your credit card debt, or if you don’t have any to worry about, your best bet is probably to place your tax return in a retirement account. If you make less than a certain amount ($118,000 for single filers or $186,000 for joint filers) and if you haven’t already maxed out your IRA contribution ($5,500 for those under 50 and $6,500 for those 50 and above), you can put your tax refund into a traditional IRA. The money you put in a traditional IRA will be tax deductible. You can also opt to put your refund into a Roth IRA, though that money will not be tax deductible. Learn more about the differences between a traditional IRA and a Roth IRA here.

The average American household makes $55,775, according to the U.S. Census Bureau. SmartAsset’s income tax calculator estimates that by contributing the entire average tax refund ($3,120) to a traditional IRA, a household that makes $55,775 would lower their federal taxes from $8,520 to $8,052. Another way to look at it is that in the first year, the initial investment of $3,120 will have earned $468 – a 15% return. 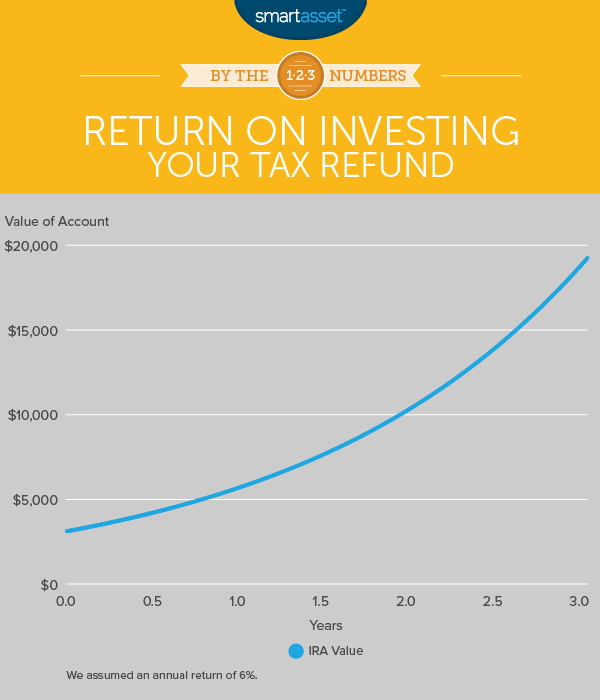 Set up an Emergency Fund

If you do not currently have an emergency fund, your tax refund could go a long way toward setting one up. An emergency fund is an amount of money you have stashed away in case you lose your job or are faced with some unexpected cost, like a large health bill or your car breaks down and needs expensive repairs.

Typically, experts say this fund should be around six months’ worth of living expenses. Now keep in mind the average savings account has a 0.06% yield so if you put a $3,120 tax refund into it, you will only accrue $56 of interest after 30 years (if interest accrues annually). But the point of an emergency fund is not to grow, it’s to give you a financial safety net. This decreases the likelihood that you will have to borrow money (and rack up credit card debt) or face early withdrawal penalties on other accounts if you encounter a financial emergency.

Since the average American household makes $55,775, after federal taxes of $8,520, this leaves a monthly net income of around $3,938. If this is your living expenses (and hopefully it’s less since some of that money is going toward retirement savings), the average tax return of $3,120 will give you a jump-start of nearly one month’s living expenses in your emergency fund.

By using the average tax refund ($3,120) toward that student loan, you’d lower the amount owed from $4,660 to $1,540. This would lower your monthly payments to $16 if you still paid it off over 10 years. Or if you continued making $50 monthly payments, you would finish paying off your loan in three years and you’d save $1,066 in interest payments. 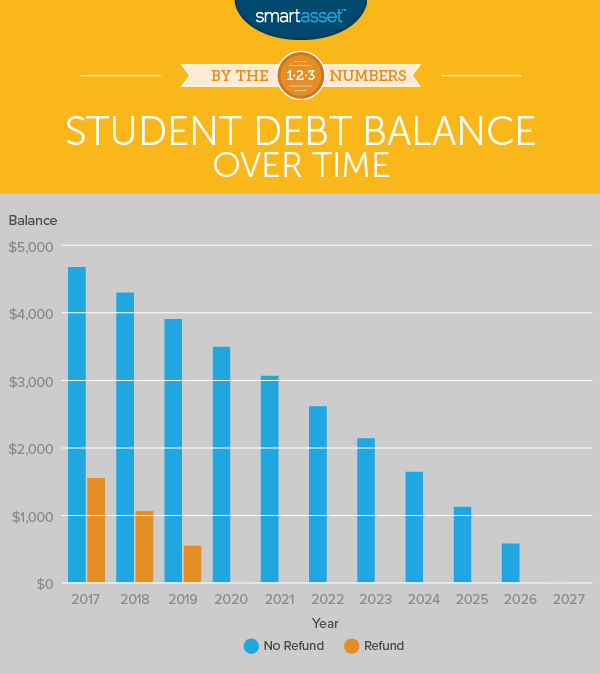 Of course some people have much more in student loan debt. In fact, graduates of the class of 2016 who took out student loans have an average debt of $37,173, according to student loan expert Mark Kantrowitz. Paying off the principal on that loan earlier can result in a lot of savings on the interest in the long term.

Curious about how much you’d save if you put your tax refund toward your student loan? Our student loan calculator can help you figure out your specific financial situation.

Let’s imagine you’re one of the lucky Americans who has a healthy emergency fund and no outstanding credit card debt or student loan debt. Do you have a mortgage? Would it make sense to try and pay off some of your mortgage early if you don’t have any early payment penalties? Let’s take a look:

The median home value in American is $194,500. If you made a 20% down payment, you would be left with a mortgage balance of $155,600. According to our mortgage calculator, your monthly mortgage payments would be $743, on a 30-year loan with 4% interest. (The monthly payment does not include home insurance or real estate taxes which vary by region.)

By putting an extra $3,120 (the average tax refund) toward the principal of that mortgage, you would pay it off 13 months early. This calculation assumes that you make the extra payment after 12 payment periods or one year of having your mortgage.

After 21 years of doing this (assuming your tax refund continues to be $3,120 each year), you will only have three months of mortgage payments left. So you’ll have paid off your mortgage almost nine years early. That’s not a bad deal!