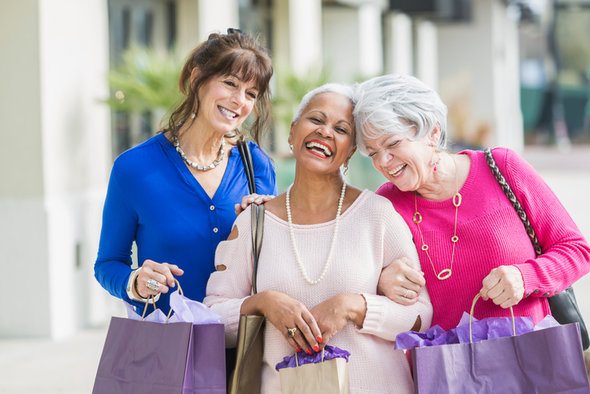 Thanksgiving is traditionally known for spending time with family and eating delicious food. But more recently, time spent eating and giving thanks has been losing ground to time spent shopping. Black Friday is now just as much a part of the Thanksgiving tradition as turkey is. With this in mind, SmartAsset delved into the data to find the places with the most retail credit card debt in America. 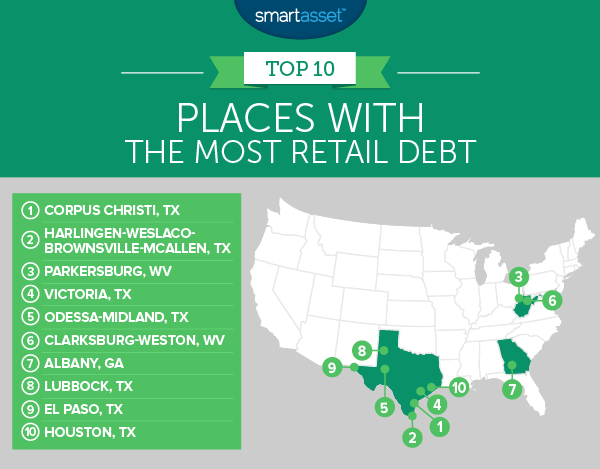 According to our data, Corpus Christi residents use their retail credit cards more than anyone else in the study. This area has the second-highest average amount of retail debt at $1,590.

That $1,590 makes up a good chunk of Corpus Christi residents’ debt. The average resident here has about 3.84% of their non-mortgage debt tied up in retail debt. That is the sixth-highest rate in the country.

Residents here are no strangers to opening retail credit cards. Our data shows that residents in this area have the highest average number of retail cards (2.02) and the third-highest amount of retail debt ($1,577).

While $1,577 may not seem like an enormous figure, it’s actually worth around 9% of the average resident’s annual income. For that metric Harlingen-Weslaco-Brownsville-McAllen ranks first.

While that rise in total retail debt is important, what is more important is the average resident’s debt-to-income ratio. While retail debt has gone up, incomes, for the most part, have not. U.S. Census Bureau data shows that median individual incomes in this area dropped around $2,000 from 2014 to 2015. Currently, residents of Parkersburg have the ninth-highest amount of retail debt relative to median income.

The good news for residents here is that they do not seem overly reliant on retail cards. Our data shows the average resident only has retail debt worth about 5% of their income.

By 2016 the average Odessa-Midland resident had racked up about $1,660 in retail debt. In no other place in the study can residents claim to have more retail debt.

Other evidence also points to Odessa-Midland residents as people who like to use retail cards. Take average retail debt as a percent of non-mortgage debt. The average resident here holds retail debt worth just under 4% of their overall debt, the seventh-highest rate in our study.

The only place to secure a spot in our top 10 outside of either Texas or West Virginia is Albany, Georgia. Residents here have a low number of average retail credit cards for an area in our top 10. The average resident has 1.48 retail cards.

But while Albany residents may not have a large collection of cards, they do frequently use the ones they have. This area has the 13th-highest amount of average retail debt in the country at $1,377. That retail debt is worth 6.19% of the individual median income in the area, the eighth-highest rate in the country.

The key to managing any kind of debt is to make sure you are able to pay it off. While that may be simple in practice, debt can sneak up on you. Lubbock residents may have found that their retail debt sneaked up on them. Average retail debt here rose 25% from 2010 to 2016.

Residents have the fourth-highest average retail debt in the study. Overall residents here have about $1,489 in retail debt, that’s equal to around 6.6% of the area’s median individual income.

However El Paso residents were already holding a lot of retail debt in 2010. Despite the lack of growth, retail debt here is worth 6.7% of the average resident’s annual income. Retail debt is also worth about 3.4% of total non-mortgage debt. In both those metrics El Paso ranks third.

Houston is the final and biggest city in our top 10. Residents have the 10th-highest amount of average retail debt in the study. But thanks to relatively high average incomes that debt is not crippling. Overall the average resident here has retail debt worth about 4.5% of their income.

But retail debt may become a problem if Houston residents continue to pile it on at the rate they did from 2010 to 2016. Over that time period average retail debt in the area grew just under 25%. 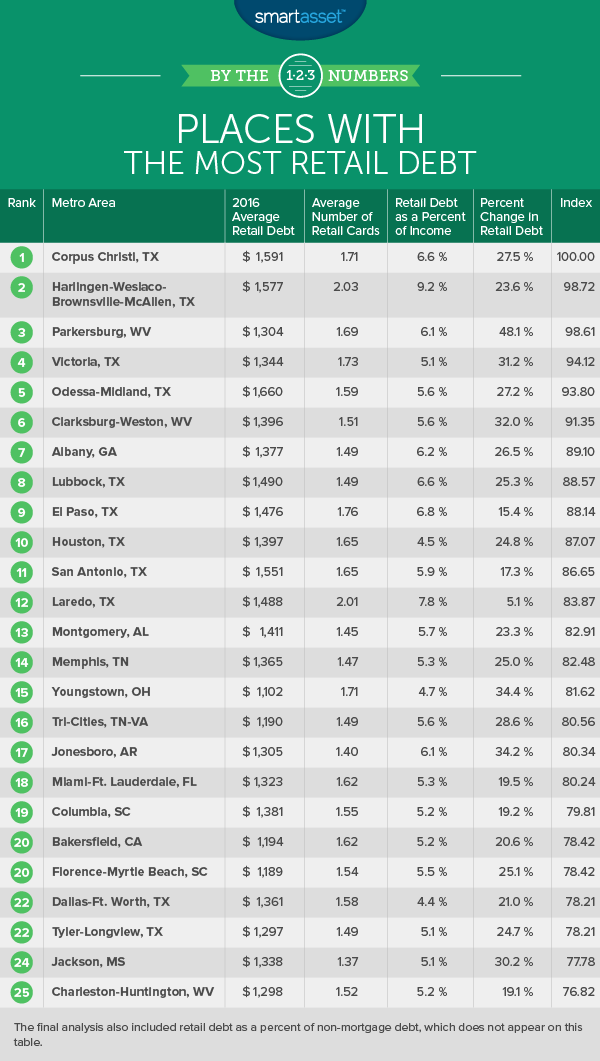 In order to conduct this study of retail credit card debt, we compared 199 cities across five metrics. Specifically, we analyzed data on the following five metrics:

Many stores offer their own credit cards to shoppers. But before you jump at the chance to get 20% off your initial purchase, it’s a good idea to consider a few things before signing up.

First what is the card’s APR? If the store credit card comes with a really high APR and you are not sure you will be paying off the whole balance each month, it may not make sense to open it. Whatever rewards you may earn could be outweighed by the added interest payments. Ideally you would pay off the entire balance on any credit cards you have every month. It’s also crucial that you make your payments on time to avoid late fees.

You’ll also want to find out if there is an annual fee. If you are only getting the card for the initial benefit or you don’t frequent the store often, getting a credit card with an annual fee may not make sense. There are plenty of reward credit cards, which you can use at every store, that come with no annual fees.

Lastly, if you do decide to open a credit card at your favorite store, remember that as with all credit cards, it’s best not to charge more than you can comfortably afford to pay.