Where Cardholders Can Save the Most by Improving Their Credit Score 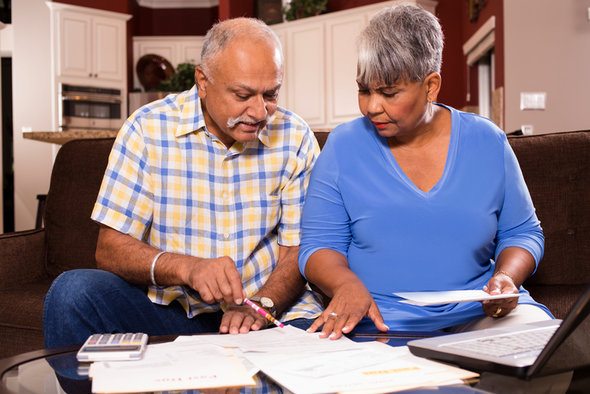 At SmartAsset we talk a lot about the importance of maintaining a high credit score. An excellent credit score allows you to gain access to the best rewards credit cards, the lowest mortgage rates and other financial perks. But the benefits from increasing your credit score can be hard to quantify. With that in mind, we crunched the numbers to find the places where credit card users would benefit the most by improving credit scores.

Sitting on a ton of credit card debt? Consider using a balance transfer card to help pay it off. 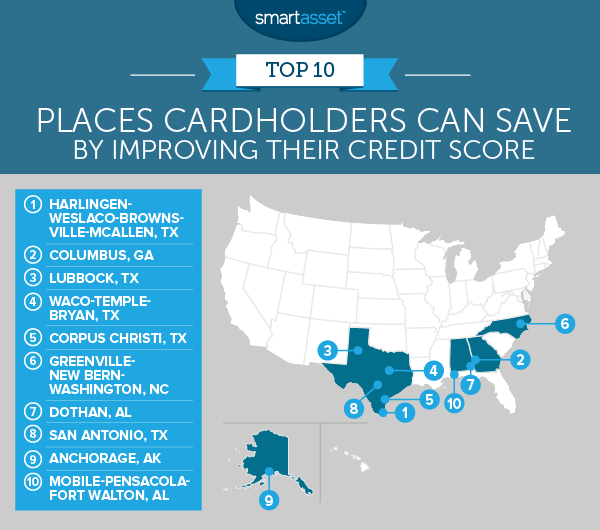 According to our estimates, the average credit cardholder living in this area could save just under $5,000 from raising her credit score by 50 points. That’s almost $2,000 more than the metro area in second place.

One reason residents of the Harlingen-Weslaco-Brownsville-McAllen metro area have the potential to save so much is that, due to their low median income, it takes them a long time to pay off credit card debt.

Of course, if they are able to improve their credit score even more, say to the 700+ range, they could unlock access to credit cards with the lowest APRs.

The Waco-Temple-Bryan metro area ranks fourth. The average resident has the potential to save just over $2,400 by raising his credit score 50 points. Improving the area’s average credit score by 50 points would mean going from 656 to 706. This would lower the estimated interest rate from 16.54% to 14.18%.

Like other cities above, residents in this metro area are extending the pain of credit card debt by not paying it down aggressively enough. Our data shows that if Waco-Temple-Bryan residents were spending 5% of their average monthly income on credit card debt, that payment would only amount to $92.50 per month.

Dothan residents had one of the lowest average credit card debt totals in the top 10. So why do our estimates say they could save so much by improving credit scores? Income.

According to Census Bureau data, 5% of the median monthly income in Dothan is only $91.21. Spending that toward an average credit card debt of $5,400, means that debt’s going to stick around for a while. And it’ll cost you. Overall we estimate that an increase of 50 points on the average credit score in Dothan could save the average resident $1,928.

Fortunately Dothan residents are already working with the third-highest average credit score in the top 10 (a score of 657).

We estimate that if the average San Antonio resident improved her credit score by 50 points, she could save $1,920 on credit card payments. The reason she’d save so much is that the expected APR would drop from 16.73% to 14.37%.

We found that increasing the average Anchorage resident’s credit score by 50 points, the estimated APR would be lowered from 15.91% to 13.55%. This could result in just under $1,850 of savings on credit card interest.

Mobile-Pensacola-Ft. Walton rounds out our top 10. Our data suggests that residents stand to save around $1,791, by improving the average credit score by 50 points.

In order to find the places where cardholders can save the most by improving credit scores, we analyzed data on 202 metro areas. Specifically we looked at data on the following four factors:

Finally we compared the interest costs in the two scenarios. We ranked the metro areas from highest difference in interest cost to lowest.

This study looked at how much credit cardholders can save by improving credit scores. What are some of the best ways to boost your score?

Next you should work on getting your accounts in tip-top shape. This means paying any debts which you’ve been ignoring, and bringing your accounts up to date. While doing this may be painful in the short run, it will do wonders for your long-term financial health. Generally speaking, you should look to pay off the debt which has the highest interest rates first. This will help you save a bit of money.

There are other things you can consider doing like asking for an increase in your credit limit. This will lower your utilization rate, an important determinant of your overall credit score. However you should only ask for an increase to your limit, if you’re using your credit cards responsibly.

Questions about our study? Contacts us at press@smartasset.com.