Where Workers Are Most Committed to Their Jobs 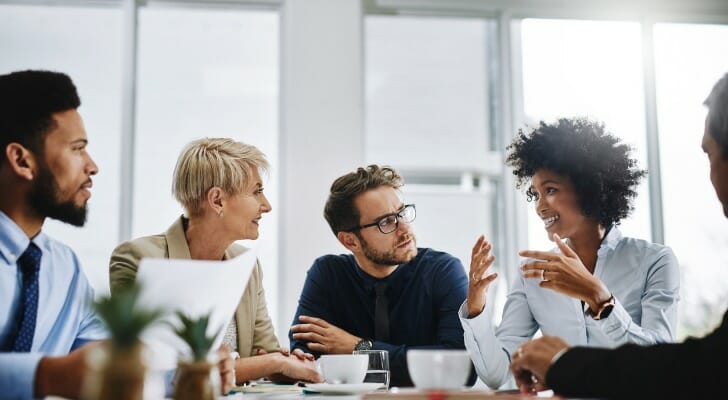 Feel like you’re slogging away at the office with no reprieve in sight? Maybe you’re grinding out those long days to show your loyalty to your company and nab a promotion? Sure, some American cities have well-established reputations for their hectic work schedules. In New York or San Francisco, for instance, it’s not unusual to hear about 80-hour workweeks. But when a worker clocks in and out of the office doesn’t tell the whole story with regard to how much leisure time he or she has available. Workers with extra-long commutes can spend inordinate amounts of time getting to and from the office to start their demanding shifts. What’s more, not all workers have a savings stash that allows them to afford a vacation, and some just can’t find it in their grueling careers to get a bit of a respite. Long days and little time off are sacrifices that demonstrate workers’ devotion to their professional lives. Below, we look at these and other factors to rank the places where workers are most committed to their jobs. 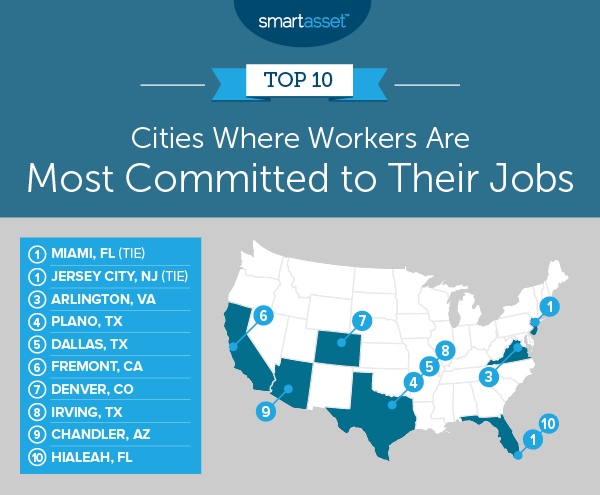 Miami takes the top spot. Nearly 86% of workers here work at least 48 weeks per year, the largest share in the country. That certainly doesn’t leave the average worker here with many weeks off for personal time. In total, the average Miami worker works 48.1 weeks per year. Workweeks for Miami workers are also long. More than 85% of workers work at least 35 hours per week, the third-highest share in the study.

More than 85% of Plano workers put in at least 48 weeks per year on the job. That is the second-highest rate in the study. In total, we estimate the average worker in Plano works about 47.7 weeks per year, another high score. Plano falls behind some other cities despite those high scores because of relatively easy commutes. Only about 44% of workers in Plano have a round-trip commute of at least one hour.

Dallas is the second Texas city to crack this top 10. Workers are highly committed to their jobs, as demonstrated by the hours they clock at the office each week. According to Census Bureau data, the average Dallas worker works more than 40 hours per week, a top-10 rate. Furthermore, only about 16% of workers here work less than 35 hours per week.

Some of the most committed workers in the country call Fremont their home. More than 85% of Fremont workers work at least 35 hours per week, the third-highest rate in the study. Workers are not just working long weeks here either. More than 84% of workers work at least 48 weeks per year. Fremont workers, though, get special recognition in this top 10 for their commutes. 59% of workers spend at least an hour each workday commuting.

Denver workers really keep their nose to the grindstone. According to Census Bureau estimates, you can expect the average Denver worker to work more than 40 hours per week. And that average is not just the result of a devoted cohort of workaholics. The commitment to work extends across the wider population. In fact, the vast majority of Denver workers put in at least 35 hours per week at work, showing their commitment. Commuters have a slightly easier time in Denver, compared to other cities though. Only about 39% of workers spend at least 30 minutes getting to work.

Workers throughout the Dallas metro area are committed to their jobs, according to our data. Irving workers take a spot in the top 10 because of their long workweeks. The average worker here works 40.4 hours per week, the fifth-most in the study. The workweeks are long but so are the years. Given that just under 83% of workers work at least 48 weeks per year, it’s easy to see that not many Irving workers spend much time on vacation.

Chandler is a great place to live for people who like to work hard and not spend too much time in traffic. This city has the second-lowest prevalence of workers with commutes of an hour or more in our top 10. But while the commutes are short, most workers here are committed to their jobs and put in long hours. More than 82% of workers in Chandler work at least 35 hours per week, and about 83% of workers work at least 48 weeks per year.

Finally, our list comes to Hialeah, Florida. Workers here, for the most part, are not highly paid and struggle to afford housing costs. Perhaps that explains why they put in long hours at work. Nearly 85% of workers here work 48 weeks per year. In fact, the average worker works 48 weeks per year. Another hardship workers here overcome on a daily basis: long commutes. Almost 51% of workers spend at least an hour per day getting to and from their place of work. 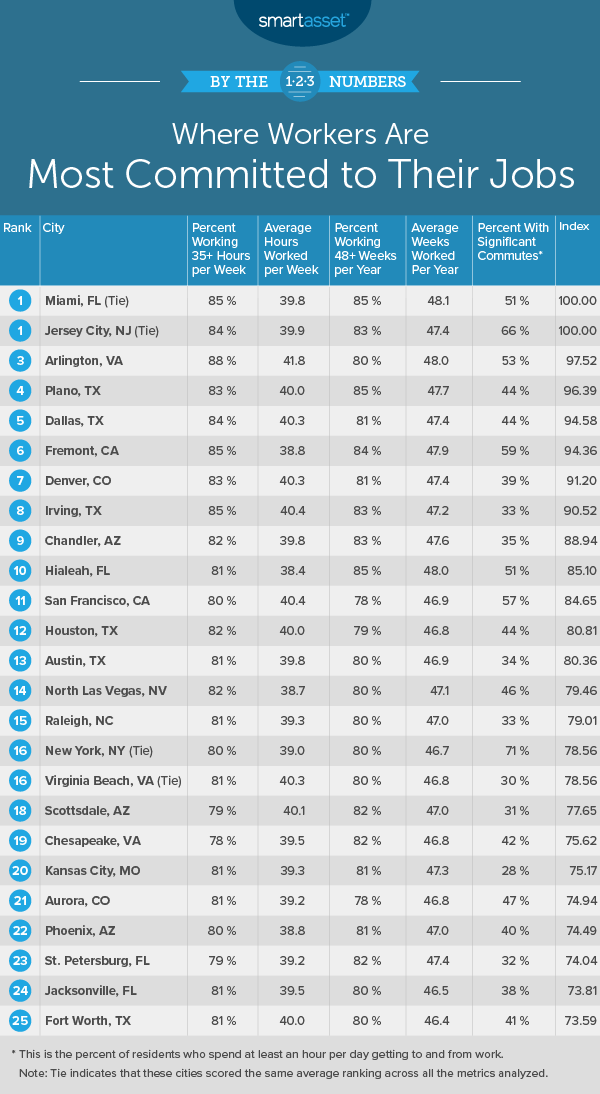 In order to find the places where workers are most committed to their jobs, we looked at data for 100 cities. Specifically, we compared them across the following five metrics: