Cities Where Women Are the Most Successful – 2019 Edition 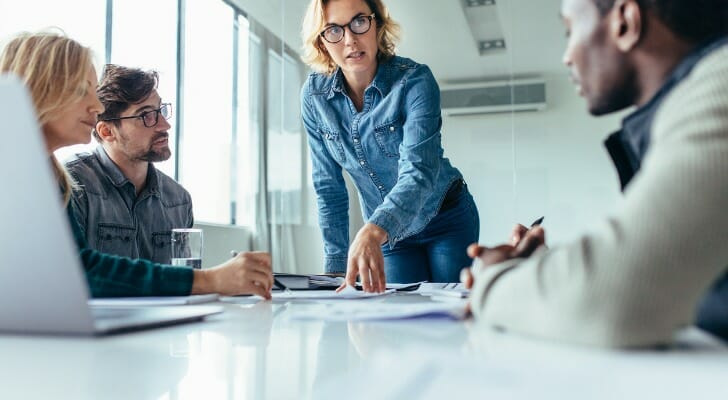 The latest data from the U.S. Census Bureau shows that women earn approximately 80% of what men do. Though the work to achieve pay gap equity is far from finished, it’s important to recognize the areas in which women in the workforce are making progress now in order to build upon these achievements in the future. Bureau of Labor Statistics (BLS) data shows that the unemployment rate for women (age 20 and older) was 3.40% in early 2019, which is the lowest unemployment rate for this demographic since 2000. The number of female business owners nationally has also grown more than 22% in the past five years. The more successful women are in places with favorable economic conditions for them, the more likely they are to tuck away money in a savings account for the future. To get a better idea of where women are finding the most success, we decided to dig deeper into the data.

This is SmartAsset’s second annual study on the cities where women are most successful. You can read the 2018 study here. 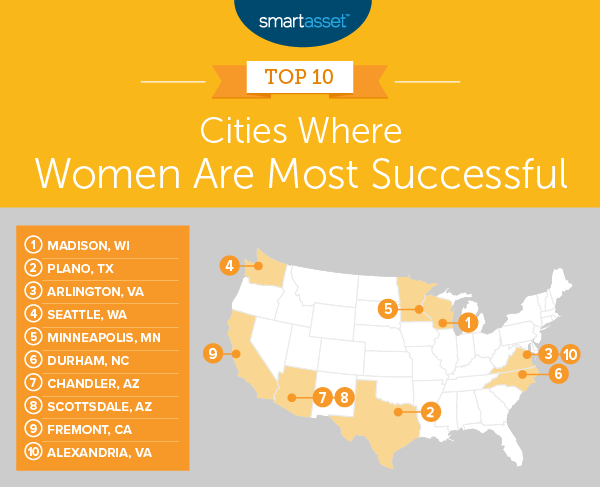 Moving up from No. 3 in last year’s ranking, Madison, Wisconsin now claims the No. 1 spot. Women here have an unemployment rate of just 1.60%. That’s the lowest in the study. (It’s also nearly half of the male unemployment rate in Madison, which is 3.10%.) Of course, beyond just having jobs, women in Madison also have substantial salaries. In fact, about 20% of women have an income of at least $75,000. Almost 30% of women in the city have a bachelor’s degree, which is the 13th-best rate in the study. Alongside the fact that Madison is the best city for work-life balance, Madison also has the sixth-highest rate of women business owners, at 41.70%.

Plano, Texas is up seven spots from No. 9 last year. The city’s female unemployment rate is 2.40%, which is below the national average. Census data also shows that 35.50% of women in Plano have a bachelor’s degree. That’s the fourth-highest rate in the study. Earnings for women are also relatively high. The median income for women is $52,028 and almost 28% of women have an income of $75,000 or more. Both of those figures are top-20 rates. The percentage of female business owners in the city is also relatively high, at 41%. Plano ranks in the top 10 for that metric.

One reason Plano doesn’t take the top spot is that its housing costs are relatively high. But don’t let that discourage you if you’re considering moving there: We found that it’s still one of the most livable cities in the U.S.

The data shows that 36% of women in Arlington, Virginia have a bachelor’s degree. That’s the second-highest rate of the 100 cities we considered. This could be one factor that explains why 53.40% of women have an annual income of at least $75,000. The median income for women here, $76,396, is the second-highest in our study. Relatively high incomes are perhaps one consequence of the fact that Arlington is one of the best cities for women in tech. Finally, the unemployment rate here sits at 2.30%, a top-3 rate.

Coming in at the third-highest percentage in our study, 35.80% of women in Seattle, Washington have a bachelor’s degree. Women’s incomes are also relatively high. The median income of $62,930 is the sixth-highest in our study. More than 40% of women here also have an income of at least $75,000. Seattle scored seventh-highest in that metric. The cost of living in Seattle is a bit high, however. Housing costs make up almost one third of women’s earnings.

Minneapolis, Minnesota ranks in the top 20 for all metrics except one. The unemployment rate of 3% and the 31.40% of women with a bachelor’s degree are both eighth-best rates in our study. Median earnings for women are more than $50,000 in Minneapolis, and almost 28% of women here earn $75,000 or more. If you’re thinking of moving to Minneapolis, you’ll be glad to know that housing costs in the city are also relatively affordable. They make up 27.60% of the median earnings for women. The only metric in which Minneapolis doesn’t rank within the top 20 is the percentage of business owners who are women. At 33.20%, the city ranks 58th.

Durham, North Carolina does well across the board. It ranks in the top third for all metrics. In fact, 27.60% of women here have a bachelor’s degree, and the median earnings are more than $45,000. Housing is also relatively affordable for women. In terms of housing costs as a percentage of the median income for women, Durham ranks in the top 25. But the biggest reason that Durham ranks so well is its high percentage of female business owners. Our data shows that 45.60% of business owners in the city are women. That’s the highest rate in this study.

Chandler, Arizona, which we’ve found is a great place for people trying to get out of debt, takes the No. 7 spot on our list. The median earnings of women in Chandler are more than $51,000. That’s the 13th-highest rate of all the cities we ranked. There is also a high percentage of the female population earning at least $75,000 (almost 28%), which is the 16th-best rate. Most notably, Chandler has the fourth-highest percentage of female business owners. A little more than 42% of business owners in the city are women. Two things that keep Chandler from ranking even higher are its relatively high housing costs and unemployment rate. Housing costs make up 31% of women’s earnings. The unemployment rate of 4.80% for women is also the highest in the top 10 by far.

Similarly to Minneapolis at number five, Scottsdale, Arizona ranks in the top 20 for all of our metrics except one: the percentage of business owners in the city who are women. The data shows that 27.60% of business owners are women. That’s the 13th-lowest rate in our study. But outside of that one metric, Scottsdale women have access to the building blocks of success. The unemployment rate for women is 1.80%, which is second-lowest in the study. By contrast, the unemployment rate for men in Scottsdale is 3.80%. The city ranks 10th for percentage of women with a bachelor’s degree, at 30.60%. Earnings figures are also high: The median earnings for women are $60,323, and more than 37% of women earn at least $75,000. Scottsdale ranks eighth for both of those metrics.

Another strength of the city is its affordable housing. That affordability could be a reason that Scottsdale ranks as one of the most popular destinations for retirees.

Women in Fremont, California are some of the highest earners in our study. The median income figure of $67,818 is third highest. Also third highest is the percentage of women who earn $75,000 or more: a whopping 45.40%. Almost one-third of women here have a bachelor’s degree. Fremont also has a high percentage of female business owners as well as a low unemployment rate, at 37.80% and 3.40% respectively. The cost of living here, however, is high. The average housing costs in Fremont, which include things like mortgages and property taxes, come to more than 41% of women’s earnings. That’s the 13th-highest rate in the study and means that women in the city are among the most housing-cost-burdened in country.

Rounding out the top 10, and securing a spot in the lineup for the second straight year, is Alexandria, Virginia. Median earnings for women here are approximately $65,000, and almost 45% of women earn at least $75,000. Those are both top-five scores. The city also scores in the top 10 for its high percentage of women with a bachelor’s degree (30.70%). Since last year, the city has also seen an increase in the percentage of female business owners. An impressive 35.20% of business owners in Alexandria are women. While Alexandria is one of the safest cities in America, however, it’s also a bit expensive. This affects its overall ranking. Even with its high income figures, housing costs equal about 33% of the full-time working woman’s earnings. 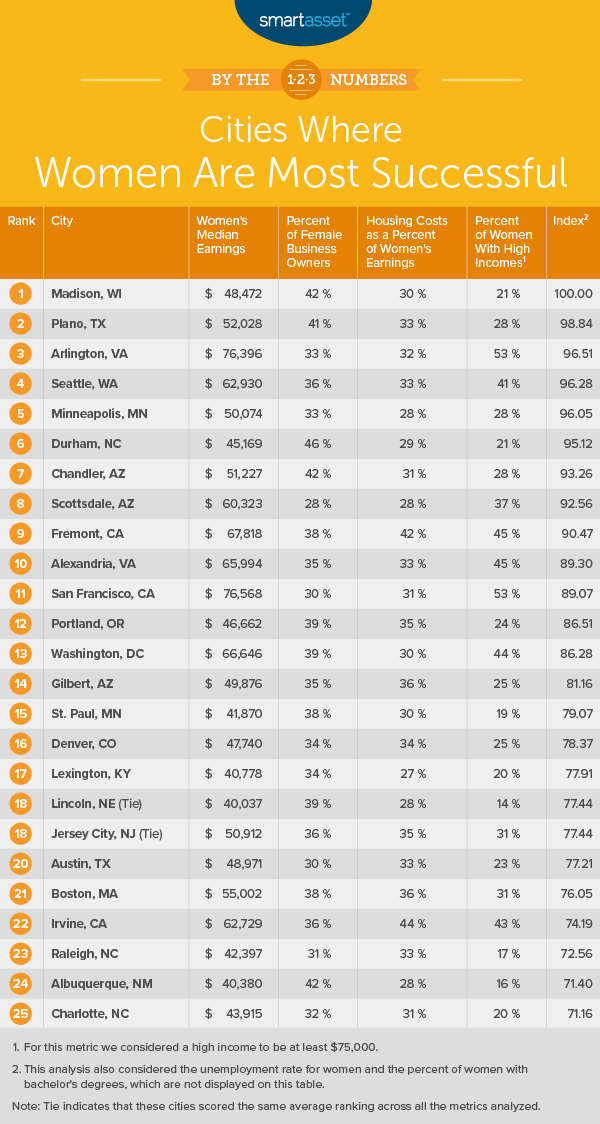 SmartAsset analyzed data on 100 cities to determine where women are most successful. We specifically looked at data for the following six metrics:

Data for all metrics comes from the Census Bureau’s 2017 1-year American Community Survey.