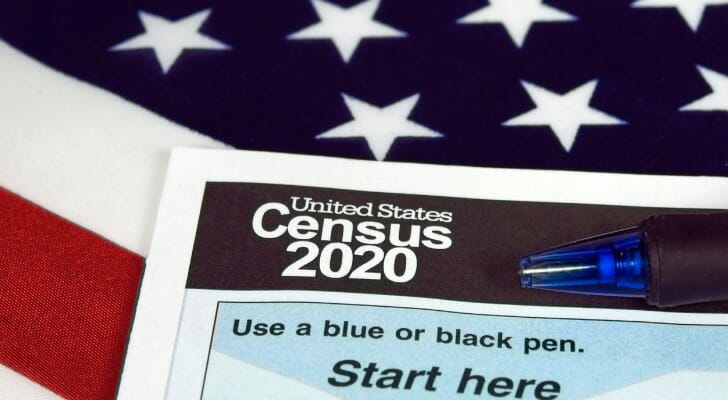 April 1, 2020 marked the original self-response deadline of the 24th Census in the U.S. As mandated by the constitution, the decennial count determines how many congressional seats each state gets, and this year will help inform the distribution of $1.50 trillion in federal funding. Beyond this, data collected by the Census is used regularly within public and private sectors. For instance, Medicare and Medicaid programs rely on the data to allocate funds across communities, while here at SmartAsset we use Census data to provide many free calculators to Americans and help them make smart financial decisions.

The Census Bureau largely depends on Americans to respond on their own and categorizes this portion of the population as “self-responding.” While there are many factors that come into play when considering how likely a household is to respond – such as immigration status, homelessness, poverty, education levels, age and disability – the Census has put a system in place to ensure that households that do not respond receive follow-ups. Though Census workers conduct these follow-ups via phone calls and in-person visits, households that self-respond help the Census Bureau save time and money while it continues to collect data. During the current global coronavirus pandemic, self-responses have become all the more imperative, as nonresponse follow-ups are increasingly difficult to conduct. April 1, Census Day – the day by which households are highly encouraged to reply – has passed. However, Census self-response operations, which typically last through mid-summer, will now continue through the end of October in 2020.

In this study, SmartAsset took a closer look at the 2020 Census and current self-response rates as of May 4, 2020. We compared data from the 2010 Census to this year’s count and analyzed self-response rates for 2020 thus far. Additionally, as 2020 is the first year that households can respond online, we examine the states and cities where the highest numbers of respondents are filling out the questionnaire online. For details on our data sources and how we put the information together to establish our findings, check out the Data and Methodology section below.

Mailings to all households:

Mailings to households that haven’t yet responded:

While the introduction of an online questionnaire option along with increased mailings may suggest that self-response rates in 2020 will be higher than they were in 2010, the COVID-19 pandemic may dampen or even negate the effects of those changes. While we will not be able to measure differences between the two years in any complete way until the 2020 Census is complete, the Census Bureau has begun publishing daily figures on self-response rates, which we take a look at below. 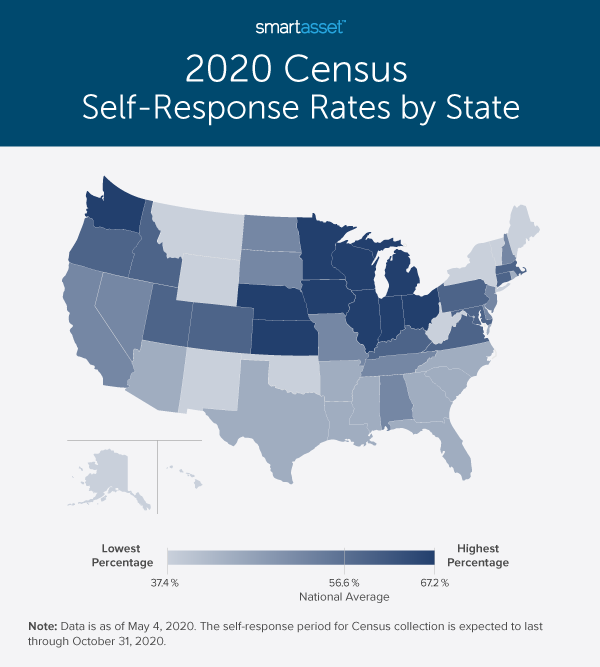 Beyond the top four Midwestern states with the highest self-response rates in the 2010 Census and thus far in the 2020 count, five more Midwestern states make it into the top 10 states with the highest response rates through the beginning of May this year. Those five states are Michigan, Illinois, Ohio, Kansas and Indiana. Washington State, ranking sixth overall, is the only state in the top 10 not located in the Midwest. As of May 4, 2020, 62.0% of households in Washington had completed their Census questionnaires.

Of the states with the lowest self-response rates, Alaska is at the bottom. As of May 4, 2020, only 37.4% of households in Alaska had responded to the 2020 Census, almost 7% lower than the state with the next lowest response rate, West Virginia. The state has historically had one of the lowest self-response rates, with much of the population living in remote areas. In fact, the Census Bureau notes that it begin operations early in Alaska “to reach parts…which may be difficult to reach later in the year and whose populations depart for other activities.”

The top 10 cities with the highest Census self-response rates as of May 4, 2020 are more geographically diverse than the top-ranking states, as seen in the map below. There are two Midwestern cities, six Western cities and two Southern cities at the top of the list. 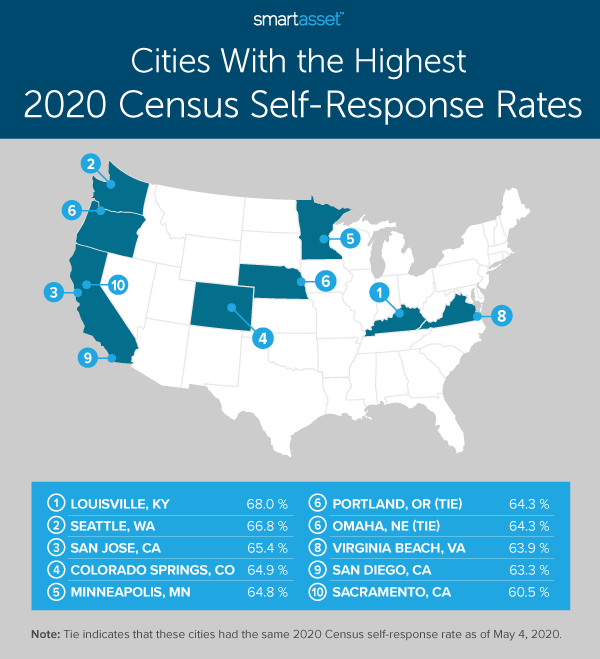 The most populous Northeastern cities fall behind in terms of Census self-response rates. Philadelphia, New York City and Boston all rank in the bottom 10, as seen below. As of May 4, 2020, less than 46% of households had responded to the 2020 Census online, by mail or by phone in both Philadelphia and New York City. In Boston, 47.0% of households had completed the questionnaire. 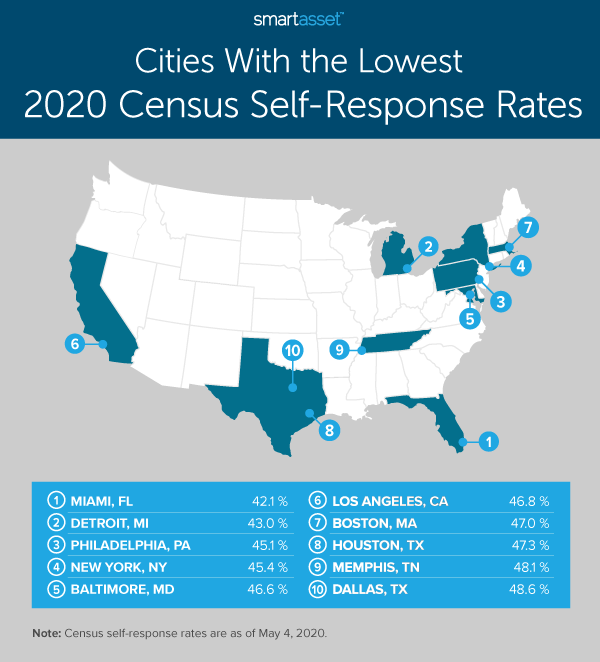 Nationally, 82.5% of questionnaires this calendar year have been completed via the online Census portal. Across states, that percentage ranges from 93.6% in Utah to only 62.0% in Mississippi. Interestingly, the state with the second-highest percentage of responses completed online is Alaska, suggesting that the introduction of the online response option has been helpful for those who live in more remote areas of the country.

Beyond Utah and Alaska, four more Western states, three Northeastern states and one Southern state make up the top 10 states with the highest percentage of 2020 Census responses completed online. The four other high-ranking Western states include Washington, Colorado, Idaho and Hawaii (technically designated a Western state by the Census Bureau). The top-ranking states of Minnesota, Wisconsin, Iowa and Nebraska fall behind in terms of uptake in the online Census response option. Minnesota ranks the highest, at 11th. As of May 4, 2020, the internet self-response rate in Minnesota was 57.8% and the total self-response rate was 67.2%. This means that about 86% of households completed the questionnaire online. In Wisconsin, Nebraska and Iowa, the percentages of households that completed the 2020 Census online through the beginning of May are 84.7%, 81.2% and 80.4%, respectively.

Seattle, Washington ranks as the city with the second-highest 2020 Census online self-response rate through the beginning of May, coming in just behind Austin. According to data published by the Census Bureau, the internet self-response rate was 62.7% compared to a total self-response rate of 66.8%. This means that 93.9% of the households in Seattle completed the survey online.

Detroit, Michigan stands out in terms of its low internet response rate. Only about one in four households in Detroit have responded to the 2020 questionnaire online through the beginning of May. With a total self-response rate of 43.0%, this means that less than 60% of households in Detroit who responded did so online. By comparison, in Memphis, Tennessee, the city ranking second-lowest, 73.0% of respondents had completed the Census online. The full data across the 50 largest cities is shown below, ranked from those with the highest percentage of respondents completing the questionnaire online to those with the lowest.

Tips for Helping Your Community and Making Smart Financial Decisions